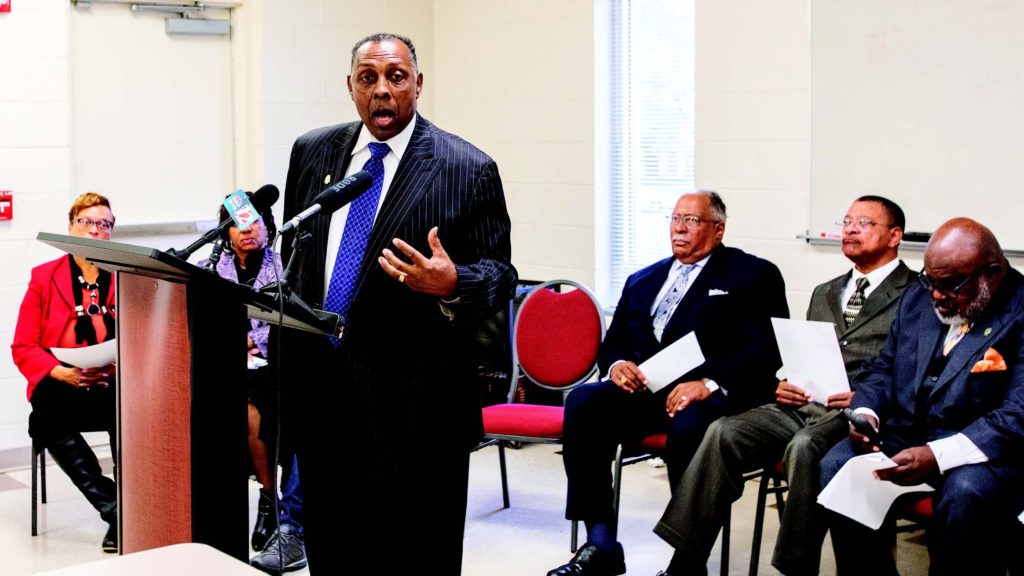 Rev. Nelson Johnson, former executive director of Beloved Community Center and a survivor of the Nov. 3, 1979 Greensboro Massacre, speaks during a press conference along with members of the Greensboro Pulpit Forum and Vicinity. The tragedy of Nov. 3, 1979 has been etched in his memory for the past forty years. Photo by Ivan S. Cutler/Carolina Peacemaker

“It is often said that confession is good for the soul,” said Rev. William F. Wright of New Zion Missionary Baptist Church at a press conference on October 22 about the 1979 Greensboro Massacre.

Wright was one of more than a dozen clergy members who have joined together with a request that the City of Greensboro issue “an apology of substance” for an attack on marchers by members of the Ku Klux Klan and American Nazi Party that is known as the 1979 Greensboro Massacre.

Forty years after Klansmen and Nazis drove an armed caravan into a march being held by the Communist Workers Party (CWP) leaving five protestors dead and 10 more injured, the community believes the city still hasn’t fully taken responsibility for its role in the incident. 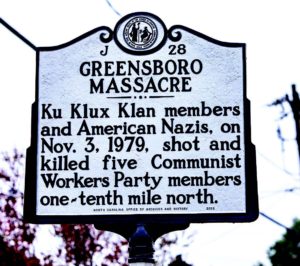 “It is our hope that as we reflect on the 40th anniversary commemoration, we pray that the City of Greensboro will acknowledge and offer heartfelt apologies to the families of the deceased and to the Black community of Greensboro,” said Rev. Wright.

On the morning of November 3, 1979, CWP members were participating in a workers’ rights demonstration at the Morningside Homes Housing complex in East Greensboro (now Willow Oaks). The CWP supported workers’ rights activism among mostly African American textile industrial workers in the area.

The clergy’s request for an apology lists seven reasons including the failure of the police to stop the attack when they had prior knowledge of it and failure to protect the protestors during the attack. The request also wants the city to apologize for any attempts to discredit the survivors, any attempts to cover-up the wrong doing of the Greensboro Police, and the city’s participation in restricting a comprehensive trial process.

Rev. Nelson Johnson, a Nov. 3 survivor and organizer for the 1979 rally, contends that in advance of the march, he was required by the Greensboro police to sign a form agreeing that he and his fellow protesters would not be armed. Fliers from the march labeled it a “Death to the Klan” march, and Johnson has since publicly apologized for the language used and any role it played in that day.

“It was not about expecting a fight with the Klan. We thought the police were going to be there,” said Johnson. “All of this is not the doing of this city council, but it’s the city council’s responsibility now to understand this and set it right. No one can do this for Greensboro except the current city council.”

The narrative is that the Greensboro police had prior knowledge of the impending attack from a Klansmen police informant as well as photographs of the Klansmen and Nazis loading guns into their cars, yet did nothing to stop the attack or protect protestors during the attack. The violent assault lasted 88 seconds and was captured on film by press; however, two all-White North Carolina juries in the criminal trials acquitted the Klan and neo-Nazi defendants. The five people that were killed were Sandi Smith, Dr. James Waller, Bill Sampson, Cesar Cauce and Dr. Michael Nathan.

In a 1985 Federal Civil Rights suit filed following the acquittals, a jury found two Greensboro Police officers, two Klansmen, and four Nazis liable for the wrongful death of Dr. Michael Nathan — the only non-CWP member. The city was also ordered to pay $351,000 to Nathan’s estate.

Greensboro residents and survivors of Nov. 3 came together in 2004 to develop the Greensboro Truth and Reconciliation Commission (TRC) to gather pertinent information and offer recommendations on how to help the community heal. Seven commissioners (five women and two men) convened public hearings to gather firsthand testimony from community members, survivors, Greensboro police officers and even former members of the KKK and American Nazi Party. The Greensboro TRC released a 400-page report in 2006 with nine recommendations that included that the city and the Greensboro Police Department issue an apology, that the history of the event be added to local school curriculum and taught to students, as well as mandatory antiracism training for all city and county employees.

The 2006 Greensboro City Council, under former Mayor Keith Holliday’s direction, voted to reject the TRC report and recommendations. The community came back to the Greensboro City Council in June 2009 with an apology request, but the Greensboro City council declined to issue a formal apology and in a five to four vote, decided to issue “a statement of regret” instead.
A marker to recognize the events of November 3, 1979, was erected in May 2015 by the N.C. Highway Historical Marker Advisory Committee and stands at the intersection of McConnell Road and Willow Road in Greensboro.

After more community pressure in August 2017, the Greensboro City Council agreed to apologize for the city’s role in the 1979 Greensboro Massacre in a seven to one vote. At the time, the council agreed they would review the TRC report and consider a more formal apology in the future. To the public’s knowledge, no subsequent written apology was ever drafted.
Sharon Hightower, District 1 Greensboro City Council member, who made the motion at the 2017 meeting for the council to apologize, noted that she is open to discussion with the clergy and the survivors about their demands.

“I want the council to have an open and honest discussion with them. I want us to compare what they are asking for with what we said in 2017. But more importantly, I want us to get to a place of healing,” said Hightower. “For some people it was something that happened 40 years ago, to others, it feels as if it just happened yesterday.”

In the 2019 apology request, the clergy and survivors are also asking for the city to denounce the 2006 city council’s vote to oppose the TRC process and the city’s disregard for a 2017 letter sent to each council member requesting “an apology of substance” for the Greensboro Massacre.

The Beloved Community Center is hosting a series of events on November 1 through 3 called “Greensboro Massacre: Lessons for Today” to commemorate and acknowledge the cultural and movement-building events in Greensboro and around the country.

The group says moving forward they want the city to be accountable to any processes that are put in place to address race relations.

“What we laid out here is for the good of all Greensboro — being accountable to the measures that are set in place and responsibly policing the entire city in a fair and equitable way,” said Rev. Daran Mitchell of Trinity AME Zion Church and president of the Greensboro Pulpit Forum. “So it’s not just saying, ‘sorry’ for an offense, it’s about actually changing your mindset so that you don’t repeat the same behavior that caused the offense.”