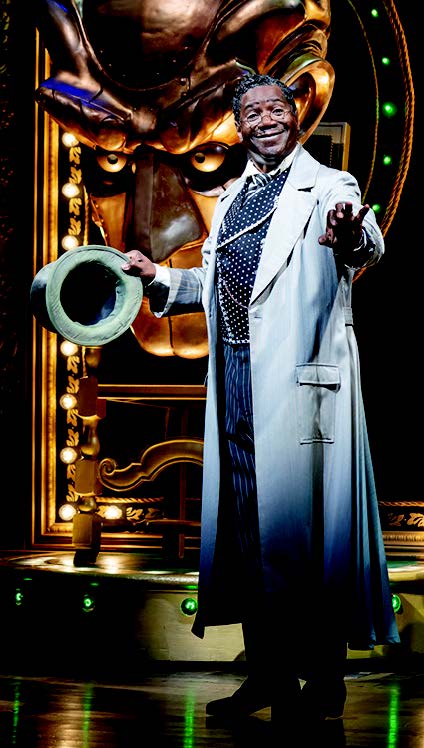 Cleavant Derricks as The Wizard

Actor Cleavant Derricks is portraying one of the most notable characters in literary history. The Wizard, who was first introduced in the film “The Wizard of Oz” and then Broadway play, WICKED.

After sitting down for a year, the actors are back on the road. They have already completed stays in Dallas and Los Angeles and will spend three weeks at the Steven B. Tanger Performing Arts Center in downtown Greensboro.

He first participated on the Broadway production of Dreamgirls (Tony and Drama Desk award for Best Featured Actor and L.A. Drama Critics Circle Award for Vocal Arrangements), Bob Fosse’s Big Deal (Tony and Drama Desk award nominations for Best Actor), Vinette Carroll’s Your Arms Too Short to Box with God and But Never Jam Today. He was also in the Revival of Hair, Brooklyn The Musical, and won the NAACP Theatre Award for Best Actor in the Broadway national tour of The Full Monty. He also has notable film credits in Moscow on the Hudson, The Slugger’s Wife, Offbeat, Carnival of Souls, Bluffing It, and World Traveler, as well as a TV series regular on “Sliders,” “Thea,” “Drexell Class,” “Good Sports,” and “Woops.”

Growing up in the South as the son of a Tennessee minister, Derricks said he’s always had an affinity for the arts and active imagination.

“I’ve always had it in me. That’s all I did as a kid. I played make believe. When you have fields and woods to play in, and you got your parents’ 8 mm camera and you’re doing paper routes to buy film to make movies, and recreating Black Tarzan. Make believe is how I grew up. That was my joy. So I know there are kids out there like that,” he said.

He recounted a childhood memory of his first time seeing famous actress, Leslie Uggams perform on The Ed Sullivan variety show that stayed in his mind.

“That blew us all away. It never left my mind.”

That is one reason why representation in theatre is important to Derricks. He first appeared on Broadway in New York in 1977.

“This is a job that I’ve done for many, many years. I think people have come to accept – especially after Dreamgirls – that African Americans are here to stay as far as musical theatre goes.”
In saying that, Derricks also applauded the regional theatres that work to put on productions that showcase African American talent, although many did not survive the pandemic shutdown in 2020.

“What I think the problem is that there aren’t enough African American people that know how to approach coming to a theatre to investigate what the shows are about or if there are African Americans in the shows.”

He added, “And it’s not about whether they can afford it or not, but whether they know that we’re being represented in theatre. There are the African Americans that I am concerned about that can’t afford to come to a show like this and young kids who have it in their hearts and in their minds to want to do theatre and if they were only able to see it, it would stimulate their hearts and minds to go after their dreams.”

Derricks said that when approaching how to play the character of the Wizard, he made sure to bring some of his own background into the role.

“I simply bring what Cleavant is to the character. The character itself has already been formed thru the script. When I’m looking at him (The Wizard), I’m looking at him as a man who left the South, traveled during the great migration of African Americans when they went North and to the Midwest. He’s an intelligent guy who is a wanderer and a hustler in life.”

He went on to explain how many African Americans traveled, and he sees The Wizard as just one of these people that did that.

“There was nothing left for him where he was from. These are the things I incorporate into my character. You can’t take the Southern flavor that I have in my voice away from me. So that’s what I take and use all of that to bring to the character,” said Derricks.

He noted that the rise in diversity can be seen more in music, TV and film, and in occupations like doctors, professors, business owners and even have reached the highest level of government, but theatre is the last to evolve.

“Theatre is one of the last stomping grounds where we hope to get a lot of African Americans and particularly young people who don’t know about the plays in their communities that they can come to see. That is a stimulant for anybody who has it within them to do theatre,” said Derricks.

He also discussed the importance of arts programs that can empower communities and deter the youth from negative activities.

He describes WICKED as, “a story within a fantasy world that’s been out so many years, in a changing world, but it still attracts people.”

Now the 5th longest running show in Broadway history, WICKED is the winner of more than 100 international awards including a Grammy Award and three Tony Awards. Since opening in 2003, WICKED has been performed in more than 100 cities in 16 countries around the world.

“If people can still see that, then that means it is a show that has something for everybody. And that can inspire someone to say I want to write a show like that, or I want to be involved in a show like that. That’s why I feel that musical theatre is important. It stretches the mind beyond where people are. It’s a world of imagination and a small escape from reality. It can give you a whole new idea on what is possible. That is why I do theatre,” said Derricks.