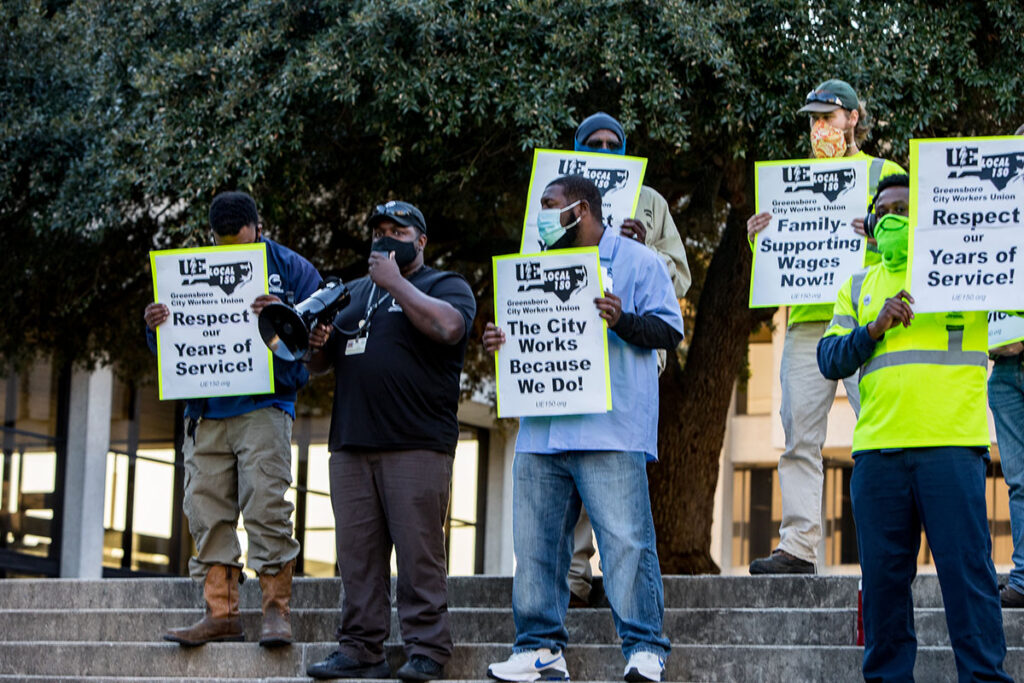 “No justice, no peace. Respect our years of service.”

Greensboro City Workers Union, chapter of UE Local 150 held a rally ahead of the Greensboro City Council meeting on November 2, addressing years of low wages and unfair retirement pensions for workers with years of service.

The Greensboro City Workers Union, chapter of UE Local 150 has been advocating for the city to move away from the merit-only pay system, to one that includes a Step Pay Plan for the last four years. The city has included a Step Pay plan into the FY2022 budget. However, workers are concerned that without bringing people up into the step plan based on their seniority, the dozens of years of unfair merit pay and racism will be cemented into their pay.

They are asking the city to follow the lead of neighboring cities such as Charlotte, Raleigh and Durham, which each implemented a Step Pay Plan, and corrected workers’ wages according to their years of service. Greensboro Police and Fire Departments have also had Step Plans for many years.

“The senior workers that carry the city and train all the new employees feel very disrespected by this current version of the Step Pay Plan,” stated Ramone Johnson, president of the Greensboro City Workers Union, UE150 and crew leader in the Water Resources department. Johnson continued, “The Step Plan is an important advance towards more fairness, but without recognizing our years of service, there is no justice.”

Merit pay rewards employees with raises, bonuses or other forms of financial compensation. Instead of tying performance rewards solely to time on the job, employers give rewards for superior performance in the form of an annual variable payment. Step pay plans provide a salary structure with standard salary increases based on established criteria like tenure in a position or job performance.

“You have guys who have 20 plus years that are only making $30,000 and they put the step plan in and guys are getting hired at $31,200,” said Ramone Johnson, who also shared that a fellow employee (anonymous) only received $50 when he retired from the City of Greensboro last year.

Union member and Field Operations employee Bryce Carter shared that as the son of a retired teacher and city worker, he understands what years of service means and that the workers who are not getting their fair pay are the same ones who have continued to work for the city through some of its most trying times.

“These are the same guys that stuck with you through all the years of budget cuts and restraints. These are the guys that stuck with you through the 2008 recession, through a pandemic ― we were there. The whole point of working for years is that at some point you can sit back and enjoy the fruits of your labor. Years of service have to matter at some point.”

Christopher Yancey, an employee in the Field Operations department noted that understaffing and overworking is a major problem.

“There is only one city truck to address water and sewer issues for the whole city on the weekends,” said Yancey. “The City of Greensboro is the third largest city in North Carolina, yet we are treated like a small city. If we want to retain good workers in a good city, we should pay our workers. Get behind the workers. We are you. The workers take care of the city for everyone, so the city should take care of its workers.”

According to Assistant City manager Larry Davis, the city does not pay under $15 an hour for full time employees so steps 1-5 of the plan are off the table and new hires come in at step 6 and work their way up to step 15. Then you graduate to a merit-based program, which is what the police and fire departments have now.

Interim City Manager Chris Wilson said staff has been researching Durham’s step pay plan, but it is harder to study Charlotte and Raleigh now because they have discontinued their step plans.

“I want to give it the due consideration that the employees would want and then I want to have a conversation with our employees to make sure I’m hitting the mark,” said Wilson.