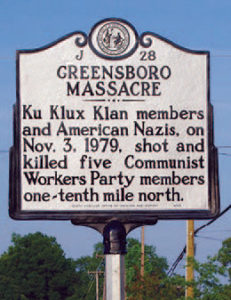 The Greensboro City Council passed a resolution to issue a formal apology to the survivors and families of the victims for the events of the 1979 Greensboro Massacre.

The resolution passed 7 to 2, with Councilmembers Marikay Abuzuaiter (at-large) and Nancy Hoffman (District 4) voting against the resolution.

At its October 6 meeting, the council finally adopted the formal apology they had voted to give the community back in 2017. This year will mark the 41st anniversary of the violent attack by Klansmen and Nazis that left five dead and many others wounded.

On the morning of November 3, 1979, Communist Workers Party members were participating in a workers’ rights demonstration at the Morningside Homes Housing complex in East Greensboro (now Willow Oaks). The CWP supported workers’ rights activism among mostly Black textile industrial workers in the area.

It was revealed through a civil trial that the Greensboro police had prior knowledge of the impending attack from a Klansmen police informant as well as photographs of the Klansmen and Nazis loading guns into their cars, yet did nothing to stop the attack or protect protestors during the attack. The KKK and Neo-Nazi defendants claimed self-defense and were acquitted of criminal charges in a state and a federal trial, both times by all-White juries. A civil jury later found six members of the Ku Klux Klan and the American Nazi Party and two Greensboro police officers liable for wrongful death in connection with the Greensboro Massacre and the city was ordered to pay a settlement to the family of one victim.

“I wish this event had never occurred. We always grieve the loss of life. But I find nothing in this contemporaneous reporting of this event that convinces me of collusion or malicious action or inaction on the part of the Greensboro Police Department or city personnel,” said Hoffmann.

Mayor Nancy Vaughan made it clear that the apology was not a criticism of the current police department, but about acknowledging hard truths of the past.

“We say what we’re apologizing for and that’s what we’re trying to do this evening, to recognize the shortcomings of our past,” Vaughan said.

“The City Council of the City of Greensboro hereby expresses its apology to the victims, the survivors, their families and the members of the Morningside Homes community for the events that occurred on November 3, 1979 and the failure of any government action to effectively overcome the hate that precipitated the violence, to embrace the sorrow that resulted from the violence, and to reconcile all the vestiges of those heinous events in the years subsequent to 1979.”

Rev. Gregory Headen, member of the Greensboro Pulpit Forum of Clergy said the apology was a good step in the right direction.

“We are persuaded that the apology is heartfelt. This will be a big step for healing and opening trust between the city and community. It also signals that Greensboro is able and willing to offer moral leadership for the nation in times of this racial division and profound suspicions of the legal justice system,” he said.

The approved resolution also creates the “Morningside Homes Memorial Scholarships” for graduating seniors at James B. Dudley High School in the names of the five people who lost their lives. Scholarships will be named in the memory of Cesar Cauce, Dr. James Waller, William Evan Sampson, Sandra Neely Smith and Dr. Michael Nathan, who were all killed in the attack. Each scholarship will be provided annually in the amount of $1,979.

The 2006 Greensboro City Council, under former Mayor Keith Holliday’s direction, voted to reject the commission’s recommendations and some council members expressed regret over the incident. The community came back to the Greensboro City Council in June 2009 with an apology request, but the Greensboro City council declined to issue a formal apology and in a 5 to 4 vote, decided to issue “a statement of regret” instead. A marker to recognize the events of November 3, 1979, was erected in May 2015 by the N.C. Highway Historical Marker Advisory Committee and stands at the intersection of McConnell Road and Willow Road in Greensboro.

The new resolution also acknowledges the establishment of a standing commission reporting directly to the City Council and the City Manager called the Greensboro Criminal Justice Advisory Commission (GCJAC) and its subcommittee, the Police Community Review Board (PCRB), a livable wage for city employees, diversity training for all city employees, the establishment of a Diversity and Inclusion Officer, and the development of the City’s Minority and Women Owned Business Enterprise Program (MWBE).

Councilmember Hightower said it was long overdue and when tragedies like these occur, the city has to acknowledge what is wrong.

“We have done our due diligence. While we can find reasons not to do something, sometimes it’s just the right thing to do. This is the right thing to do to start the healing process in Greensboro. We have to say this is what we support. This will help a group a individuals that live among us that this will impact for years to come,” Hightower said.