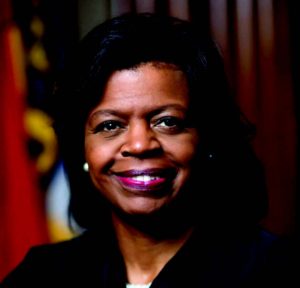 It was as if all of North Carolina state government had stopped on March 7th at 2 p.m. to recognize that a true moment in history was about to take place.

More than a thousand well-wishers, including Democratic Gov. Roy Cooper, and Chief Justice of the N.C. Supreme Court Emeritus Henry Frye, the first African American ever to hold that esteemed title, assembled in the state Supreme Court chambers and overflow satellite locations at the State Capitol and First Baptist Church across the street, to witness the formal swearing in of Chief Justice Cheri Beasley, the first African American woman ever to officially lead North Carolina’s High Court.

The court remained all-White for 155 years prior to Frye’s appointment by then-Gov. James B. Hunt. There have been seven African Americans in all to serve on the state Supreme Court, and eight women.

Beasley was officially sworn-in on March 1 in her office during a private ceremony, so this was her public investiture as the state’s 29th chief justice in the 200-year history of court. She was appointed by Gov. Cooper to finish out the unexpired term of former Chief Justice Mark Martin when he recently retired to become a law school dean in Virginia.

Chief Justice Beasley is only the fourth African American woman in the nation to ever serve in her capacity on a state Supreme Court. As chief justice, she leads the third branch of North Carolina government, and is responsible for running the state court system, in addition to determining the Supreme Court calendar and rendering decisions with her colleagues on the court.
Beasley is also one of three African Americans on the N.C. Supreme Court, the most of any state in the nation.

After remarks from various dignitaries, including Gov. Cooper, as she stood with her husband and twin sons, Chief Justice Beasley formally took the oath of office from Senior Associate Justice Paul Newby, before going to chambers amidst a round of applause, reemerging in her judicial robe, and taking the center seat on the court to offer remarks.

“I am honored and humbled to receive Governor Cooper’s appointment as Chief Justice. The magnitude of this opportunity to serve all North Carolinians is certainly not lost on me,” said Chief Justice Beasley. “I look forward to continuing to work to improve access to the courts and to ensure that our citizens have a judiciary that they trust to administer justice fairly, equally, and swiftly.”

“Today is really a day of hope,” Beasley later said. “It’s a day of hope for justice — really for all of us.”

Chief Justice Beasley was originally appointed to the N.C. Supreme Court as an associate justice in 2014 to finish out the term of Justice Patricia Timmons-Goodson. Beasley then ran and won her election in 2014 to a full eight-year term. Prior to that, she served as a state appellate court judge and a District Court judge for ten years in Cumberland County.

By becoming chief justice, Beasley finishes out Mark Martin’s term, and has indicated that she will run to be elected for that seat when it expires in 2020.