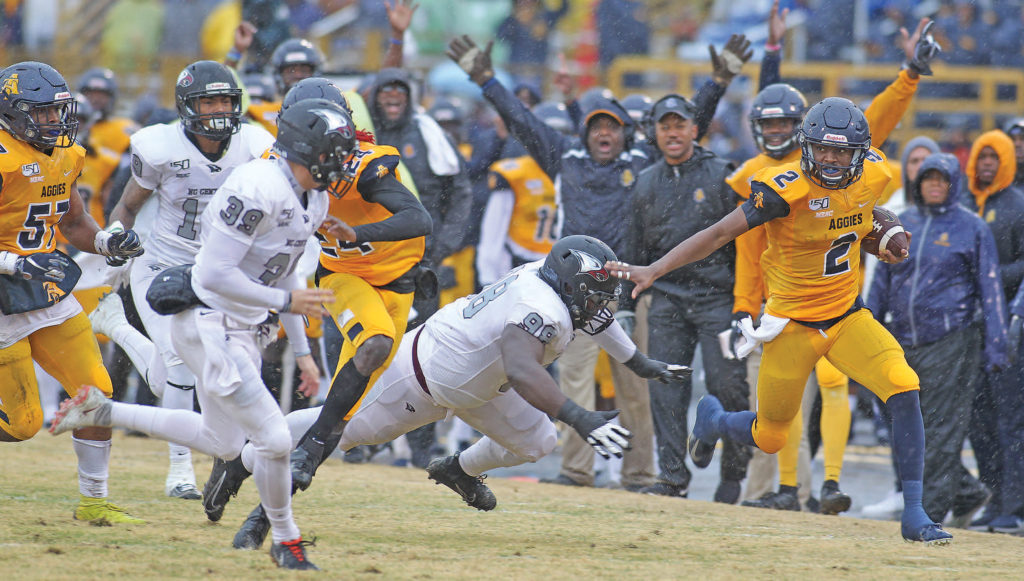 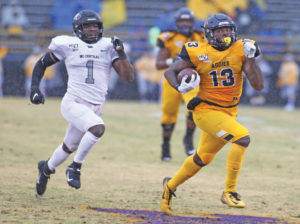 It’s was cold. It was rainy. And it was glorious.

On the final afternoon of the 2019 regular season, A&T overcame awful weather and field conditions to throttle North Carolina Central 54-0 last Saturday to earn yet another trip to the Celebration Bowl in Atlanta.

In what was their most convincing performance of the year, the Aggies dominated the Eagles in every way imaginable, even eclipsing the 45-0 beatdown they delivered to Central in Durham a season ago.

The win improved A&T’s overall record to 8-3 on the year, propelled them to No. 23 in the national polls, and gave the Aggies a share of their third consecutive Mid-Eastern Athletic Conference title. A head-to-head victory over 8-3 South Carolina State earlier this month meant the Aggies had earned the conference tiebreaker and will represent the MEAC in Atlanta on December 21 at Mercedes-Benz Stadium.

A&T now has nearly a month to rest up for what is considered the HBCU National Football Championship game and begin preparations to face the eventual champion of the Southwestern Athletic Conference – most likely Alcorn State, Grambling or Southern.

“It’s special,” said second year A&T head coach Sam Washington. “I know very little champions that 3-peat, and I’ve been in this business for a very long time. It’s just something that just doesn’t happen, so it’s special. We look forward to the opportunity of defending our title.” 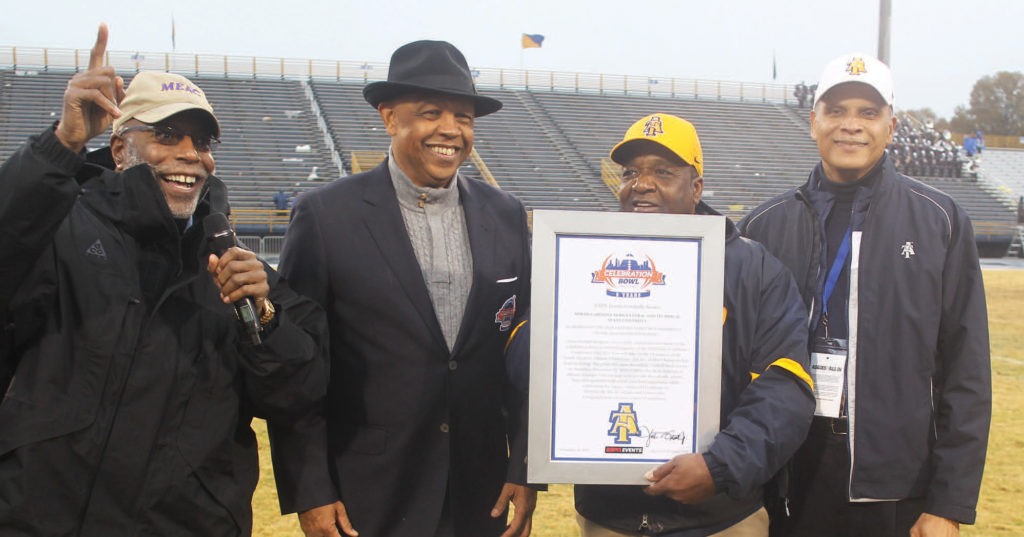 Since suffering an embarrassing 22-16 loss to Morgan State on November 9, the Aggies have corrected their discipline issues and routed their last two opponents by a combined score of 101-17.

Entering the week, A&T was billed as heavy favorites against the 4-7 Eagles, who were coming off two straight lopsided home losses against Norfolk State and South Carolina State. Yet, because of the fierce rivalry between the two schools and the likelihood of heavy rain in the forecast, some pundits gave Central a small chance of pulling off the upset and ruining A&T’s postseason plans. Almost immediately, however, those concerns were put to rest as A&T scored touchdowns on three of its first four offensive possessions and cruised to a 30-0 lead by halftime. 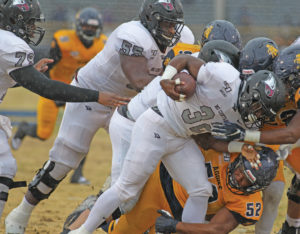 “I thought they prepared well this week and I think that’s where it all started,” said Washington. “Last week’s practices were highly intense. There was a lot of good energy and a lot of good effort. I think it carried over into the ballgame.”

To understand just how impressive this victory was, consider these statistics:

“Defensively, this is one of the best outcomes in my history,” said Washington. “Statistically, this is absolutely the most complete game we’ve played this year. You’d like to think you get better each week. That’s what happened. The Morgan game was just awful, but it brought us closer together and gave us that reality check that if you don’t prepare, you don’t win. It hit home, and it’s showed in the last two ballgames what we’re capable of doing.”