Celebrate the 50th Anniversay of the Apollo 11 Lunar Landing 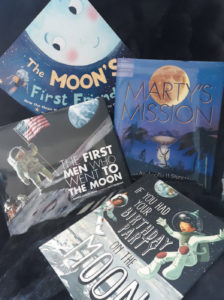 Here are four books about the moon to make any reader swoon.

Sometimes, on a clear summer night, the moon seems like it’s right down the block.

It’s big and bright, and you can just imagine visiting there. What would it look like? How would you live, if you moved to the moon? You may find the answers to those questions and the story of an exciting day by picking up these great books…

For the littlest sky-watcher “The Moon’s First Friends” by Susanna Leonard Hill, illustrated by Elisa Paganelli, gives the orb a certain friendliness. Through the centuries, as this tale goes, the moon observed everything that happened on Earth, occasionally razzle-dazzling humans until finally, she had visitors. This is a cute story and, for curious 3-to-5-year-olds, there’s a nice afterword you can read, too.

For the child with a great imagination, “If You Had Your Birthday Party on the Moon” by Joyce Lapin, illustrated by Simona Ceccarelli, could be just the right gift. Mixing fun with fact, this book imagines a celebration on “the perfect party site,” complete with pre-flight prep, tips on moving around in zero-gravity, and games your child might play on the lunar surface. For a 5-to-7-year-old who loves a party, this book is a five-star read.

For the youngster who is truly fascinated by that which happened long before her birth, “The First Men Who Went to the Moon” by Rhonda Gowler Greene, illustrated by Scott Brundage is a book that will be absolutely enthralling. Filled with lots of pictures and surprisingly gentle narrative, this is a quiet tale that’s also nicely informative in a show-not-tell way. For that, it’s perfect for 3-to-5-year-olds’ bedtime or after a little moon-watching.

Finally, based on a true story, “Marty’s Mission: An Apollo 11 Story” by Judy Young, illustrated by David Miles is about a young boy whose father managed a NASA tracking station on the island of Guam. When something goes terribly wrong during the return of Apollo 11, ten-year-old Marty is the one to save the day. Meant for slightly older kids (ages 6-10) this colorfully illustrated book is a true thriller.

Absolutely, your child is too young to remember what happened fifty years ago. You may not remember it either, but these four books are great introductions to the history-making Apollo 11 landing and to space exploration in general.

What’s really nice about each of these books is that they are factual without being too technical for little minds to grasp. Yes, there’s some grown-up language in them but in each book, it appears alongside a child-friendly story, next to illustrations that will hold little stargazers still. Should a child want to know more, each book offers that in extra information found toward the back covers.

Be aware that, though these stories are for kids of a variety of ages, they’re formatted like picture books for smaller children so that’s where you may find them. If you have a child who’s fascinated with space travel and reaching for the stars, though, these books will put him or her over the moon.