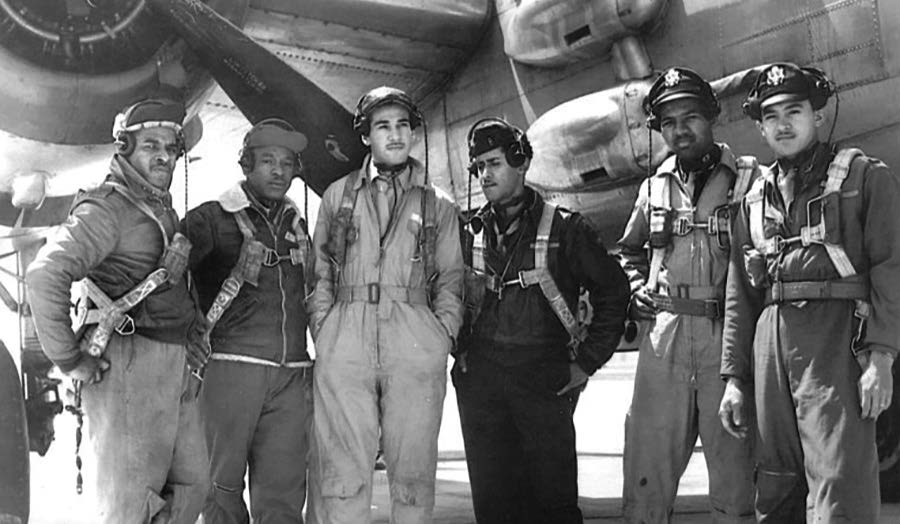 Tuskegee Airman, Harvey Alexander, far right, with his flight crew. Alexander was a longtime Greensboro resident. Artifacts from his days as a Tuskegee Airman are on display at the International Civil Rights Center and Museum in downtown Greensboro.

Black History Month celebrations look different this year, as many events across the city are being held virtually.

The story behind Black History Month starts more than half a century ago. It was created by noted Harvard-trained historian Carter G. Woodson and the minister Jesse E. Moorland after they founded the Association for the Study of Negro Life and History (ASNLH) in 1915. The organization was formed with a commitment to researching and promoting achievements by Black Americans and other peoples of African descent. The first Negro History Week was observed in 1926. Originally set the second week in February, the event inspired schools and communities nationwide to organize local celebrations, establish history clubs, host performances and lectures; activities that are still a part of that tradition today.

By the late 1960s, Negro History Week had evolved into month-long observations on many college campuses, particularly at HBCUs. President Gerald Ford officially recognized Black History Month in 1976, but it wasn’t until 1986 that President Ronald Reagan issued a proclamation that observes February as National Black History Month.

Still in operation, the ASNLH chooses an annual theme for each February. The Black History Month 2021 theme is, “The Black Family: Representation, Identity, and Diversity.”

Black History Month in Greensboro always kicks off with ceremonies honoring the “A&T Four,” on February 1. On that date in 1960, four students from N.C. A&T College — Joseph McNeil, Ezell Blair Jr., (now Jibreel Khazan) and the late David Richmond and the late Franklin McCain — led the charge that would spark a series of sit-in protests to include students from surrounding colleges and high school students during the summer. The protests led to the desegregation of dining establishments and other businesses across the country.

Traditionally, the university honors the A&T Four every year on campus with an in-person breakfast program, guest speakers, a laying of the wreath ceremony, panel discussions, and other long-standing activities. But, due to the COVID-19 pandemic, this year’s ceremonies were virtual. The online presentation titled, “It’s About Us,” featured tributes from current N.C. A&T students and alumni, representatives from Dudley High School Academy, Bennett College, family members of the four, and the traditional solemn wreath-laying ceremony.

The International Civil Rights Center and Museum, created from the desire to honor the A&T Four and other stories of African Americans, also presented its annual fundraising gala in a virtual program on January 30. The annual Black and White Gala honors civil rights leaders and advocates for their contributions to the movement. This year’s Civil Rights Gala honored the 61st anniversary of the A&T Four’s February 1, 1960, lunch counter sit-in at Greensboro’s F.W. Woolworth at 134 South Elm Street, the home of the museum.

A limited in person experience is also available next week. John L. Swaine, chief executive officer, said the Center & Museum’s auditorium will seat only 40 physically distanced viewers for COVID-19 compliance, Monday through Friday, at 4 p.m. February 8 to 12. Reservation required at www.sitinmovement.org or call (336) 274-9199. No walkups. Online access via YouTube through the ICRCM’s website.

The Greensboro History Museum is also offering a virtual exhibit in recognition of Black History Month. The “Pieces of Now” virtual exhibit is a collection of music and art from Greensboro’s Black Lives Matter movement that visitors can view from the safety of their computer screens. It also includes interviews from local leaders and activists that can be accessed from the museum’s website.