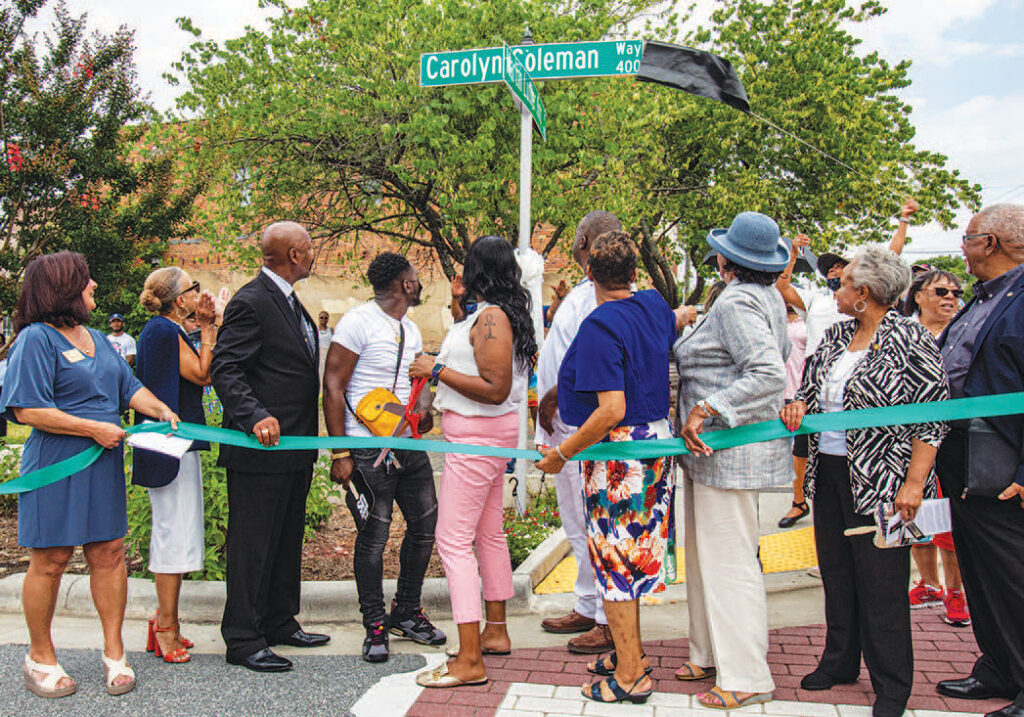 Dignitaries and members of the public watch as the street sign on Carolyn Coleman Way is unveiled on July 9. The street was named after the late Carolyn Coleman, who was the Guilford County Commissioner for District 7 and a civil rights activist. She died in January. Photo by Joseph Navin/Carolina Peacemaker.

Community leaders and elected officials joined scores of friends and family members of the late Guilford County Commissioner Carolyn Q. Coleman to herald her life of courageous civil rights advocacy and public service in dedicating a street in her name — Carolyn Coleman Way bisecting Martin Luther King Drive in Greensboro.
At New Zion Missionary Baptist Church, the outdoor dedication ceremony took place at New Zion Missionary Baptist Church where Coleman was a longtime member of the congregation. The dedication began with speakers extolling Coleman as a good friend and driving force for civil and human rights, recounting personal interactions and Coleman’s unrelenting and dominating presence wherever she went. Coleman died in January.

Alston bellowed that the name of the street aptly described Coleman’s purpose and direction, saying who she was and how she served was clearly “Carolyn Coleman’s Way.” He said her portrait will be placed in a highly visible location in the Guilford County Court House, likely in the Commissioner’s conference room. The Court House’s Blue Room is named for Coleman.

Following the formal ceremony, Hightower led the group a few hundred yards to the corner of MLK Drive and what was Bragg Street adjacent to New Zion, where the councilmember and other dignitaries cut a symbolic green ribbon and unveiled the street sign.

A native of Savannah, Georgia and a graduate of Savannah State College, Coleman was very active in the sit-ins during the 1960’s Civil Rights Movement. She became the first African American woman to serve as chairperson of the Guilford County Board of Commissioners (2005). Previously, she served as a special assistant to former N.C. Governor James B. Hunt, advising on policy, personnel, and issues pertinent to the people of North Carolina.

Coleman’s work for the NAACP included positions in local, state and national governance, including secretary to the national board of directors, vice president of N.C. State Conference and Greensboro Branch.