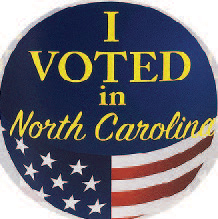 The N.C. Democratic Party has new top leadership and its former state Rep. Bobbie Richardson of Franklin County. She is the first Black woman ever to hold that post. Richardson certainly has her work cut out for her, given that the 2022 midterm elections are right around the corner. Due to the mixed results for Democrats in the November 2020 statewide general election, observers say mistakes made then cannot be repeated now.

Even though Black voter turnout actually went up four percent in the November election from the 2016 election, voting by Black youth ages 18-25 was nowhere as dramatic. According to William Munn, a senior policy analyst with the Health Advocacy Project at the North Carolina Justice Center, “In an election that a lot of people billed as a transformational one — and one where we broke all types of turnout (records) — it is up everywhere. But in terms of African American voters who are younger, it’s just a significant drop off.”

In fact, according to Munn, there has been a 12-point drop-off since 2012. Part of the reason is the failure of evidence for Black young people that voting actually helps to change their immediate circumstances and increases opportunities for them. Another reason for deceased voting participation is simply not feeling part of the political process.

Couple that with the fact that the Democrats Get-Out-the-Vote (GOTV) efforts, particularly in rural areas of North Carolina, were woefully weak compared to the Republican Party, which maintained control of the N.C. General Assembly, and won several top judicial seats on the state Supreme and Appellate courts.

In fact, there are rural areas of the state, like Lumberton County, where Blacks no longer vote Democrat, but now Republican. They have become more conservative in their views and values.

So, what can be done to better mobilize the Black vote in North Carolina for 2022 and beyond?

The coronavirus pandemic hindered much of the Democratic GOTV efforts for 2020, resulting in Republicans being able to deliver more of their voters to the polls by Election Day. Voter registration was also hindered.

Observers say while the states are different, lessons can be learned from Georgia, and the massive success community leaders there like Stacey Abrams had in consolidating and mobilizing the Black vote to elect the first African American and Jewish U.S. Senators in the state’s history last January.

First lesson – Legally challenge any barriers to voting the state puts up that constitutionally cripples the right to vote. Stacey Abrams was able to file suit and win a federal consent decree that eliminated such barriers the state of Georgia implemented to suppress the Black vote.

Second lesson – Make sure that as many people who can register to vote, are.

Thousands of people who had been previously purged from the voting rolls were re-registered, in addition to those who had not been registered before.

Third lesson – Build close relationships with voters in communities, talk with them about their hopes, dreams and policy concerns. Make sure they know that they are being listened to. Hire people within communities to do the work and connect with others when needed.

Other factors certainly lend towards what more can be done to improve Black voter turnout numbers for the 2022 midterm elections. But with Democrats holding a majority in the U.S. Senate by a razor’s edge, and by virtually a few in the U.S. House, Democrats cannot afford to wait for the pandemic to totally blow over.

They will have to do the things they failed to do during the 2020 election, starting now.

Cash Michaels is a journalist covering state news with the Carolina Peacemaker. He is based in Cary, N.C.