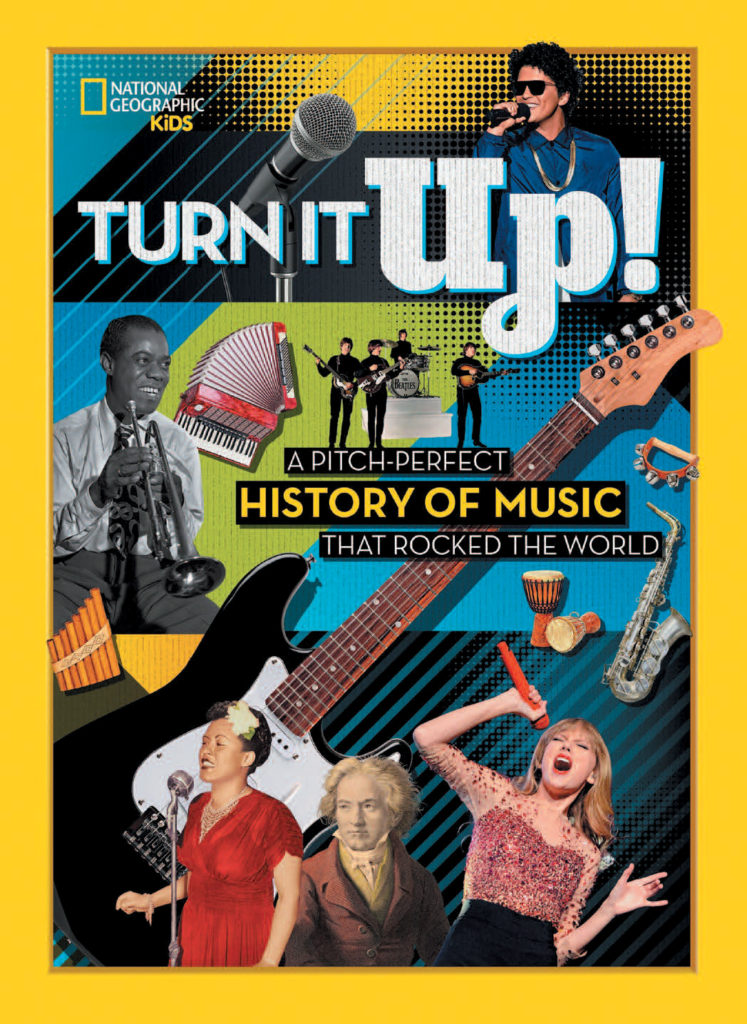 It starts with tapping toes.

It’s followed by shaking shoulders, waving arms, and swaying hips: you hear music and pretty soon, you’re dancing to a beat, and maybe even singing along with an artist you really love to listen to. Can you imagine your great-grandma dancing? Or her grandma? In “Turn It Up!” by Joel Levy, you’ll learn that that’s the way it starts!
Quick: what’s your favorite song?

Of course, you know all the words to that song and you know who sang it, but did you know that the human voice was “the first musical instrument”? Yep, humans sang long before they made music with instruments. Scientists think the first playable instrument was probably a flute made some 40,000 years ago of animal bones, and other instruments followed suit as humans evolved and learned.

And boy, did we learn: early philosophers even figured out that music was a sort of math.

Levy says that the first music was probably meant for worship but over time, it became more. Melodies and harmonies were added. New instruments were invented, making unique kinds of sounds. Musicians passed down notes, then they began to write them down.

In about the mid-1700s, European musicians began organizing into orchestras, complete with instruments of all sorts. Orchestras could play music that was simple or complicated, which really depended on what the composer wrote; the most famous composers became the Taylor Swifts of their time. A hundred years later, bands also became wildly popular.

Through the decades, distinctive styles of music meant different things to different people. Former slaves had spirituals to unite them. Japanese theater-goers had kabuki, which was a kind of drama. African Americans in the early 1920s brought ragtime and the blues to the musical table, World War II Americans loved Big Band, and rock & roll came about in the latter half of the last century. Then – as it is now – songs and instruments could signify one’s culture and one’s favorites, and it was fun to share.

Almost the second your preteen walks into the house, the music begins. He lives for his earpods. She can’t be without her tunes app. So, the next obvious thing to do is to give them “Turn It Up!”

Starting with a basic overview of tunes in antiquity, author Joel Levy explains how music came to be, a story that’s layered like a good concert with history as rhythm, instruments as melody, and singers to carry the book’s tune. It’s a catchy one, at that: children who play will learn more about their instrument and the music it was originally meant for, while those who like to sing will be challenged by the “Listen Up” sidebars that suggest songs that kids might want to hear online.

For 9-to-12-year-olds, this book is nicely rounded, historically interesting, and includes tons of pictures to hold their attention. Don’t be surprised, either, if you borrow it back to read yourself because “Turn It Up!” is something music lovers of all ages will enjoy tapping into.