Book Review: Taking the Arrow Out of the Heart 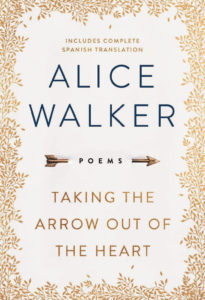 “Think bigger than you ever have,” writes Alice Walker in her newest collection of poetry, “that blackness is not where whiteness wanders off to die, but that it is like the dark matter between stars and galaxies in the universe that ultimately holds it all together.”

Paying tribute to such greats as Mohammad Ali and BB King, Taking the Arrow Out of the Heart also elegantly considers such weighty topics as cruelty and torture by the Saudi Arabian government, social justice in Zapata, Mexico, the utter futileness of war, the U.S.’s military adventurism – and the suffering it creates, especially for the ‘unimaginably poor’, for children, and so many countries of people of color.

Walker, through these poems, also reflects on suffering and what it means to be happy (especially through a Buddhist perspective), basic decency and human goodness, and healthcare as a human right.

These poems cry out for police accountability and criminal justice reform. Some mourn the deaths of particular poets, such as when Walker writes, “when a poet is dying, all the trees droop their branches, not drop them, but let them hang like empty sleeves.”

Concerning grieving, the Pulitzer Prize-winning author pens: “It does not matter to me: wherever you are grieving, whether Paris, Damascus, Morocco, Jerusalem, Bamako, Mexico, Beirut, or New York City, my heart, too, is bruised and dragging. We mourn the loss of goodness that was so divinely ordinary.”

Many of the poems are about mindful meditation, minimalist in nature, quite beautifully inspired by the study and experience of Taoism, the ancient philosophical Asian practice. And through it all, Walker never loses her sense of humor.

Referring to matters of immigration and refugees, she posits, “They would not be running to us if we were not chasing them with the guns and bombs and rockets we sold to crazy people.”

In the piece ‘The World Rising,’ writes Walker, “The world rising can put an end to anything: the murder of children, whales, elephants, forests, oceans.” The literary giant calls for a ‘compassionate rolling over’ – “to start again beaming like the sun, fresh.” The time for politeness vis-à-vis repairing the Earth is over. Such “roll” is needed deep within any parts of ourselves which remain asleep and unaware.

“It is my well-being of your country, so far away,” pens the poet, in ‘Especially To the Toddlers of Iran,’ “I may only have been there in my dreams, that lets me sleep at night.” “I myself do not believe in political parties comprised, generally, of so many who are not awake,” Walker’s poem ‘The Circle,’ suggests, “Let there be a private counsel first with one’s own heart…like a wise grandparent who loves us more than life itself, The Circle sends us out into the world, in the direction we chose, fortified by its collective wisdom and ancestor-driven love.” Amen to that.

Rather like the decades-old bumper sticker: ‘If you’re not upset, then you haven’t been paying attention,’ Alice Walker, for one, has certainly been paying attention-–for decades. And reporting back to us, humanity, on that which she observes, is an exciting circumstance, giving birth to this recommended new collection of poems.

Jonah Meyer is a Greensboro native, a freelance writer and editor.