Book Review: Rise Up: Confronting a Country at the Crossroads 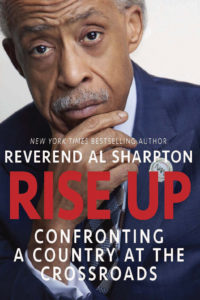 Tired, ready to rest, just plain done. So much racism, so many politicians doing so many things. You’re wiped, laid low with no more go, and you’re not sure you have the energy for more of this. But there’s hope for the hopeless, a lift for the fallen, and in “Rise Up” by Reverend Al Sharpton, there’s reason to keep on.

We are being tested.

It’s happening now, Sharpton says, in a way that we’ve never seen. We’re poked by haters every day, prodded by evildoers. The nation is at a “crossroads” and work is being done to “make America great” but not for everybody. This has to change.

Democracy, says Sharpton, is not perfect but it really is the best of all political practices. To make it work now, we need and “deserve” strong leadership that isn’t racist or homophobic, misogynistic, or against immigration or voter’s rights. It’s what we must have to preserve democracy – and yet, he says, in the last four years, we’ve gone from a transformational leader who embraced diversity to one that’s transactional, and does not. The former allowed a cultural shift that many in the Black community enjoyed. With the latter, we seem to have backtracked.

That came as no surprise to Sharpton: he’s known Donald Trump for decades, has met with him numerous times on various projects. He knows him as just a guy from Queens, a deal-maker, just another politician Sharpton’s acquainted with. He’s known a lot of politicians: King, Obama, Mandela, Clinton. Shirley Chisolm, whom he sweetly calls “Mrs. C.” He’s known celebrities, too: James Brown was like a father to Sharpton. Aretha Franklin was a friend.

Moving forward, he says, we must ask White allies to step aside and make room for Black leaders in issues where Black lives are most affected. Black activists shouldn’t ignore the fight for LGBTQ rights because they, too, are human rights – as are issues of climate change. And as for staying “woke,” remember that waking up means getting up, too…
Let’s start here: Reverend Al Sharpton doesn’t have very much good to say about Donald Trump. If you’re familiar with Sharpton, you already knew this was coming – but “Rise Up” offers some background that happened between the two, and they’re great stories.

That’s a lot of what you’ll get inside this book, in fact: stories, and they mix in with Sharpton’s observations and thoughts so well that it’s easy to be lulled into the telling. No worries: like any good preacher does, he happily yanks your attention back to the pulpit, to racism, voter’s rights, and politics. True to what you’d expect, Sharpton isn’t shy, and he’ll make readers who are Black, White, and Brown think, hard, about today’s issues.

Don’t be surprised to see a somewhat gentler version of Reverend Sharpton in this book – gentler, but no less fierce. Don’t be surprised if this book sparks conversation and action. Now go: you’ve got time, read it before the election, and “Rise Up” won’t let you down.