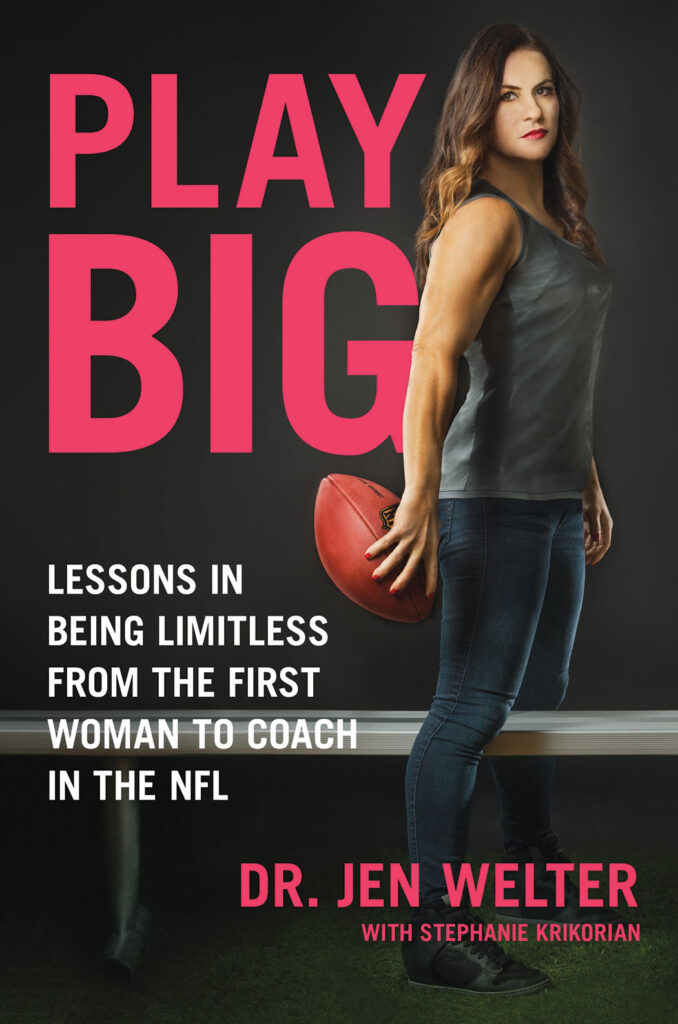 That was the lousiest call, ever.

Obviously, the ref wasn’t paying attention. He was looking the other way, he dropped the flag by accident, he must be wearing a blindfold. The ref was wrong, but in the new book “Play Big” by Dr. Jen Welter (with Stephanie Krikorian), the game is right.

At first, it was tennis.

When little Jen Welter’s mother suggested that her daughters pick just one after-school activity, Welter chose tennis and became obsessed with it. She practiced non-stop and ultimately beat players much older than she, but a coach’s dismissive words caused her to give up the game.

Rugby stole her heart in college and that led to a try-out for the Massachusetts Mutiny, a women’s pro football team. Though Welter was “small,” she used it to her advantage; once on the team, she knew football was her destiny.

It wasn’t going to make her rich, though: she was paid a dollar a game her first season, though the situation got better after she gained a championship ring for the “women’s football Super Bowl” and she moved to Dallas to play with the Diamonds. Later, she played in the IFAF Women’s World Championship. She’d already received her second Team USA gold medal when she made history by joining the Texas Revolution, an Indoor Football League team, for training camp. When the next life-changing phone call came shortly thereafter, Welter again made history with the Arizona Diamondbacks by becoming the NFL’s first female coach.

That, her doctorate degree in psychology, and two other college degrees have given Welter a unique viewpoint on leadership …

Always be authentic, she says; “Heart can’t be quantified.” Don’t rush to commit to your dream, if the timing isn’t exactly right. Look for a mentor and be one. Don’t “confuse money with security, and comfort with progress.” Cultivate a feel for when it’s risk-taking time. Know the character of the people in your life. And finally, harness “the power of teamwork.” Together, your team can do great things.

In many ways, “Play Big” is a book looking for its niche.

Is it a biography? Yes, mostly. Is it a sports book? Absolutely, it is. Is it a business book? That, too, and while it may seem like a mish-mash of subjects, it works here. Author and speaker Dr. Jen Welter (with Stephanie Krikorian) rolls multiple expertises into a narrative that can tiresomely brag but, moreover, entertains and instructs in a tone that pulls rather than pushes. In her book, Welter wrestles with that style of leadership now and then, but she explains how it works for her. It works for readers, too, as she speaks to businesspeople and their teams, both on and off the field, and to women, with a personal story that’s timely and powerfully unforgettable.

Overall, this book is a nice surprise and will appeal to readers of several genres, including those who have no interest whatsoever in football. If you’re looking for something that enhances your life and career, “Play Big” is a good call.

For football fans, there’s more: look for “My First Coach” by Gary Myers, a book by NFL quarterbacks, about the inspiration they’ve gotten from their Dads. Hint: makes a great gift for your Dear Old Pops.