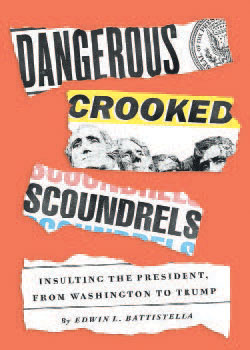 You’ve got a few things to say about that guy in the White House.

If not now, well, you’ve said a few things about other guys in the White House over the years – much of it civil, but some of it was inappropriate for polite society. And in “Dangerous Crooked Scoundrels” by Edwin L. Battistella, you’re in good company.

Was there ever a time when people didn’t verbally poke one another?

Probably not, says Battistella, in times past, insulting was a combat sport of lips and minds, like a Greek-and-Roman “Yo Mama” war of words. With that history of zingers and arrows in mind, it’s no surprise that American Presidents have heard their share.

Insults, says Battistella, take many forms but for all of them, disrespect and demeaning are key. In politics, especially, neutral words can take on a tone of deep insult, some names practically scream to be zinged, flaws (real or perceived) could be highlighted, and insulters should get bonus points for alliteration. Old language can also resurface as a brand-new burn, when words just come back around to insult anew.

Sticks, stones, and snowflakes aside, then, does an insult matter?

Though he was really quite popular, for example, George Washington took his share of insults, and he took them to heart. Abraham Lincoln, beloved now, was called an “imbecile” in his day. Alice Roosevelt Longworth had very little good to say about her cousin-in-law, Franklin. Harry Truman was infamously rankled by an insult to his daughter; JFK and Bill Clinton were both called “spoiled”; several post-World-War-II presidents have been verbally compared to Hitler; Margaret Thatcher had a uniquely-British opinion about Ronald Reagan, and what was said about Richard Nixon, well, let’s just say that it’s in this book…

In this time of partisan politics and divisiveness, you’ve probably said some things. You probably have some opinions. A few of them may be rather peppery, so what you need is a little sprinkle of “Dangerous Crooked Scoundrels.”

And that’s about what you’ll get: a small but nicely-balanced, nonpartisan selection of 45-plus brief, quick-to-read entries and accompanying sidebars that are gently humorous, historical, and – most surprisingly – not entirely focused on politics. Nope, author Edwin L. Battistella writes just as much about the language we use when we create insults as he does about the targets of those japes; here, you’ll learn about the different kinds of insults and how delivery is important. Battistella then goes on to include a glossary of common terms and a how-to for insults which (who knew?) actually have structure and meaning that an English teacher would be proud of.