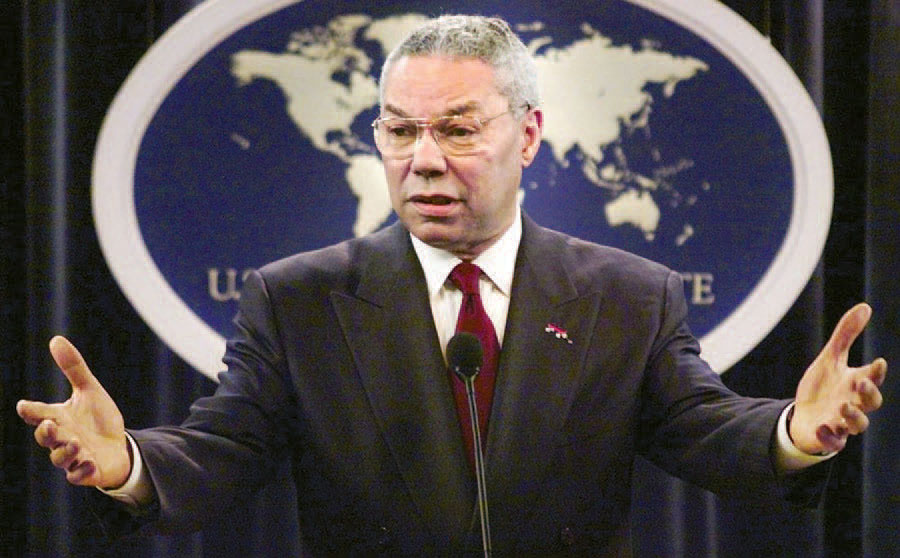 The first Black American ever to serve as U.S. secretary of State, Colin Powell, 84, was lauded by other Black political pioneers for his leadership after his untimely death was announced Monday.

Vice President Kamala Harris, the first African American ever to hold the office, said in a statement:

Secretary Colin Powell dedicated his life defending our nation. As National Security Adviser, Chairman of the Joint Chiefs of Staff, and Secretary of State, he was an independent thinker and a barrier breaker who inspired leaders in our military and throughout our nation.

Secretary Powell served our nation with courage, unwavering in his belief in its principles and its promise. The son of immigrants, Secretary Powell rose through the ranks of the United States Army. He was a decorated veteran and devoted patriot.

The legacy that he leaves behind – on America’s national security and on the leaders he mentored – can be seen every day across our nation and the world.

Years ago, when he was asked to reflect on his own life, General Colin Powell described himself as “first and foremost a problem-solver.” It was true, of course. But he was far more than that.

General Powell was an exemplary soldier and an exemplary patriot. He was at the center of some of the most consequential events of our lifetimes – serving two decorated tours in Vietnam; guiding U.S. strategy in the Gulf War; serving as National Security Advisor, chairman of the Joint Chiefs of Staff, and Secretary of State; offering counsel to four presidents; and helping shape American foreign policy for decades. Everyone who worked with General Powell appreciated his clarity of thought, insistence on seeing all sides, and ability to execute. And although he’d be the first to acknowledge that he didn’t get every call right, his actions reflected what he believed was best for America and the people he served.

Along the way, General Powell helped a generation of young people set their sights higher. He never denied the role that race played in his own life and in our society more broadly. But he also refused to accept that race would limit his dreams, and through his steady and principled leadership, helped pave the way for so many who would follow. It was the way Colin Powell saw the world – not as a starry-eyed idealist, but as someone with deep and abiding faith in this country and what it stands for – that made him such a central figure.

Also on Monday, from the current U.S. Secretary of Defense Lloyd J. Austin III, the first African American in American history to hold that post:

I was informed earlier of the loss of Colin Powell and I want to express my deepest condolences to Alma, his wife, his son Michael, and the entire Powell family.

The world lost one of the greatest leaders that we have ever witnessed. Alma lost a great husband and the family lost a tremendous father. And I lost a tremendous personal friend and mentor. He has been my mentor for a number of years. He always made time for me and I could always go to him with tough issues. He always had great counsel.

We will certainly miss him. I feel as if I have a hole in my heart, just learning of this recently.

My thoughts and prayers go out to the family and we are deeply, deeply saddened to learn of this.

According to Wikipedia, “Colin Luther Powell (April 1937 to October 2021) was an American politician, diplomat, statesman, and four-star general who served as the 65th U.S. Secretary of State from 2001 to 2005 and the first African American to do so. Prior to the election of Barack Obama, as president in 2008, Powell and his successor, Condoleezza Rice were the highest-ranking African Americans in federal executive branch history (by virtue of the Secretary of State standing fourth in the presidential line of succession. He served as the 16th U.S. National Security Advisor from 1987 to 1989 and as the 12th Chairman of the Joint Chiefs of Staff from 1989 to 1993.”