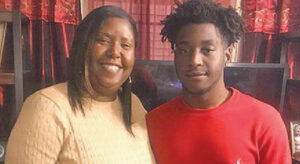 Monica Shepard and her son Dameon were allegedly terrorized at their Pender County home by a former New Hanover County Sheriff’s deputy, his father and others. The deputy and father are now countersuing the Shepard family.

WILMINGTON – The White former New Hanover County Sheriff’s deputy who allegedly led an armed White “mob” to a Black Pender County family’s home in May 2020 has now filed a countersuit, along with his father, against that family, charging that they “…were exploited by greedy lawyers who preyed on racial sensitivities and falsified a story just to seek fame and fortune by committing racial extortion.”

Jordan Kita, the ex-deputy who lost his job because of the incident but escaped conviction when the case went to criminal court, has denied, through his attorneys, that race was a motivation in the May 2020 late night incident.

His lawyer, Woody White, demands that the Black family – Monica Shepard and her teenage son, Dameon – apologize to Kita and his father, or else face a defamation lawsuit.
The Shepards refused, feeling that they were the ones who had been originally violated.

But in their countersuit, Jordan Kita and his father, Timothy, deny that they led an armed angry “White mob” to the Shepard’s home, saying that they and a group of “concerned citizens,” with assistance from the Pender County Sheriff’s Office, were looking for Timothy Kita’s adopted “mixed race” daughter, who “ran away from home” earlier that day.

In fact, despite Jordan Kita’s appearance at the Shepards’ front door wearing his then New Hanover County Sheriff’s deputy uniform – complete with visible holstered service weapon – and another of the accompanying searchers, Austin Wood, carrying a visible “firearm on his shoulder” or “some type of rifle” in front of the Shepard’s property, in their countersuit, the Kita’s admit that their group that night was “… involved in a desperate search,” that caused the Kitas and their search party “…to be under duress and the condition of their minds was one of stress and anxiety…solely motivated by their desire to find [the missing child]…”

The Kitas assert that their conduct that evening “would not have resulted in any injury to any ordinary person,” despite later admitting in being involved in a “desperate search,” that caused the Kitas and their search party “…to be under duress and the condition of their minds was one of stress and anxiety…solely motivated by their desire to find [the missing child]…”
According to press accounts, the Kita search party late night “conduct” at the Shepard’s home was loud enough to wake the neighbors, who promptly called the Pender County Sheriff’s Dept.
The Kitas maintain that they were at the Shepard’s house “a very short time.”

They also deny being part of an “armed mob,” and “…assert that there was implied permission for persons to approach [the Shepard’s] home, and [they] posted no sign or notice forbidding entry to [their] property” warning of trespassing.

Legally, trespassing is invoked once a property owner demands that you leave immediately and you don’t, which the Shepards allege happened after 10 p.m. on that Sunday night, May 3rd, 2020.
Interestingly, the Kitas admit that Dameon Shepard was “shouting” at them, yet they deny any “confrontation” with the Shepards several times in their countersuit, saying only that they had a “short conversation” with Monica Shepard before leaving to continue their search.

Denying any “confrontation” with Dameon Shepard, the first to answer the door, is critical to the Kita’s countersuit, for it was his loud demands for Jordan Kita to get his foot out of the front door and go away that awakened his mother, Monica, and drew her to the disturbance at her home.

The Kitas maintain that all of their actions that evening were without racial malice or threat, even though they also admit to looking for a Black teenager named “Josiyah” who they were erroneously told was harboring their young missing family member at the Shepard’s Avendale neighborhood address, and whom they also erroneously accused Dameon Shepard of being initially upon arriving at the Shepard’s home, according to the Shepard’s lawsuit.

In their countersuit, the Kitas claim to not know the race of “Josiyah,” even though Dameon Shepard claims Jordan Kita immediately accused him of being Josiyah upon answering the door.
In fact, the Kitas’ countersuit says very little about ever speaking to Dameon Shepard at all, even though he was the first to answer the door upon the Kita “search group” arriving, and the first to insist that Jordan Kita allegedly stop trying to put his foot in the door as he demanded answers.

The Kitas claim that attorneys for the Shepards and the media are using race as an aggravating factor because of the “political climate.”

As a result, the Kitas claim defamation, and seek damages and punitive damages of at least $25,000, and a trial by jury.