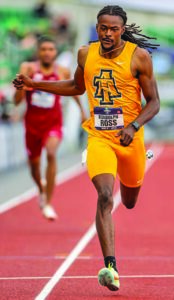 CHARLOTTE – North Carolina A&T freshman Grace Nwokocha (Port Harcourt, Nigeria) and Aggies’ junior Randolph Ross Jr. (Raleigh, N.C.) have been voted the 2021-22 Big South Conference Women’s and Men’s Track Athletes of the Year, respectively, while High Point sophomore Sydney Horn (Lancaster, Pa.) and North Carolina A&T senior Brandon Hicklin (Inman, S.C.) have been selected the league’s 2021-22 Field Athletes of the Year, it was announced by the conference office. The awards are voted on by the Big South head track & field coaches as part of their annual June meeting, and encompass both the indoor track & field and outdoor track & field seasons.

Nwokocha claimed two First-Team All-America honors in outdoor track & field as she finished sixth in both the 100m (11.21) and 200m (22.52) at the NCAA Championships. She established Big South records in both events during the NCAA Semifinals, as she first ran a 10.97 in the 100m – the first sub-11.00 time in league history – followed by a 22.44 in the 200. Nwokocha was the Most Outstanding Performer of the 2022 Big South Women’s Outdoor Track & Field Championships as her then-record 22.75 in the 200m ranked ninth nationally at the time. She won the 100/200 double at the conference championship with times of 11.13 in the 100 and 22.75 in the 200. Nwokocha qualified for the National Meet in Eugene with a third-place finish in the 100m (11.17) and fourth-place standing in the 200m (22.45) at the NCAA East Preliminary. During the indoor season, Nwokocha earned All-Conference honors in the 60m dash with a third-place finish (7.42), while her season-best 60m time of 7.36 at the Tiger Paw Invite in February ranks third all-time in league history. She also ranks fifth all-time on the Big South’s indoor performance list in the 200m with a time of 23.72, which was set at the Carolina Indoor Open. Nwochoka received three Freshman of the Week accolades this past year – two outdoor honors and one indoor plaudit.

Ross was a two-time National Champion and five-time All-American in 2021-22. He won both the Indoor and Outdoor 400m, and also earned First-Team All-America honors in the outdoor 4×100 and 4×400, along with Second-Team honors in the indoor 4×400. Ross won the NCAA outdoor 400m in a Big South-record time of 44.13, and was the Big South champion in the event with a then-record time of 44.61. He was part of the top two outdoor 4x100m relay times in league annals – including the record of 38.61 set at the Tom Jones Memorial in April, as well as the top four 4x400m relay times in conference history – including the all-time mark of 3:01.59 established at the NCAA East Preliminaries in May. Ross earned three All-Conference honors during the Big South Outdoor Track & Field Championships (200, 400, 4×100), as his second-place finish in the 200m featured the second-fastest time in league history at 20.26. In addition, his then-record time of 44.61 in the 400m at the conference meet was best in the nation, which earned him the Big South’s Most Outstanding Performer Award. Ross, who has been a Bowerman Award Watch List candidate all season, is the first back-to-back NCAA champion in the outdoor 400m since 2010 and 2011. He won the NCAA indoor 400m in 44.62 seconds – the third-fastest time in world history and third time this season that he posted the fastest time globally. Ross was honored as the USTFCCCA’s Southeast Region Men’s Track Athlete of the Year for both indoor and outdoor, and was a two-time Big South Indoor Track Athlete of the Week honoree.

Horn captured First-Team All-America honors in the pole vault in both the indoor and outdoor season for the second consecutive year. The 2020-21 Big South Women’s Field Athlete of the Year, she first finished as the National Runner-up at the 2022 NCAA Indoor Track & Field Championships with a Big South and school-record height of 4.46m. Prior to the national meet, Horn won the Big South indoor pole vault with a championship meet record clearance of 4.42m. Horn’s sophomore season culminated with a sixth-place finish in the outdoor pole vault earlier this month in Eugene with a clearance of 4.35m, surpassing her height of 4.30m at last year’s NCAAs. She won the NCAA East Preliminary with a vault of 4.31m to qualify for nationals, and was the Big South champion in the event with her 4.34m effort. Horn broke her own outdoor conference record in the pole vault this season with a 4.45m clearance at the VertKlasse Meeting in April, and was named Big South Field Athlete of the Week four times this past year (three indoor, one outdoor).

Hicklin finished fifth in the long jump at the NCAA Outdoor Track & Field Championships with a distance of 7.86m for First-Team All-America distinction. His Big South-record jump of 8.18m (26-feet, 10-inches) at the Aggie Classic in April was tops in the nation and qualified him for the NCAA East Preliminary. Hicklin secured his spot in the national meet with a jump of 7.80m and fourth-place finish. He also won the Big South outdoor long jump title with a Vert Stadium-record performance of 7.60m. During the indoor season, Hicklin established the conference’s all-time best in the long jump with a 7.85m effort at the Clemson Invite in January. He took home Second-Team All-America honors in the NCAA indoor long jump with a leap of 7.39m, which was good for ninth-place.

Finalists for the Big South’s annual Track & Field awards were: