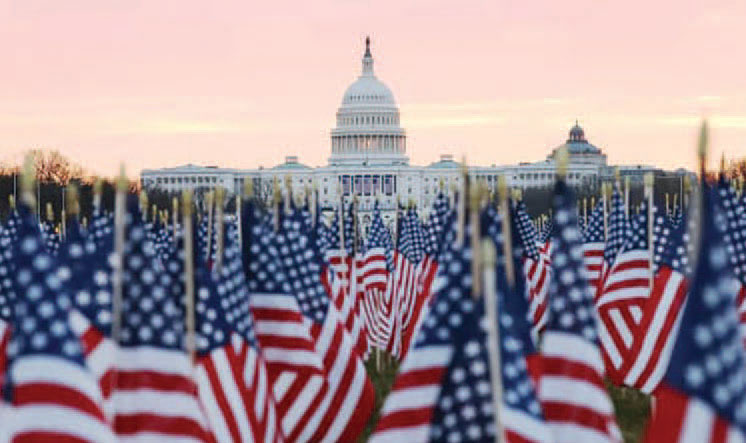 The U.S. Capitol Building, pre-inauguration. Two weeks ago, domestic terrorists failed in an attempt to seize the Capitol and harm government officials who were carrying out the duties of ceremonially counting Electoral College votes. Five people died, including a Capitol Police Officer, due to injuries sustained during the attempted seditious insurrection. Getty Images.

January 20, 2021 was a cold and overcast Inauguration Day in Washington D.C., until the sun popped out just before Biden’s swearing-in.

The crowd in a city that has been locked down because of the dual threats of the coronavirus pandemic and the potential for domestic terrorism was smaller than usual and socially distanced.
Those in attendance included past presidents, Barack Obama, George W. Bush and Bill Clinton, as well as their respective First Ladies, Michelle Obama, Laura Bush and Hillary Clinton. This is the first inauguration missed by Jimmy Carter, now age 96, and his wife Rosalynn, since attending their own on Jan 20, 1977. Also, notably absent from the inauguration was Former President Donald J. Trump, who chose to fly to Florida earlier that morning rather than attend.

As is the custom, most of Congress and the Supreme Court were in attendance including Vice President Mike Pence.

The proceedings began with an invocation by the Rev. Leo J. O’Donovan, a Jesuit priest and former president of Georgetown University who is a close friend of the Biden family. Then, Lady Gaga sang the National Anthem followed by Andrea Hall, who recited the Pledge of Allegiance while she used sign language. Hall was the first African American female firefighter to become captain of the Fire Rescue Department in South Fulton, Georgia.

Harris is the first woman, the first Black American and the first South Asian American Vice President of the United States. She is a Howard University graduate, where she became a member of Alpha Kappa Alpha Sorority, Incorporated, the oldest African America sorority in the United States. Harris is also a graduate of The University of California, Hastings College of Law. She was sworn in by Justice Sonia Sotomayor, the first Latina member of the U.S. Supreme Court. Sotomayor also administered the oath to Biden as vice president in 2013.

Harris was sworn in on two Bibles — one that belonged to a close family friend named Regina Shelton and another that belonged to Thurgood Marshall. Marshall, the country’s first African American Supreme Court justice, has long been a hero to Harris.

Harris’s swearing-in was followed by Jennifer Lopez who sang a combination of, “This Land is Your Land” and “America the Beautiful.”

As is tradition, the Supreme Court’s chief justice, John Roberts, administered the oath of office to Joe Biden. Biden took the oath with his hand on top of his 127-year-old, 5-inch-thick family Bible, which was held by his wife, Dr. Jill Biden.

The theme of Biden’s acceptance speech was a united America and he opened his remarks with the note that this is America’s day, this is democracy’s day.

Throughout his speech Biden emphasized the need for unity. He said America was tested and it has risen to the challenge. He added democracy is precious, democracy is fragile but democracy has prevailed.

Hammering home the idea of unity, Biden said we need to set our sights on an American story that depends not on any one of us but on all of us “we the people who seek a more perfect union.” He added that through storm and strife we have come so far but we still have so far to go. He noted that the election of the fist woman and first Black person as vice president shows we as a nation can change.

“With unity we can do great things, important things.” Biden kept focused on his theme of unity adding that Americans need to see each other not as adversaries but as neighbors, without unity there is no peace only bitterness.

In an unnamed reference to former President Trump, Biden added, that we must reject a culture when facts are manipulated and manufactured. He concluded by emphasizing, “I will be a president for all Americans and will fight as hard for those who did not support me as those that did.”

Garth Brooks followed the swearing in with a singing of Amazing Grace. Brooks was followed by Amanda Gorman, who became the country’s first Youth Poet Laureate, in 2017. She read a poem she had written for the occasion called “The Hill We Climb.”

The traditional luncheon that follows the inaugural ceremony and the inaugural balls were both canceled due to COVID-19 precautions. The inaugural committee is holding three “virtual” balls next Tuesday night, which will feature remarks from Harris.

After the review, Biden, Harris and their spouses went to Arlington National Cemetery in Virginia, where they laid a wreath at the Tomb of the Unknown Soldier. The Obamas, the Bushes and the Clintons also attended the wreath laying ceremony.

After the wreath ceremony, the Bidens, Harris and Harris’ husband, Doug Emhoff, (who has chosen the title for his new role to be, Second Gentleman) went to the White House for the first time as president, first lady, vice president and second gentleman. The presidential escort to the White House included drumlines from the University of Delaware and Howard University — Biden’s and Harris’ alma maters. The caravan kicked-off the virtual “Parade Across America” at 3:15 p.m., featuring performances from all 56 states and territories.