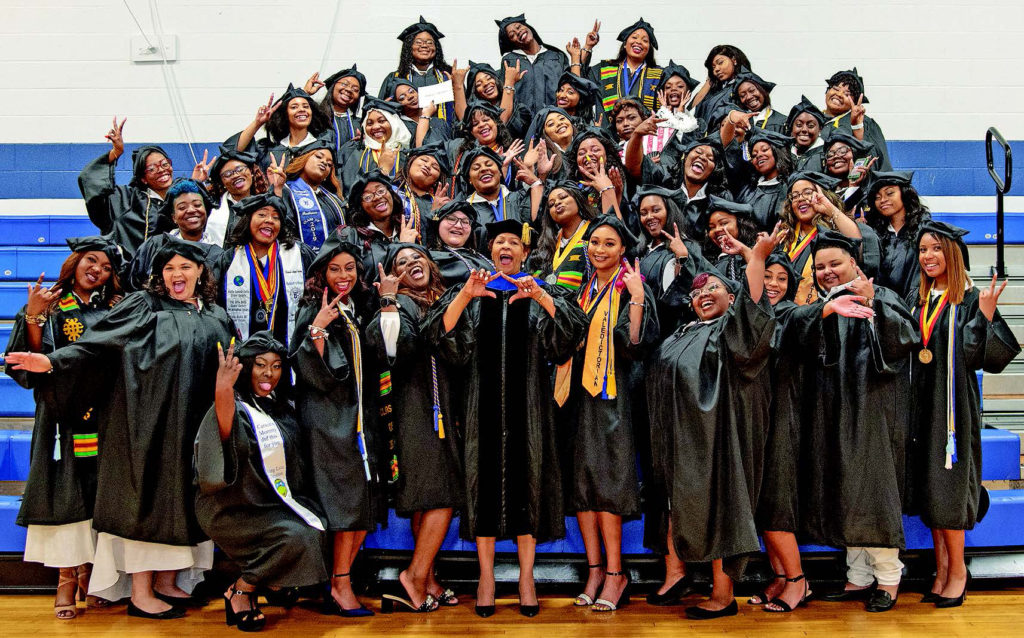 Fifty-two Belles were conferred degrees in front of a host of family and friends on the campus Quadrangle at Bennett College’s spring 2019 Commencement exercises on Saturday, May 4.

Senior Class President Tyler Binion, who earned a Bachelor of Science degree in Business Administration on Saturday, revved up her classmates and told them during her Valedictorian address to continue to encourage themselves on the journey ahead.

“My sisters, as we go on to the next phases in our lives, please don’t forget to pour into you and continue to remind yourself of who you are. Continue to understand your purpose,” she said.

The commencement speech was delivered by Kwanza Jones, co-founder and CEO of the Kwanza Jones & José E. Feliciano SUPERCHARGED Initiative. SUPERCHARGED is a personal development platform that combines fitness, confidence, and community initiatives to help people achieve the best quality of life.

Jones and her husband, José E. Feliciano, donated $1 million to the #StandWithBennett Campaign earlier this year.

“You all took the need of being heard, a moment in time, and turned it into a movement that garnered far more than you were trying to achieve. That’s what happens when we work together,” said Jones, applauding the work the students did to push the campaign.

Not a graduate of Bennett herself, Jones has strong familial ties to the college. Her mother, Dorothy Wilkerson Jones, is a 1965 Bennett alumna, and her aunt, Brenda Wilkerson Hoover, is a 1963 graduate, as well as numerous other extended family attended and graduated from Bennett College. Jones holds a BA in Public and International Affairs from Princeton University and a Juris Doctorate from the Benjamin N. Cardozo School at Law of Yeshiva University in New York City.

Dubbing the graduates ‘Queen Belles,’ Jones advised them to wear their crowns proudly.

“As Bennett Belles, you are queens, royalty, Bennett has prepared you all to go out into the world,” said Jones.

Bennett honored Jones’ donation by renaming sections of the campus’ Holgate Library for her, her mother and aunt.

“Education is such a powerful tool for success,” said Jones. “There are no short-cuts in life.”

She also expressed the importance of supporting each other as well as their alma mater. After giving her remarks, Jones gifted each graduate with a custom-designed handbag engraved with the words, “Queen Moves Only,” with each bag containing a $500 gift card, saying to them,

“Invest in yourselves. Queens uplift other queens and invest in one another. Don’t ever let anyone diminish your shine.”

Jones was also presented with artwork from the students at the Martin Dixon Intergenerational Center and awarded an honorary Doctorate of Humane Letters.

The Bennett College Board of Trustees Teaching Excellence Award was bestowed upon Dr. Willeta Gibson, an associate professor of Biology and project director of the Louis Stokes Alliance of Minority Participation at Bennett College. President Dr. Phyllis Worthy Dawkins presented the 2019 President’s Outstanding Service Award to Board of Trustees member, Kimberly Ripberger.

Board of Trustees members Andrea Harris ’70, Carolynn Johnson, and Susie Johnson were each recognized with Bennett College’s Distinguished Service Award.

This year’s honored class was the class of 1969.

Graduates gathered at the Annie Merner Pfeiffer Chapel the night before on May 3 to hear words from Rev. Dr. Howard-John Wesley, pastor of Alfred Street Baptist Church in Alexandria, Va., who served as Bennett College’s 2019 Baccalaureate speaker.

“You are uniquely positioned to change the world,” said Wesley, telling the grads to not let fear stop the strength they have within them.

A supporter of HBCUs, Alfred Street Baptist Church also donated $50,000 to the #StandWithBennett campaign this year. Wesley acknowledged the college’s long-standing spot in the fight for civil rights, social justice and equality, and the more than 7,000 women it has graduated in its 146 year history.

“This is why the legacy of Bennett College must remain open, why its’ doors must never close, why the accreditation shouldn’t be challenged, because we will act a fool on them because we stand with Bennett College,” he said to a round of applause.

Wesley was also gifted artwork from the students at the Martin Dixon Intergenerational Center.

Also during the Baccalaureate ceremony, High Point University (HPU) President Dr. Nido Qubein was bestowed an Honorary Doctorate of Humane Letters. On February 1, under Qubein’s leadership, HPU donated $1 million to Bennett’s fundraising campaign. A few days later on Feb. 4, Qubein attended a press conference at Bennett and gave the college another $357,000 in checks from HPU students, various boards and organizations with which he is affiliated.