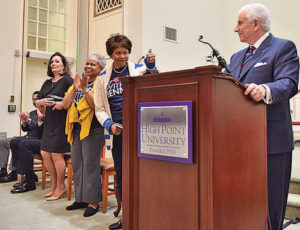 On the fundraising deadline of February 1, Nido Qubein, president of neighboring High Point University, (HPU) pledged up to $1 million to Bennett as a challenge grant.

Founder of global lifestyle brand, SUPERCHARGED, Kwanza Jones, along with her husband José E. Feliciano, co-founder and Managing Partner of Clearlake Capital Group, L.P., a leading private investment firm in California, announced a $1 million gift to the college on Monday.

“My mother and aunt were trailblazers who came from a family that valued education as a worthwhile pursuit in and of itself,” said Jones. “Bennett College was a transformative place for them and, in turn, for our family. This gift is meant to help ensure that young women of color, today and in the future, have a chance to blaze their own trails and experience the beauty, brilliance and boldness that Bennett College brings forth.”
The #StandWithBennett Campaign also included an aggressive social media campaign that gained support from across the country, and the attention of celebrities, such as TV actor Jussie Smollett (Jamal Lyon, Empire).

On December 14, 2018, Bennett leaders began reaching out to the public to help raise $5 million in order to reach financial stability under the Southern Association of Colleges and Schools Commission on Colleges (SACSCOC) guidelines, the regional accreditor which monitors, evaluates, and accredits education institutions across the country.

SACS placed the college on probation for financial reasons in 2016 and does not allow for an academic institution to be on probation longer than two years. Although the college saw a rise in enrollment and a surplus of dollars at the end of the fiscal year 2017-18, it wasn’t sufficient enough to satisfy SACS guidelines. On December 11, 2018, the college was removed from membership from SACS and faced losing accreditation, which Bennett leaders quickly appealed.

The college remains accredited during the appeal process and college leaders have made sure to emphasize that they were removed strictly for financial reasons and not sanctioned for its academics, faculty, leadership or students.

The 146 year-old college, established under the United Methodist Church, is one of only two all-women’s historically Black colleges in the country.
Now that the money has been raised, the next step is the formal appeal to SACS to keep Bennett College’s accreditation on Feb. 18 in Atlanta. Bennett administrators will be notified of the accreditation board’s decision on Feb. 25.