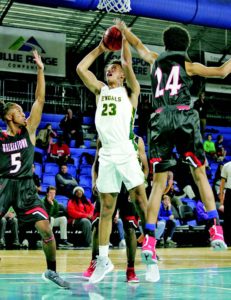 Mike Fowler (#23), a senior forward, scored 10 points in the Bengals’ 77-51 victory over the Walkertown Wolfpack. Photo by Joe Daniels/Carolina Peacemaker

The Greensboro Coliseum Fieldhouse served as the site for the 2019 North Carolina Scholastic Basketball Classic on Saturday, Jan. 12.

Game one featured the Greenfield Knights (16-4) vs. the Northwest Guilford Vikings (11-2). The Knights jumped out to an early lead and never trailed in the game. The Bengals dominated the boards on both ends of the floor and led 41-23 by the half. Early in the third quarter, Greenfield led 51-33 before the Vikings closed to within seven, 57-64, with 1:57 remaining. Junior guard Christian Hampton led Northwest with 23 points while Dean Reiber and Johnny Pagano each netted 13 points.

In the nightcap, the Greensboro Day School Bengals (GDS) cruised past the Walkertown Wolfpack by a score of 77-51. Greensboro Day improved to 17-5 while the Wolfpack dropped to 9-5.
Sophomore guard Carson McCorkle paced the Bengals with 16 points. Teammates Nicholas Evtimov scored 14 points while Banks Handy added 12 points. Jalen Cone led the Wolfpack with a game-high 28 points.

“It’s nice to see the ball go in the basket for us. When we shoot the ball well, we’re good enough on defense to make it an interesting game against anybody.” said GDS head coach Freddie Johnson.