Being the first is a solemn responsibility. 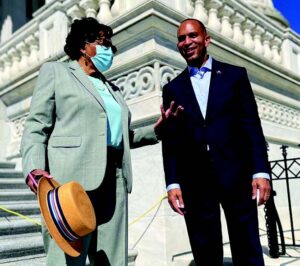 When you’re the first woman, first African American, or the first of any group in a prestigious role, you feel the weight of generations on your shoulders. Black women doubly so.

People pin their hopes on you. They look to you for guidance and strength. They hold it against you when you fail.

You also have a responsibility to pave the way for others. Thanks to pioneering Congresswomen like Jeannette Rankin, Patsy Mink, and Shirley Chisholm, I was the 100th woman in Congress – not the first.

Last week, another Member of Congress celebrated being the first – my friend, Representative Hakeem Jeffries, officially became the first African American leader of a party in Congress early Saturday morning after it took 15 roll call votes to choose a Speaker of the House.

Leader Jeffries takes over the Democratic caucus at a pivotal moment. MAGA Republicans have pulled the Republican Party to the far-right, and some members of the House who assisted the January 6th insurrection were involved in the effort to prevent Republican leader Kevin McCarthy from becoming Speaker of the House.

With this newfound power, the far-right Republican conference is advancing legislation that will appeal to Trump Republicans and the MAGA mindset but has no chance of receiving more than 49 votes in the Senate. For example, this week’s bills included government welfare for millionaire and billionaire tax cheats, anti-abortion legislation that will harm parents and exacerbate the Black maternal health crisis, economic bills supported by racist and xenophobic rhetoric, and more.

This has the potential to be a disaster for Black America. Luckily, we have the right leader for this moment.

As he demonstrated with his passionate introductory speech, Leader Jeffries is focused not on fighting one another, but on the ABCs of governing.

“American values over autocracy. Benevolence over bigotry. The Constitution over the cult,” he said.

Leader Jeffries knows this moment is about keeping our democracy strong. As Donald Trump’s January 6th insurrection showed, there are Americans who are content to bend the rules of our Democracy until it breaks.

The MAGA Republicans are experts at this. They changed the House rules so any one member of their conference can call for a vote of no confidence in the Speaker at any time. That means that if the Republican leadership tries to compromise with Democrats on any issue, the far-right can hold the Speakership hostage.

Most Americans know it would be a disaster for us to default on the national debt or weaken Social Security, Medicare, and Medicaid. The White supremacist far-right, however, will cling to power by any means necessary to accomplish their agenda, even if it means burning everything down.

Finally, let’s not forget Brother Hakeem had another honor that week as the first Black American ever nominated for Speaker of the House – and the first to get the most votes in an election for Speaker.

Since the House roll call is in alphabetical order, I was proud to be the first to vote for him. If House Republicans continue on this path, I’ll lead a Democratic majority in voting for Speaker Jeffries in two years.

It’s only going to take us one vote.