Bears restore Tarik Cohen back to his original role 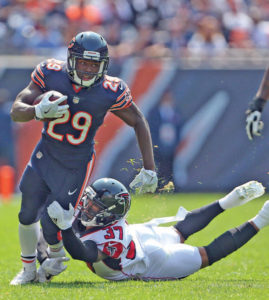 Tarik Cohen, a Chicago Bears running back and A&T alumnus heads to the end zone against the Atlanta Falcons.

The Bears have a restoration project going on in their backfield in addition to the conversion project they have undertaken with Cordarrelle Patterson.

Tarik Cohen last week got his contract extension worth $17.25 million over three years, and they’re trying to get their money’s worth out of him with a restoration to his old usage.
He’s a back who caught a lot of passes, turned into a receiver who ran sometimes and now a back again who can catch passes.

“I think there’s probably more of an emphasis in balancing how many touches he gets as a running back, and on top of that, I really feel like he’s taken the challenge that we’ve given him as a coaching staff to become a more well-rounded back,” Bears coach Matt Nagy said. “So far I like the way that he’s handled that.”

It was against the Atlanta Falcons in 2017 when Cohen made his Bears debut at Soldier Field with a lean-back touchdown and some shifty open-field running.

Cohen has 12 rushing attempts for 53 yards this season but has been targeted only three times for 21 yards in the passing game.

In Cohen’s rookie year, he had 87 runs, 71 targets and 53 catches. It went to almost 50-50 in 2018 with 99 runs and 91 targets but last year had gone all the way to 64 runs and 104 targets.
“We felt like last year, we used him a lot more quote unquote as a wide receiver, in that position, and teams see it that way,” Nagy said. “It’s important that the things that he can do as a back, you use him the right way in regards to whether it’s out of the backfield, getting mismatches on linebackers and safeties. But if you’re going to do that, you have to be able to make sure that he has touches in the run game as well.”

It’s meant carrying the ball more inside than last year or even when Nagy took over in 2018. Cohen then had plenty of outside runs in his 99 rushes. As a result, the 5-foot-6, 190-pound Cohen knows what’s important.

“My biggest love is definitely the offensive line,” he said. “I feel like they’re getting down, nitty and gritty. You love to see that from your O-linemen.

“The same thing I love about this year is the commitment to (running).”

The play calling is also aiding him if it is an inside run, as Cohen noted when he said “…we’re calling runs on maybe second-and-long, maybe third-and-intermediate. We’re calling those run plays and we’re picking it up. So that’s a wonderful compliment (paid) to the O-line and definitely it shows how much hard work we put into it this off season.”

It would have been simple for Cohen to be disgusted about being a receiver more last year than a back, and to go to another team in free agency next year.

When the Bears converted Patterson to running back from receiver, Cohen especially could have been irritated because it seemed to take away what few chances to run that were available to him.
He stayed open-minded, and he liked the idea of staying in Chicago to work out a deal.

“For the most part, it was like the Bears offered me a good deal, and the history that I have with the team and just the family-like bond that I feel not only with the players but the ownership and the coaching,” Cohen said. “I felt like it was only right for me to stay here.

“They gave me my first shot and I feel like I’m always loyal to the people who are loyal to me.”

It’s not the first time he had a chance to leave somewhere but chose to be loyal. The other came at North Carolina A&T.

“The bigger schools weren’t looking at me when I was coming out of high school, so I should just stay with my family.”

Now it’s all about family with the bigger contract for Cohen. He said the first thing he’ll do with his cash is buy his mother a new home, after getting through his non-contentious negotiation with an agreement signed almost at midnight on the eve of the game with the Giants.

“As far as within this year right now, I feel like contract extensions are based on what they think you’re going to do in the future and what you have done for the team in the past,” Cohen said.