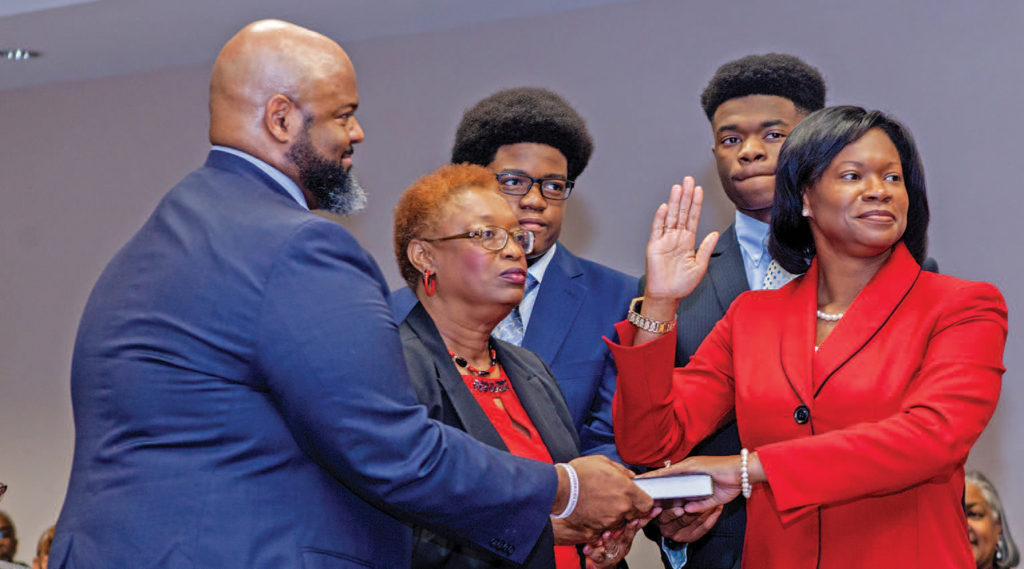 Avery Crump (right) takes her oath of office to be the Guilford County District Attorney as her husband, Jason, and family members stand by her side. Photo by Ivan S. Cutler/ Carolina Peacemaker

The historic swearing-in ceremony took place on Wednesday, January 2 at the Guilford County Courthouse in Greensboro.

“This is a personal honor and privilege for me,” said Judge Susan Bray, “Avery was one of the best district attorneys I’ve ever worked with. While we were colleagues in district court, I found Judge Crump to be a hard worker and willing to share an ever burgeoning caseload.”

Crump’s husband, Assistant Capital Defender, Jason Crump Sr., introduced Crump saying, “Today is a very auspicious occasion. I stood in front of a courtroom on numerous occasions and never have I been so nervous as I am today. This is an historic moment.”

A graduate of Statesville (N.C.) Senior High School, Crump went on to obtain a Bachelor of Arts in Political Science from UNC Chapel Hill and a law degree from N.C. Central University School of Law.

Pastor Cory A. Graves, White Oak Grove Missionary Baptist Church, Crump’s pastor opened the ceremony with a prayer, before she was administered the oath of office.

Crump replaces former District Attorney Doug Henderson, who retired in 2018 after serving in the position since 2005. Crump defeated her opponent, Stephanie Reese in the Democratic primary on May 1, 2018 with 53.56 percent of the vote. She subsequently won the seat as she faced no Republican opposition in the November General Election.

“Thank you to the citizens of Guilford County, thank you for putting me in this position to make some great chances in mind. I do not take that lightly. I guarantee you that I will work and work and work,” said Crump.

Staying true to her campaign platform, Crump noted that while in office she intends to continue working on improving the county’s juvenile justice program, work to find solutions to the effects of the opioid crisis on the judicial system and implement a driver’s license restoration program.

“Seeking justice is not just about prosecution, it’s about doing what’s right. That is my vision and that’s what this office will be doing,” said Crump.