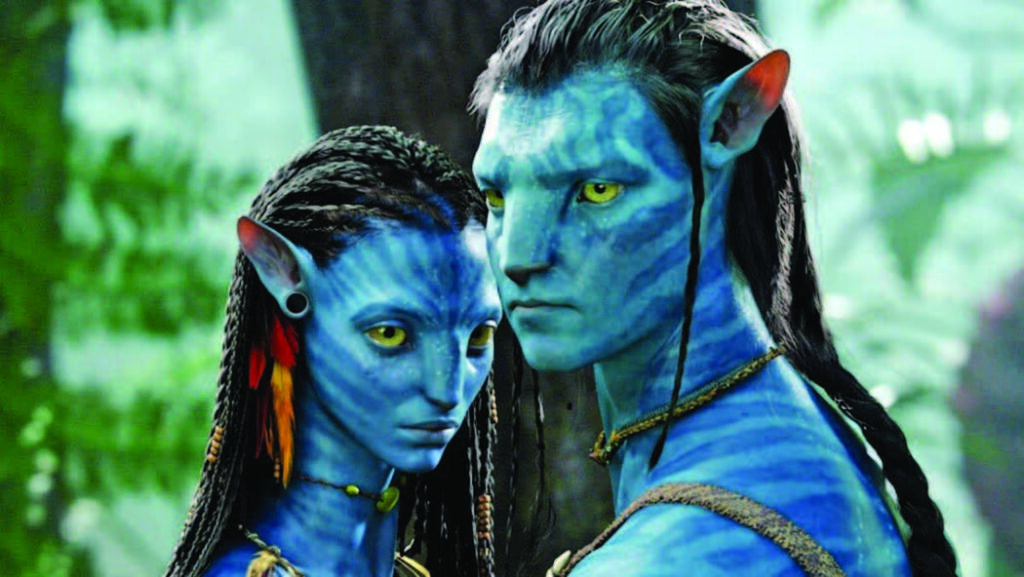 Zoe Saldaña, as Neytiri and Sam Worthington as Jake Sully star in Avatar.

It’s more than you can possibly imagine. A fantasy world so vivid and real it commands your full attention for 3h 12m. And when it’s done, you’ll still want to linger in this heightened state of make believe.

You’d think after creating The Terminator, Aliens, Titanic and the ground-breaking Avatar that writer/director James Cameron had put all his creative cards on the table. But no, he’s just getting started. He’s so juiced up, he’s concocted premises and storylines for Avatar 3, 4, and 5. For now, he’s completed the sequel, Avatar: The Way of Water, the most visually astounding film of the year.

Credit Cameron, his cowriting team (Rick Jaffa and Amanda Silver) and fellow producers for thinking out of the box in the most technologically advanced and spiritual ways. But the real showstoppers are a complex stereoscopic 3D multi-camera system (cinematographer Russell Carpenter), an AI process that captures actors’ movements, applies algorithms and then the layers of animation that bring the 3D-CG characters to life. 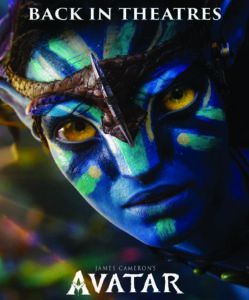 A fantasy world so vivid and real it commands one’s full attention for 3h 12m.

A crack visual effects team (Joe Letteri and Richard Baneham) expands an audiences’ conceptions of what tech wizardry can be. Evocative production design creates a netherworld, (Dylan Cole and Ben Procter), wondrous colors dazzle (art directors Robert Bavin and crew) and exotic costumes mesmerize (Deborah L.Scott). The stunning visuals mean you’ll have to pry your eyeballs off the screen before leaving the theater.

Jake Sully (Sam Worthington), an ex-Marine and paraplegic, morphed into an ultra-tall blue skin being, a Na’vi. He is now the head of the Omatikaya clan on the moon Pandora. He’s coupled with Neytiri (Zoe Saldaña), and they parent their kids, Neteyam (Jamie Flatters), Lo’ak (Britain Dalton), Tuk (Trinity Jo-Li Bliss) and their adopted teenage daughter, Kiri (Sigourney Weaver) who feels out of place: “Why am I different?”

All is well until human invaders, “The Sky People,” led by the monstrous Recom Col. Miles Quaritch (Stephen Lang), target him and his moon’s resources. Miles heads an elite team of soldiers who’ve been resurrected as recombinants (recoms). This menacing force infiltrates Pandora, threatens and chases Sully’s family and forces them to flee. Sully: “I just want to keep my family safe.” The Sullys seek refuge in the ocean-bound territories of the Metkayina clan. As they navigate the ways of the water, their presence arouses their new hosts’ suspicions. Danger shadows them.

The very engaging plotline, with preserve-the-planet themes and dotted with the Sullys’ perils, is never less than compelling and easy enough to follow, even with its plethora of characters and odd animals. If you miss a detail, it doesn’t matter, you’ll get the gist. The only story device that becomes a nuisance is the children’s odd propensity to ignore their parent’s warnings and get themselves in trouble. It’s an overused ploy that makes you wish the writers had found other ways to put the family in jeopardy so someone could ride to an exhilarating rescue.

The adventure never stops. It’s measured out rhythmically, rarely giving your heart beat a chance to slow down. The colors, creatures, settings, costumes, props, weapons and fights bombard you. During interludes, the family’s bonding with plants and animals becomes as amazing as the hardcore action scenes. That combination of kinetic energy and transcendental moments makes this film soar.

You want the Sullys to find peace. You fully understand that any bliss may come at a price for them and their protectors. Minutes then hours roll by, and when the film ends you only wish for more. That you could binge-watch Avatar for an entire weekend. And with the future arrivals of chapters 3, 4 and 5, that will be a welcomed reality in years to come.

Hard to fathom what the cast did to make their characters’ movements so fluid. Filming under water brought them grace, but even their land scenes make them look like dancer/warriors. All, including Kate Winslet and Cliff Curtis (Once Were Warriors) as the heads of the Metkayinas, are incredible. However, Saldaña’s very primal interpretation of a mother/warrior is a standout performance from a group of actors who swing for the rafters with every emotion … fear, anger, jealousy, love, sadness, grief, relief, triumph…

Cameron and his team have taken the art of film and fantasy to a new level. Nothing you’ve screened previously—not even the first Avatar—can prepare you for the images you will see, journey you’ll take and feelings that will envelope you. It’s the kind of experience that makes young audiences crave repeat viewings. And with no other act/adv/fan films on the horizon, theaters will be packed with Na’vi devotees for months to come.

This precious gem could develop into a $2B goldmine. And that estimate, unlike the film, will be well within everyone’s imagination.