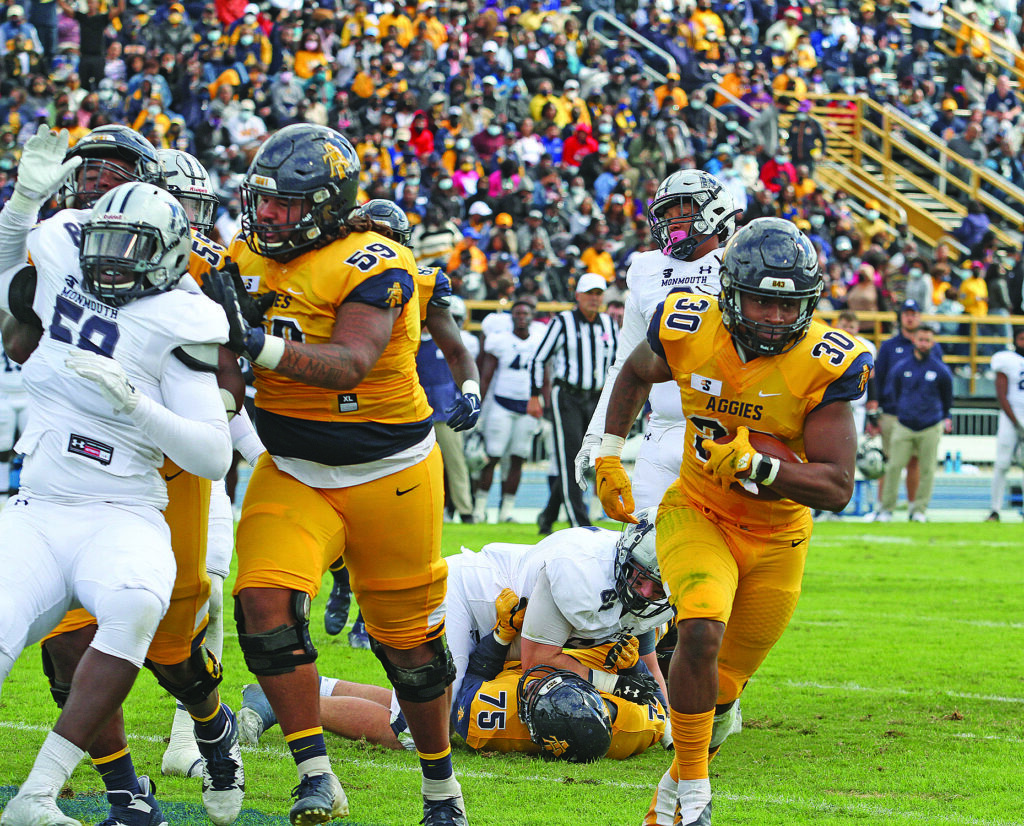 The most disappointing season in Sam Washington’s head coaching career reached another low point last Saturday when his Aggies looked confused and undisciplined to start the game, before suffering yet another second half collapse in their 35-16 Homecoming loss to Monmouth.

Playing in front of a near capacity Homecoming crowd at Truist Stadium, Washington initially hoped the home field advantage would provide a much-needed spark against the Big South Conference-leading Hawks. However, the festive environment surrounding A&T’s Greatest Homecoming On Earth (GHOE), couldn’t supplement the Aggie’s lack of focus on defense nor could it jumpstart a once-dynamic offense that has struggled to find an identity in recent weeks.

A&T trailed 21-7 midway through the second quarter before getting a safety and a four-yard touchdown pass to tight end Nick Dobson to pull within 21-16 at the break. The Aggies had several opportunities to go ahead in the third quarter but were unable to take advantage and were eventually outscored 14-0 in the second half.

The loss dropped A&T’s record to 3-5 overall and 2-3 in the Big South – almost certainly insuring the Aggies of their first postseason absence since 2016.

“We’re not accustomed to being in the position that we’re in right now,” said Washington, who will need to win all three remaining games to avoid the program’s first losing record since 2011. ”It’s difficult for everybody. But it’s very important that we stay together as a team and learn from it. It’s part of the journey and we’ve got to make the most of it.”

On the third play of the game, A&T was forced to call a timeout because several defensive players were not sure where to line up. That proved costly at the end of the first half when the Aggies drove the ball down to the Hawks’ 30-yard line but had no timeouts left and were unable to get a final play off before the clock expired.

It was a perfect illustration of how self-inflicted wounds have come back to haunt the Aggies in key moments.

A&T’s sloppy play in this contest resulted in 12 penalties for 98 yards. It was also the third game in a row that the A&T offense has been held scoreless in the second half.

“I wish I had the answer,” said Washington when asked about his team’s offensive struggles. “If I had the answer to that we would not be having this problem. But it’s something that we’ll continue to work on and we’ll get better at.”

Defensively, the Aggies struggled to keep pace with Monmouth’s up-tempo offense all afternoon and surrendered several big plays in the passing game.

Overall, Monmouth converted eight of 17 third down attempts and were three of four on fourth down.

“Coach Callahan and his staff had their team ready to go and they came in and played like champions,” said Washington afterwards. “There’s a lot to be learned from that ballgame and we look forward to this week’s preparation.”

The Aggies will look to regroup this Saturday when they travel down to Charleston Southern to face the 3-4 Buccaneers at 1 p.m.

Charleston Southern is coming off a 27-14 home win over Campbell and has won two out of their last three games. That includes an impressive 35-5 victory against Hampton, the same Pirate team that routed A&T two weeks ago.

Led by 5’10” senior quarterback Jack Chambers, the Buccaneers currently have the No. 1 ranked passing offense in the Big South, averaging 294.1 yards per game. They also have the No. 2 ranked overall defense in the conference.

Offensively, the Aggies will need to eliminate the drive-killing mistakes that have plagued them in recent weeks and find a way to convert their chances in the red zone.

Against Monmouth, Jalen Fowler had another inconsistent performance, completing 18-of-29 passes for 215 yards, one touchdown and a costly interception in the third quarter that thwarted a scoring opportunity.

Afterwards., Washington announced that Fowler has been dealing with a small fracture on his left non-throwing hand for the last two weeks.

One bright spot for the Aggies was the noticeable improvement of senior running back Jah-Maine Martin who looked a lot more explosive and recorded a game-high 97 yards rushing and one touchdown on 16 carries against Monmouth. His 6.1 yards per carry average was easily his best showing in weeks.

A&T fans will remember Martin’s heroics in the 2019 match-up at Charleston Southern when he exploded for 299 yards and two long touchdown runs to secure a 27-21 victory.

Washington would definitely welcome a repeat of that performance, as his team looks to salvage what’s left of this disappointing 2021 campaign. He’s well aware that many A&T fans share in his frustration over this year’s record, but remains confident better days are not far away.

“Just bear with us,” said Washington. “This has been one of those learning curve years. Several things we have contributed to it – the pandemic, injuries – but I am going to stick with my motto: No excuses, no regrets. Next man up is what’s expected here. We expect the next guy to step in, and we’re not to falter. The level of play shouldn’t alter very much, but it is what it is. It’s one of those learning experiences and part of our journey.”