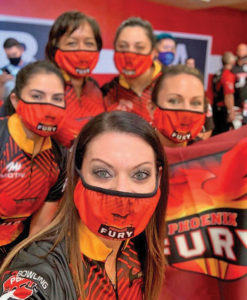 Terrell-Kearney is staying busy. On top of coaching the Aggies and a PBA team, she was named an assistant coach for Team USA earlier this year.

“Seeing a team full of female bowlers compete against the men was super cool,” said Strombeck. “It showed us (as a team) if you can bowl then you can bowl, it doesn’t matter that you’re female.”

Strombeck and her teammates watched the tournament together through instant messaging because they were not together due to the COVID-19 pandemic.

“To even hear the commentators say that coach Kearney’s team should not be underestimated because they’re super talented shows you there is a future for women in bowling. It is no longer just dominated by the men.”

On June 23, the PBA announced two new professional bowling teams that will be comprised of all women. Those teams will join the race for the 2020 PBA League Elias Cup, the association’s top team championship.

“This is an absolutely a privilege to be one of the first female coaches and the first female coach of a female team,” Terrell-Kearney said. “This is a great honor to have the chance to work with the best women in the world. The women get a chance to compete with the men, the best in the world, and see where we stack up. We have five girls that believe that they can win. Our goal is to win.”

The Fury and Miami Waves are the first two teams made up of all women in PBA history that dates back to 2013.

Three women have been on previous team rosters that consisted of mostly men before this season.

The PBA consists of 12 teams split into two divisions. The Fury is in the Carter Division along with Dallas Strikers, Philadelphia Hitmen, Brooklyn Styles, Silver Lake Atom Splitters and Las Vegas High Rollers. On July 7, the Fury and the Waves each drafted five women for the competition.

The top 35 eligible players based on the 2019 Women’s PBA points list were eligible to be drafted.

With the luck of the coin, Terrell-Kearney received the first pick and selected Shannon O’Keefe. Neither Terrell-Kearney nor Waves coach Bob Learn Jr., drafted outside of the top-10.

“There was so much talent,” Terrell-Kearney said of the draft.

“When I was crafting my team and looking at the draft board, there were so many things that we needed to consider.

Some of it was making sure that they would work well together and have they competed against each other collegiately or as Team USA members.”

The five women Terrell-Kearney drafted were all familiar to her. They either bowled against Terrell-Kearney as an opposing coach or when she was an assistant coach for Team USA from 2009-13.

“Four of my players are former Team USA members that have been on the team together in the past,”

Terrell-Kearney said. “Everyone knows each other. That was really kind of having the ability to connect and to compete against each other is a big thing when you are playing against a team.”

Last weekend, Terrell-Kearney and the Fury made PBA League history as the first women’s team to win a match in the league.

“O’Keefe won so many PWBA Tour titles in 2019 (five) that she should probably be named the 2020 PWBA Player of the Year despite the cancellation of the season,” said Clark. “Add all-time legend (and 10-time major champion) Liz Johnson, 2018 PWBA Rookie of the Year Jordan Richard, two multi-time PWBA Tour champions Stefanie Johnson and Maria Jose Rodriguez, and this team could find itself hoisting the Elias Cup in its first season.”

Phoenix entered the tournament as the No. 6 seed in the Carter Division and defeated the third-seed Silver Lake 2-1. The Fury won their first game, 243-214, but lost the second game, 216-212. In the sudden-death roll, Rodriguez secured the win with a strike after the Atom Splitters left a ten pin standing.