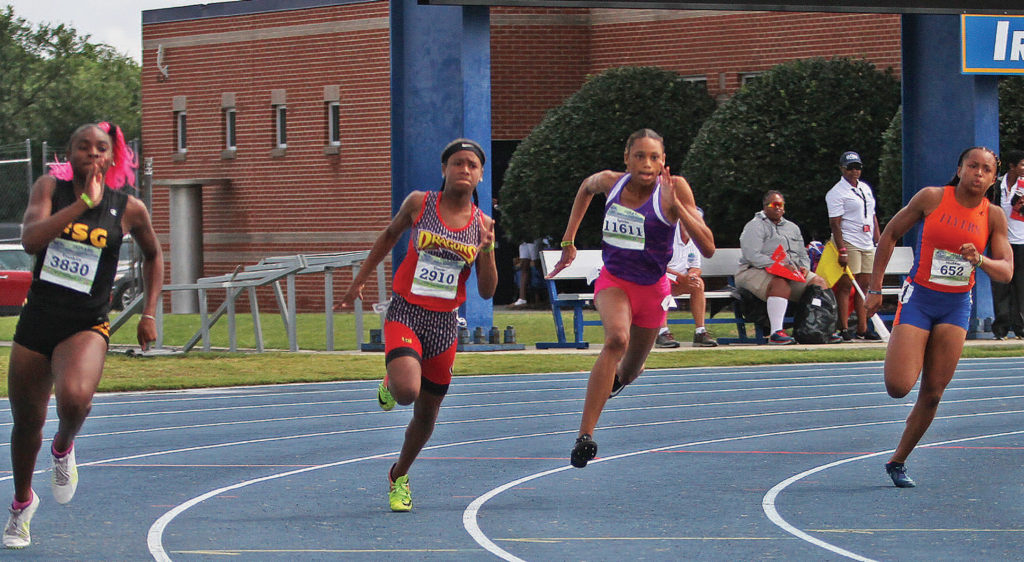 Greensboro’s Tianna Spinks (second from right, #11611), running unattached, finishes fifth in the girls’ 200m (12 yo division) with a clocking of 25.54 seconds. Photo by Joe Daniels/Carolina Peacemaker

On the third lap of his 3,000 meter final on Saturday, Noah Haileab of Pearland, TX. turned to fellow competitor Maddon Muhammad of Charlotte and made a bold proclamation.

Let’s go get this record.

“We just went for that record pace time,” Muhammad said.

Going for the national record wasn’t originally part of Muhammad’s or Haileab’s race plan, but they decided that they may as well give it a shot.
The two high school runners ran stride-for-stride as fans cheered them on, but it was Muhammad, who had more left in the tank over the final meters to take the 15-16 year old division on the eighth and final day of competition at the AAU Junior Olympic Games.

And after crossing the finish line, the two couldn’t help but celebrate the competitive race. Muhammad and Haileab embraced out on the track, and then Haileab even did a little shimmy by the water tent in the infield.

It was an entertaining race that Muhammad, running for the Charlotte Panthers, came away from feeling proud.

“Initially not going for [the record], I’m really proud of myself for pushing myself to a limit that I didn’t think that I could,” Muhammad said. “It just made me satisfied with the race I had.”

In a close competition, Ja’Myah Williams of Eagles Wings Track and Field Club from Baton Rouge, La., came out on top with a throw of 104-5. Williams fouled on three of her six throws, but that was all she needed to win the event. Averie Barefield of Sho Up & Sho Out finished slightly behind Williams with a mark of 103-7, and Rodz Throw Crew’s Janey Campbell placed third.’

Boys 15-16yo 4x800m: A stellar 1:53.61 anchor leg by Cyrus Jacobs for Jacobs Sports Academy (Port Arthur, TX.) led to a dominant win in the event with an overall time of 8:03.56. The team’s performance fell a little short of the national record of 7:55.91 set just three years ago. A talented team from Charlotte Panthers earned the slight edge over Xtreme Force Track Club for second place.

It came down to a dip at the line to determine the winner, but it was Elizabeth Deen of the Greensboro Champion that gained the two hundredth of a second advantage over Shakayla Lavender (Virginia Elite Sports) to take the 12yo 80m hurdles win. Deen also captured the long jump title with a jump of 18-feet-05 inches.