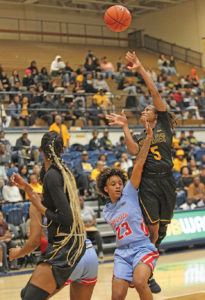 After suffering back to back road losses, the Lady Aggies returned to the friendly confines of Corbett Sports Center to post a hard earned 58-53 MEAC victory over Delaware State.

The Aggies led by 15 points starting the third quarter before the Hornets went on a 14-0 run. It was the Aggies’ (13-6, 5-2 MEAC) ability to knock down open shots in the fourth quarter that kept them in the game.

After two Sharajah Collins free throws gave Delaware State (7-11, 3-2 MEAC) a 39-38 lead with 7:50 remaining in the game, the Aggies tied the game on a Jasmen Walton free throw. Mikaya Wilson hit several big shots in the fourth quarter and got some assistance from senior guard Cinia McCray and junior forward Deja Winters. Wilson tied her career-high with 18 points to go along with six rebounds and four steals.

Jayla Jones-Pack finished with her third double-double of the season with 11 points and 11 rebounds.

Jones-Pack’s 3-point play gave the Aggies the lead back at 46-45 and sparked a 10-0 Aggies’ run that included a Wilson jumper, a McCray 3-pointer and a putback from Jones-Pack that gave the Aggies a 53-45 lead with 2:15 to play. Lyric Turner stopped the run by hitting another three. Seconds later, however, McCray found an open Winters in the corner for a 3-pointer that gave the Aggies a 56-48 lead with 1:40 to play. A 5-0 Del State run highlighted by a Sharajah Collins 3-pointer got the Hornets to within three, 56-53, with 39 seconds to play. But after Walton hit two free throws, the Aggies blocked two Del State shot attempts to close out the game.

The Aggie Women return to action 2 p.m., Saturday, Feb. 1 at Corbett Sports Center against the No. 1 team in the conference, the Norfolk State Spartans (12-7, 6-0 MEAC).