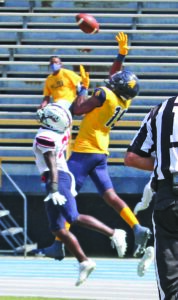 This touchdown throw from A&T QB Jalen Fowler to senior Zachary Leslie in the end zone was just out of reach. Photo by Joe Daniels/Carolina Peacemaker.

A&T’s long-awaited Big South Conference debut on October 2 was a dominant one, fueled by the re-emergence of several veteran playmakers that finally appear to be near full strength.

Senior running back Jah-Maine Martin eclipsed the century mark for the first time this year after suffering a preseason ankle injury, senior defensive end Jermaine McDaniel recorded his first multiple sack performance since returning from a bout with COVID, and senior wideout Zach Leslie showed that he’s fully recovered from a torn Achilles by making a leaping touchdown grab right before halftime, as the Aggies routed visiting Robert Morris 41-14 at Truist Stadium.

It was the first ever Big South conference game for both schools.

“Very excited to win the first ballgame within the Big South Conference,” said fourth year A&T head coach Sam Washington, whose team is now back to .500 with a 2-2 record on the year and who saw his all-time record at home improve to 10-2. “It was a tough ballgame for awhile there. They (RMU) came in, and they were well-prepared. They were focused, and they came in to win, but I think our guys were able to stay focused and humble and stay after it.”

For Martin, this was finally the breakout performance fans had been clamoring for since he was named a preseason All-Conference selection and placed on the Walter Payton Award watch list this summer. After only gaining a combined 87 yards rushing on 35 attempts throughout his first three contests, Martin exploded for a game-high 105 yards rushing against Robert Morris, including two second-half touchdowns that put the game out of reach.

“It was a long time coming and I felt like it was long overdue,” said Martin, who rushed for 1,446 yards and 23 touchdowns in 2019. “Going from having my way on the field to not having my way was a big mental step that I had to take, but I feel like everything happens for a reason and I needed it.”

A&T junior quarterback Jalen Fowler had probably his most consistent performance of the season, completing 15-of-20 passes for 206 yards, two touchdowns and one interception on a tipped pass. He also impacted the game with his legs, finishing as the team’s second leading rushing with 76 yards on seven carries – including a 31-yard scamper on a designed run.

“It makes it very difficult on the defense,” said Washington about Fowler’s emergence as a dual threat weapon. “The quarterback is the one guy that the defense normally doesn’t account for in the run game. I thought we really took advantage of that.”

Offensively, the Aggies racked up 446 yards of total offense, gained 28 first downs, were a perfect 6-for 6 inside the red zone and didn’t have to punt a single time.

Freshman kicker Andrew Brown was a perfect 2-for 2 on field goals, extending his consecutive made streak to six and earning his second straight Big South Special Teams Player of the Week honor.

Also for the second week in a row, A&T used a late score at the end of the first half to stymie an opponent’s comeback attempt.

After Robert Morris narrowed the score to 13-7 thanks to an eight-yard touchdown pass from George Martin to D’Andre Hicks, A&T’s Taymon Cooke returned a short kickoff 35 yards back to the Colonials 45-yard line. Two plays later, Fowler lofted a high-arching spiral in the back of the end zone and Leslie soared effortlessly over the smaller defender to pull in the 22-yard touchdown pass. It was Leslie’s only catch on the day but proved to be an important momentum shift, making the score 20-7 at the break.

“That was huge,” said Washington. “I thought we took “Big Mo” into the locker room because of that.”

The Colonials responded with a seven play, 75-yard touchdown drive on their first possession of the third quarter to pull back within 20-14, but A&T would then clamp down defensively and erupt with 21 unanswered points to seal the victory.

McDaniel led A&T’s Blue Death Defense with his two sacks and five tackles from his defensive end position, causing havoc in the Colonials backfield all afternoon. Surprisingly, he said he felt he was still only operating at about 80 percent after missing the first two games because of COVID. Washington believes that as McDaniels continues to get back in shape the Aggies’ defense will become even more destructive.

The one cause of frustration for Washington was the Aggies’ inability to get off the field on third down. Robert Morris converted 9 out of 14 third down attempts in the contest – helped largely by A&T penalties. The Aggies were penalized six times for 50 yards.

Next up for A&T is another Big South Conference home game, this time against a winless North Alabama Lions squad who Washington calls “the best 0-5 team I’ve ever seen in my life.”

It will be the Aggies first ever meeting against the Lions, who moved up the Division 1- FCS level in 2018, having previously been a Division II power since 1949.

“This should be an exciting contest,” said Washington. “We still have a lot of work to do but we’re definitely headed in the right direction. I feel that if we continue to practice hard and practice correctly, we’ll reach our goals.”