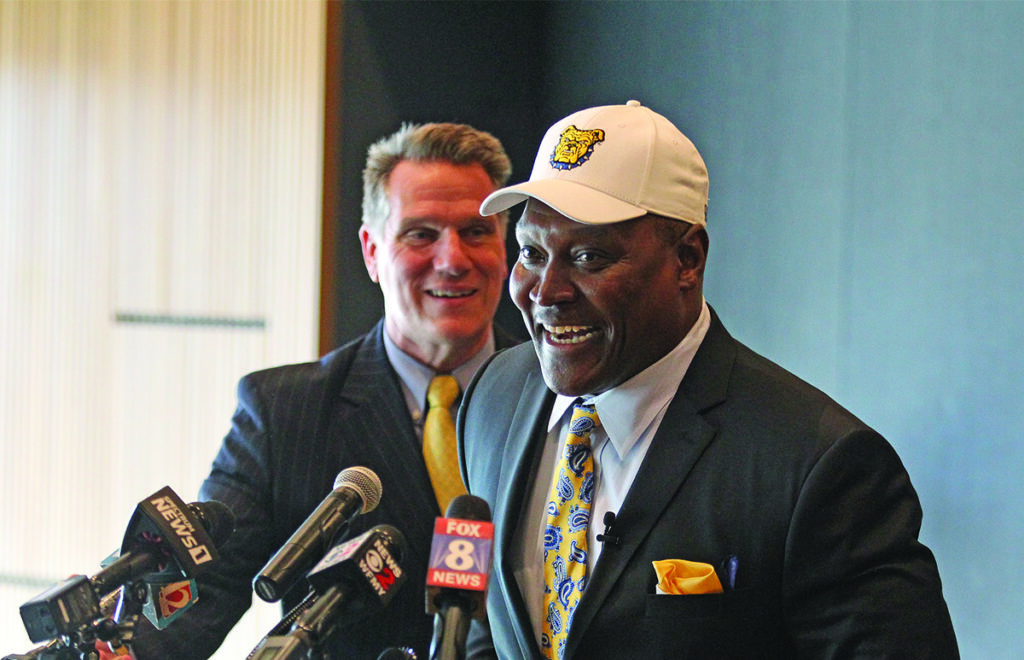 All it took was hearing that roaring battle cry from the tall, stout gentleman standing confidently at the front podium and wearing a white Aggie ballcap, and the folks inside A&T’s Deese Ballroom were immediately sold.

“We want to build a physical and mentally tough team that plays with discipline, purpose, passion … and Aggie Pride!”

And just like that, the Vincent Brown football era at North Carolina A&T State University had officially begun.

During a half-hour long press conference on Monday, January 9, Brown was introduced as the 22nd head football coach in A&T history – ending weeks of speculation and uncertainty about who would replace former A&T coach Sam Washington.

His message was clear. He was coming to Greensboro to bring about change to a football program that is venturing into the uncharted waters of the Colonial Athletic Association next season.

“I will be unwavering in our push towards excellence on and off the field,” said Brown, who added that his program will be built around four central pillars: intellectual, social, physical and skill development. 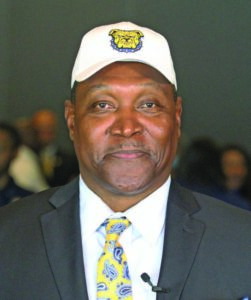 Brown arrives with much fanfare from William & Mary University, where he served as assistant head coach, defensive coordinator and linebackers coach for the past four years. The Tribe finished first in the CAA this past season with a 11-2 overall record and advanced to the quarterfinals of the FCS playoffs.

“The CAA is a tremendous league,” said Brown, who’s defensive unit was ranked among the nation’s top 20 in several categories. “Tremendous coaches and [the schools] allocate significant resources to recruiting very talented players. After having a chance to look at the A&T program and talent level, I believe we’ll have a chance to step into the conference and be extremely competitive. There are a lot of talented players in this program.”

During his 15-year coaching career, Brown has built a solid reputation of being a defensive guru who favors a 3-4 scheme, and also as someone who’s regarded as a true leader of men.

He and his wife, Chandra, have four children: Dane, Vincent II, Raven and Jorian.

Prior to picking up a coach’s whistle, Brown enjoyed a storied career in the NFL as an all-pro linebacker for the New England Patriots, where he was developed by the likes of Bill Parcels.

It was during his collegiate days at Mississippi Valley State where he earned the nickname the Undertaker – a moniker that still follows him to this day.

“A local radio broadcaster when I was in college said that when I tackled people, I buried them into the ground and hence ‘The Undertaker’ stuck,” he said.

Later during the press conference, Brown was flanked on the stage by A&T Chancellor Harold Martin and Director of Athletics Earl Hilton. It may ultimately be the synergy between those three men that will determine if Brown receives the tools he needs to be successful.

Hilton acknowledged that during their contract negotiations he made assurances to Brown that there would be a significant investment in program resources.

“Yes, there have been commitments, assurances made regarding what it will take for us to become competitive – not just in football, but across all of our sports in the CAA. That’s a conversation that began long before this particular interaction occurred. Coach Brown has helped us define what we need to do in terms of Xs and Os and what we do from a facility, equipment and transportation standpoint. We’re going to make some of those changes immediately.”

When asked directly why the university felt the need to part ways with Washington, Hilton declined to get into specifics but did hint that Washington and the administration were not seeing eye to eye on some things.

“Questions about alignment, vision and perspective factored into that decision,” said Hilton.

Towards the end of the event, Chancellor Martin addressed fans’ concerns about the university’s desire to fund a championship-caliber football program.

“The commitments we’ve made to Coach Brown are reflective of our commitments to invest more substantially in athletics,” said Martin. “The challenge I’ve given to Earl … is to advance a master plan that will be very strategic and consistent with our aspirations to be the very best in (athletics).”

Coach Brown and the Aggies will open their 2023 football season at UAB on September 2.