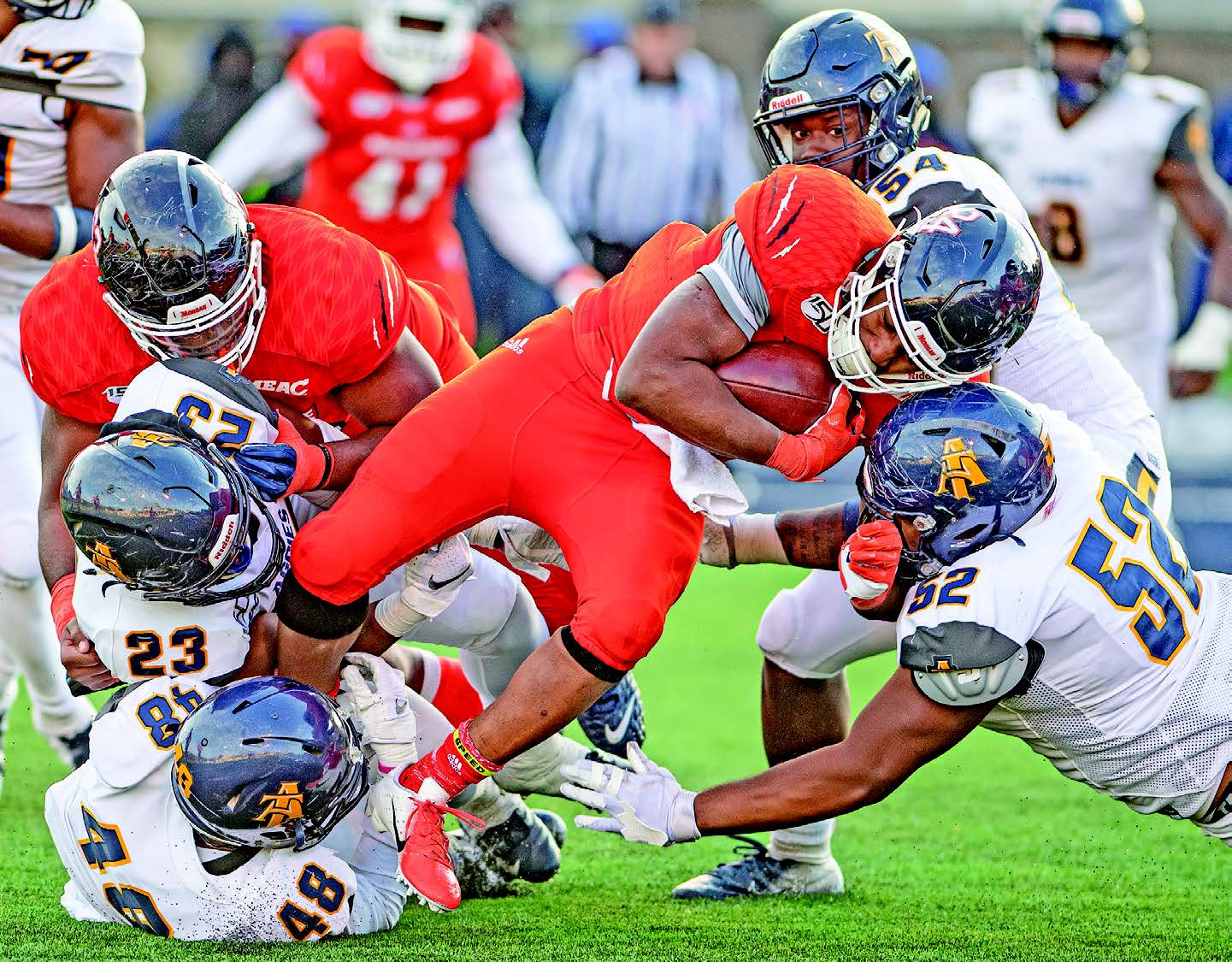 A strange thing happened last weekend during what A&T assumed would be a quiet stroll to an upcoming MEAC title showdown.

Along the way, the Aggies were forced to make a sudden detour to a place called Humility-ville.

For the second year in a row, the Aggies faced a seemingly overmatched, one-win Morgan State team, with their sights set further down the road to a contest with higher stakes.

And for the second year in a row the Aggies were unable to recover from a sluggish start and numerous turnovers, and ultimately suffered an embarrassing defeat. 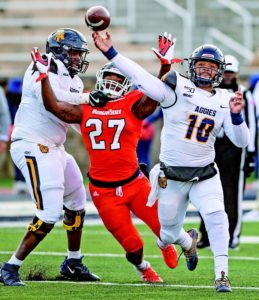 Senior quarterback Kylil Carter was 15-of-38 passing for 154 yards and one score while rushing for 60 yards on 14 attempts for the Aggies. Photo by Erin Mizelle/A&T Sports

Last year it was a 13-16 loss to the Bears on a last second field goal in Greensboro. This time, Morgan State found a way to stymie the Aggies’ high-powered offense and eventually withstood a late comeback attempt for a 22-16 upset at Hughes Stadium in Baltimore.

“We just didn’t play well,” said A&T head coach Sam Washington afterwards. “Everything was all about alignment, assignment and effort and I thought we looked horrible in all three areas. We didn’t get lined up correctly, we made too many penalties and we didn’t get off the field on third down defensively. (Quarterback Kylil Carter) was off his mark. (Running back Jah-Maine Martin) couldn’t get it started. I don’t know. We weren’t very good.”

In what was arguably their sloppiest performance of the season, A&T committed a season-high 13 penalties for 86 yards. Carter looked uncomfortable in the pocket all afternoon, throwing two costly first half interceptions in the redzone and was also sacked twice. He finished with just 154 yards and one touchdown on 15-of-38 passing.

For the second week in a row, Martin was held to under 100 yards rushing – this time earning 80 yards on the ground and 0 touchdowns on 18 carries.

Defensively, A&T held the Bears to just 89 yards rushing, but once again surrendered big plays through the air, allowing Morgan to convert 8-of-14 third down attempts.

“Give their coaching staff a lot of credit,” said Washington. “They found us in certain situations and they exploited it. They did things very well and left us dumbfounded.”

One of the main bright spots for A&T was kicker Noel Ruiz, who was perfect three-for-three on field goal attempts and now leads the nation with 19 made kicks.

The Aggies entered the day tied for first place with Bethune-Cookman, and it appears the Wildcats were also looking past their opponent – losing a stunner to Delaware State, 16-13.
Those improbable outcomes have now caused in a three-way tie atop the MEAC standings with A&T, Bethune and South Carolina all sitting with 4-2 conference records. Florida A&M has been undefeated in MEAC play this year and currently boasts an 8-1 overall record, but is ineligible for the postseason.

Thus, the Aggies’ loss to Morgan State ultimately did little to change their path to Atlanta and the Air Force Reserves Celebration Bowl.

Because A&T won the head-to-head match-up with South Carolina State two weeks ago, the Aggies still own that tiebreaker and control their own destiny. If A&T wins its last two games against Bethune this weekend and archrival North Carolina Central on No. 23, it will clinch its third straight MEAC title.

Kickoff is set for 1 p.m. on Saturday at BB&T Stadium.

“(Bethune) is going to come in hungry and they are going to be mad and they are looking to win a conference championship as well,” said Washington. “So we must match that intensity and I feel very confident that we will.”

Last year, A&T crushed the Wildcats 35-10 in Daytona Beach. In that game, the Aggies racked up 471 yards in total offense, led by Elijah Bell who had five catches for 105 yards and one touchdown, and Martin who had 10 carries for 118 yards on the ground, including a 67-yard touchdown run.

In losing to Delaware State last weekend, the Wildcats fell behind 0-16 and were held to just 257 total yards. Bethune was stopped three times on fourth-downs, including twice in the fourth quarter.

Statistically, Bethune has been a middle-of-the-road team for most of the season, currently ranking sixth in the MEAC in both total offense (321.7 yards per game) and total defense (394.9 yard per game).