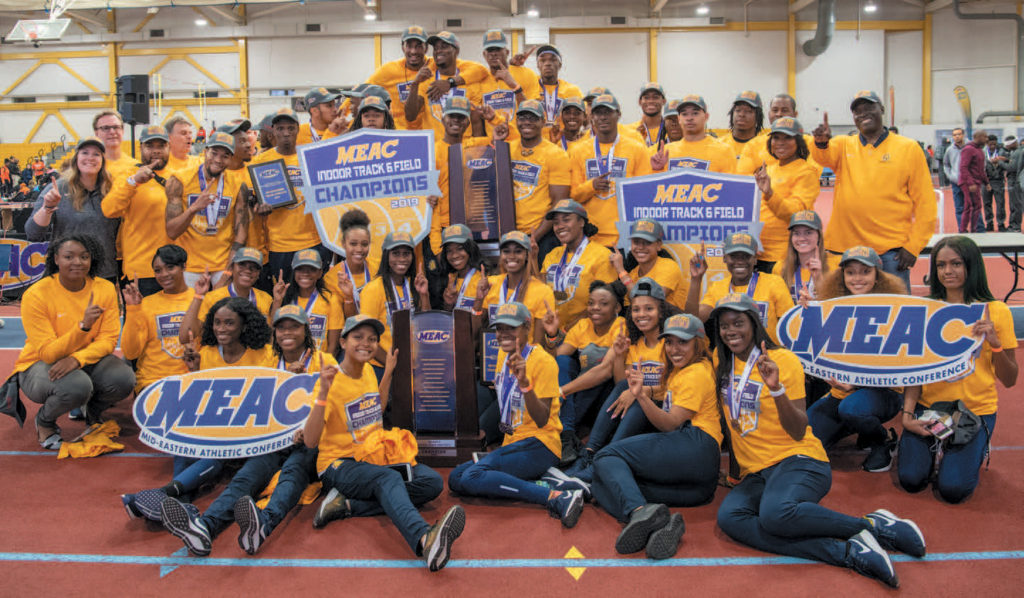 LANDOVER, MD – The North Carolina A&T track and field teams are starting to become historic and the student-athletes who comprise those teams are becoming legendary.
A&T is the first university in MEAC history to sweep the men’s and the women’s indoor championships three years in a row.

The women posted 174 points to beat Florida A&M (118.50), Bethune-Cookman (98), Norfolk State (78) and Morgan State (48.50) in the top-5 at the Prince George’s County Sports & Learning Complex. Whenever historic and N.C. A&T Athletics are mentioned, senior Kayla White is now part of the conversation.

White, the world record holder in the 200 meters, was named the meet’s Most Outstanding Runner after winning the 200m and 60-meter hurdles on Saturday. She finished second in the 60m to score 28 points for the Aggies throughout the meet. Duane Ross, the Aggies director of track and field programs, was named Outstanding Coach.

White continues to add to her impressive credentials as a student-athlete at N.C. A&T. White has won six gold medals at the MEAC Indoor Championships. She has won the 60mh all four years of her career and she adds a 60m and 200m title to her career totals. She will enter the MEAC outdoor championships this spring with eight gold medals.

The Aggies needed a big day on Saturday (Feb. 23) after coming into the final day in third place with 30 points. There was a point on Saturday when the Aggies were down by more than 50 points. But the Aggies were sparked by some familiar names like White and Madeleine Akobundu and some newcomers named Jayne Roberts and Cambrea Sturgis.

“I thought we could have performed a little better,” said Ross. “There were points we’re expecting to get that we didn’t, but then there were some people who stepped up and filled in the voids. Those things happen in championships. We just must go back and figure some things out, so we will be better moving forward. I do like the way this team pulled together and fought today.”

White is a face everyone around Aggieland is used to seeing. White broke two MEAC indoor meet records on Saturday. White won the 200m in with a MEAC record-breaking time of 23.53. Sturgis was right behind her in second at 23.75. Each runner bested the old mark of 23.85 set in 2000 by Norfolk State’s Debbie Dunn.

In winning her fourth straight conference title in the 60mh, White broke the meet record with a time of 8.07. It is three/tenths of a second off her personal record. Akobundu and junior TeJyrica Robinson helped the Aggies secure the top-3 finishers in the 60mh as Akobundu finished in 8.17 and Robinson crossed in 8.34.

White also had a stellar performance in the 60m by running a 7.26, but Norfolk State’s Kiara Grant broke the meet record in 7.22 to win the event. White was one/tenth of a second off her personal-best in the 60. Despite White’s one set back, the Aggies still scored big in the 60 as Sturgis finished fourth (7.47), Debose-Epps finished sixth (7.59) and Townsend finished eighth (7.66).

Junior Sun-Sara Williams took two gold medals back with her to Greensboro. She won the 400m in 56.03 with her closest competition being Morgan State’s Annastaci Barham who finished second in 56.51. Williams also teamed with junior Tori Ray, sophomore Payton Russell and freshman Nilaja Florence to win the 4×400 meter relay in 3:43.24.

The Aggies also put up points off the track. Sophomore Loren James won the shot put with her best throwing being measured at 48-feet, 4 ½-inches. Roberts and sophomore Nazah Reddick both had impressive second-place finishes in their respective field events. Roberts best pole vault was 11-feet, 5 ¾-inches to finish second and end the Aggies four-year grip on winning the event.

In the high jump, Reddick jumped 5-feet, 8-inches. Freshman Paula Salmon placed third (5-feet, 7-inches). Junior G’Jasmyne Butler was huge for the Aggies finishing second in the 1 mile (5:01.60) and 3000m (10:12.80). Junior Kristoni Barnes placed second in the 800 meters to secure even more points for the Aggies.