Senior Trevor Stewart and freshman Randolph Ross Jr., presented what might be considered coming attractions in the men’s 400 meters for the 2021 outdoor track and field season at North Carolina A&T’s Irwin Belk Track on Saturday.

Meanwhile, there was nearly a passing of the torch in the women’s 200 meters at Irwin Belk on Saturday.

All of this action and much more occurred as the N.C. A&T men’s and women’s outdoor track and field teams hosted the Aggie Invitational on a day that traded off cloudy skies for sunny weather before a downpour of rain came and prevented the men’s 5000m run and the women’s and men’s 4×400-meter relay races from being conducted.
Before the rain, however, the Aggies did get a chance to honor 17 seniors as a part of Senior Day.

Also, prior to the inclement weather, the Aggie Invite provided an opportunity for fans to see two of the best men’s 400m runners in Division I track and field. 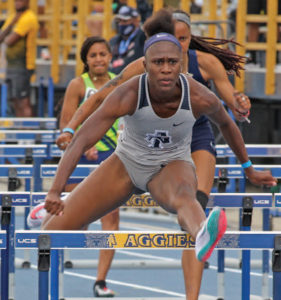 Ross Jr. held the lead early, but coming around the backstretch, Stewart started building momentum. When the runners got to the last 150 meters of the race, Stewart was in complete command, easing his way past Ross Jr. for the win. Stewart is now ranked ninth in the nation in the 400m, while Ross Jr. is 13th.

Another internal Aggie battle took place in the women’s 200m between former Aggie sprinter Kayla White and current standouts, sophomores Cambrea Sturgis and Kamaya Debose-Epps. White jumped out to the big lead but quickly saw that lead disappearing as Sturgis and Debose-Epps came on strong.

As the runners raced to the finish line, White, who earned multiple All-American honors during her four-year stint (2016-19) in an Aggies’ uniform, kept her composure to hold off the two current stars. White finished in 22.96, followed by Sturgis at 22.97 and Debose-Epps at 22.97.

Sturgis’ 22.87 ran at Texas Relays still has her ranked fifth in the nation in the women’s 200m. Debose-Epps’ 22.97 on Saturday has her ranked ninth.

Seven other Aggies earned the right to call themselves winners on Saturday. The Aggies were dominant in two of those events, including the women’s high jump and the women’s 100-meter hurdles.

In the women’s 100mh, the usual speedsters finished 1, 2, 3 and 4. Senior TeJyrica Robinson led the charge on Saturday by running a personal-best 12.97. Salmon crossed the finish line in 13.07, followed by senior Madeleine Akobundu in 13.27 and senior Breanne Bygrave in 13.38.

Robinson is tied for sixth in the nation after her Saturday performance, while Salmon is 10th after Saturday. 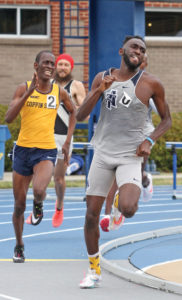 In the women’s 400mh, junior Sydni Townsend won the event in 58.48. while teammate and fellow junior Nilaja Florence finished second in 58.48.

Senior Loren James had a second-place finish in the women’s shot put with a personal-best throw of 49-feet, 3-inches. A&T returns to action next week as they head to the University of South Carolina to participate in the USC Open.