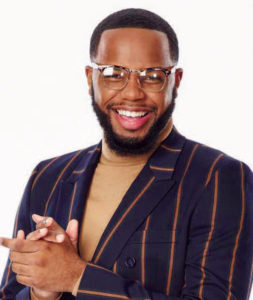 A&T senior Victor Solomon is competing on The Voice on NBC.

When Victor Solomon was in middle school, he won his eighth-grade talent show by singing John Legend’s “Ordinary People.” But he never could have guessed that just a few years later he’d be singing one of Legend’s songs in front of the celebrity musician on one of the most-watched TV shows on the air today.

Solomon and his three siblings were raised by a single mother. He remembers times when they went without electricity and water, but they were a tight-knit family and always got through difficult times together. Solomon started singing in church at the age of six and has continued to sing at church and with the North Carolina A&T University gospel choir, where he is currently finishing up his final year. In addition, he is this year’s Mr. A&T.

“The reactions I get from people when I sing is what inspires me to do it the most,” Solomon says. “Singing, in general, makes me feel good, but my gift isn’t only for me. I think it’s for the world. I want to inspire people to follow their dreams and do what they want to do in life and to just be successful in their own way.”

That mindset is what inspired Solomon to try out for The Voice. He knew it was a huge platform to get exposure and recognition as an artist, so he decided to send in audition videos. After a few interviews, he got the phone call that he was in.

In his blind audition on March 1, Solomon wowed the judges with a rendition of Legend’s song “Glory”—a piece close to his heart.

“Social injustice for African Americans is as relevant today as ever, so I thought it would be a good time to bring more awareness to people about what we go through as African Americans,” Solomon says.

Plus, with Legend as one of the coaches this season, Solomon knew it would be a great opportunity to showcase his vocal skills. And he was right.

Not only did Legend turn around, but it was the first time Legend ever turned around for a contestant singing one of his own songs in the history of The Voice. He even told Solomon that he did things with the song that Legend liked more than the original.

“That was incredible,” Solomon says of Legend’s comments. “Prior to The Voice, John has always been someone I’ve looked up to musically because of our voice similarities, but also other similarities, like our background. It was great to go on the show and sing a song by him and then, the unexpected happened, singing a song with him.”

As expected, Solomon’s family is ecstatic. His younger sister, who also attends A&T State University, arranged a watch party for his blind audition, and his older sister is already asking Solomon to take her to the red carpet and Grammy’s. His mother, of course, is proud and happy that her son is where he is today.

The Voice is an amazing opportunity for Solomon, and while he’s excited for everyone to see what happens on the show, he isn’t betting everything on being a celebrity.
“I will graduate soon and I plan to work at the current job where I’ve been promoted to manager,” Solomon says. “But God has been opening up doors for me since I arrived at A&T, so I’m only waiting for his will to be done and expecting the unexpected. I’m excited to see what the future holds, especially for my music career.”
The Voice airs on Mondays, 8 p.m. on NBC (WXII 12).