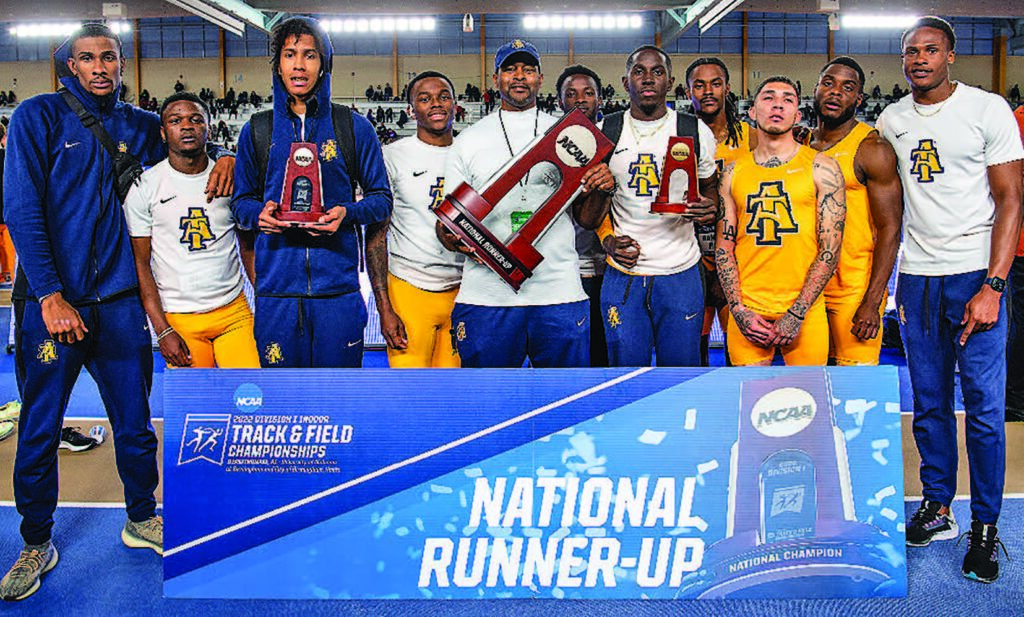 The N.C.A&TSU men’s track and field team at the 2022 NCAA Indoor Championships in Birmingham, Ala. Photo by Erin Mizelle/A&T Athletics.

The reaction at the time from A&T’s director of track and field programs Duane Ross was one of being proud of the accomplishment before adding, “We’re going to take this thing week-by-week until March 12th gets here. Then we’ll deal with who is the best at that time.”

On Saturday, March 12, at approximately 6:19 p.m., the Aggies had a chance to be the best as they realized they could walk away from the Birmingham Crossplex at the 2022 NCAA Indoor Track and Field Championships with the national title.

With one event remaining, the Texas Longhorns stood in first place with 39 points, and the LED board at the Plex showed the Aggies in second with 36 points. The Aggies made their run toward the top thanks to event national championships by junior Randolph Ross Jr. in the 400 meters and sophomore Javonte’ Harding in the 200 meters. 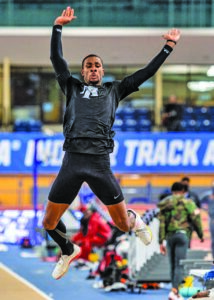 Oh yeah, that one event remaining just happened to be in the Aggies’ wheelhouse, the 4×400-meter relay. In 2021, the Aggies earned the national indoor and outdoor titles in the 4×400. Three members of their 2021 indoor national championship team — Ross Jr., Stokes and senior Elijah Young — prepared to defend their title on Saturday. Freshman Markevus Jackson ran the first leg.
But the Aggies finished ninth and failed to score. The Longhorns finished second, posting eight points to win the national title with 47.

A&T still made history by finishing second; placing higher than any historically Black college and or university (HBCU) indoor team at an NCAA indoor meet in history. Last June, the men finished third nationally at the NCAA outdoor championships.

Despite the historic achievement and the outstanding individual performances, there was a hint of disappointment on Saturday from A&T. It highlights that they are a program beyond displaying happiness about moral victories. They wanted and believed they had a national championship team.

“We came up short, ironically, in one of the events I did not expect,” said Ross. “How are we going to be defending champions indoor and outdoor, have three legs back from last year, and we don’t even score? If you bet me money that would have happened, I would have said no way. That was disappointing.

We, one, came in here wanting to win a national championship, and two, we thought our relay team would run better. Yeah. This one stings. But we will take this on the chin and get ready for the next one.”

But you don’t become the second-best collegiate indoor team in America without being impressive. Ross Jr. ran the third-fastest time in world history with his first-place 44.62. It marked the third time this year, Ross Jr. ran the fastest time globally, and he broke the Plex’s facility record.

Harding came into the indoor championships looking for redemption after stumbling in the 200 meters indoor final last season, which caused him to finish fourth nationally. He was also coming off an outdoor season where he had hamstring problems despite qualifying for outdoor nationals in the 100, 200 and 4×100.

There were no problems for Harding on Saturday. He trailed Georgia Bulldog Matthew Boling in the collegiate rankings most of the season. However, that was not the case at the NCAA indoor championships as he crossed the finish line in 20.46. Stokes finished in 20.861.

“To come out here and be able to do this is a tremendous feeling,” said Harding. “This year, I focused on executing throughout my whole race.”

Mustari said he did not get off to a good start in his race, but he added he pushed through to finish second. Mustari had a second-place ranking for most of the season. He finished second on Saturday in 7.63. Brown crossed in 7.77, pushing the Aggies into national championship contention.

“I’m so proud of our individual performances,” said Ross. “I don’t want those efforts to be overshadowed because we came up short. We wouldn’t be in a position to win a national championship if they didn’t do what they needed to do. They should be proud of themselves.”

As the Aggies move beyond March 12, where does Ross see the program heading into the outdoor season?

“We’re moving in the right direction,” said Ross. “But we are not moving as fast as I would like. I’ve been patient in building this thing the right way, but I have got to get the student-athletes who are sitting at home right now to buy in.”