A&T in stride at Aggie Invitational 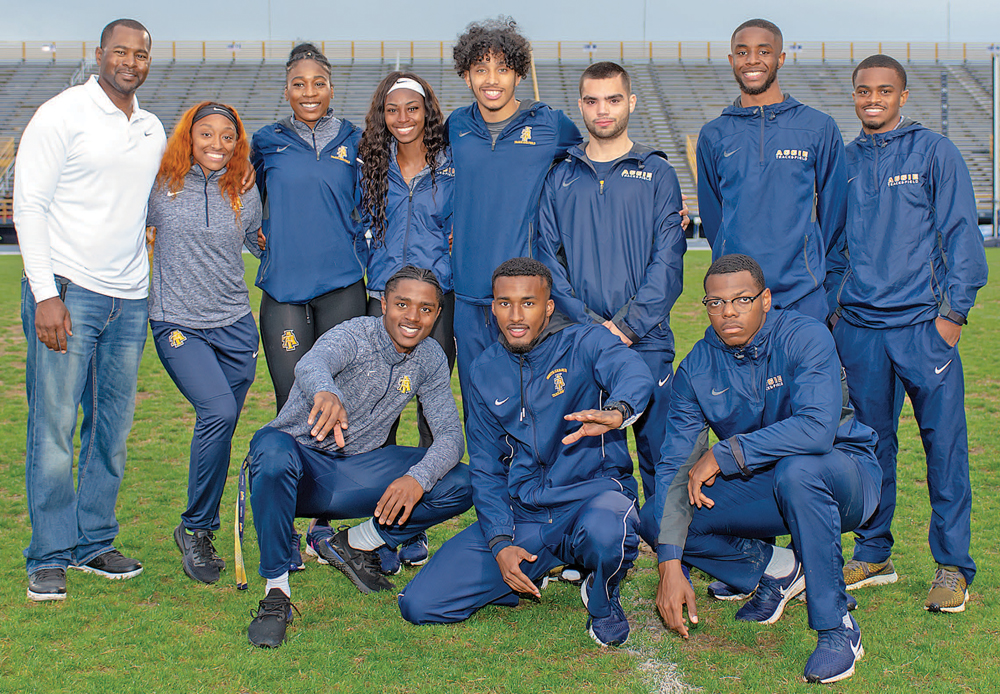 Despite all the rain that dripped onto the surface of North Carolina A&T’s Irwin Belk Track Saturday afternoon during the Aggie Invitational, the N.C. A&T track and field outdoor teams came away healthy, improved and drenched.

A day after looking excellent in the sprints at the Aggie Invitational, the Aggies returned on Saturday and had a good overall showing. There were wins in the throw, jump, and distant race events. And yes, of course, N.C. A&T also did pretty well in the sprints.

“Our team is definitely race-ready as we enter the second half of the season,” said Duane Ross, N.C. A&T’s director of track and field programs. “We’re also happy that the mass majority of the team is injury-free and racing well at the right time.”

On Friday, N.C. A&T claimed first place in the men’s and women’s 100 meters, the men’s 110-meter hurdles and the women’s 100mh. It was more of the same in the sprints and the hurdles on Saturday.

The Aggies claimed both 4×100-meter relay races. The men’s team of juniors Akeem Sirleaf and Trevor Stewart and seniors Michael Dickson and Rodney Rowe ran a 40.25. It was a little more than a second slower than the 39.21 the team ran at the Florida Relays on March 28. On the women’s side, the 4×100 team of freshmen Cambrea Sturgis and Kamaya Debose-Epps, junior Taliyah Townsend and senior Kayla White finished in 45.12 to beat St. Augustine’s by nearly two seconds. 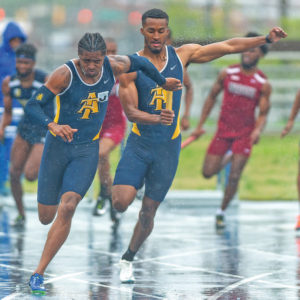 A&T senior sprinters Rodney Rowe and Michael Dickerson run as part of the 4x100m men’s relay team which placed first with a time of 40.25 seconds.
Photo by Kevin Dorsey/Carolina Peacemaker

There were two other relays on the day. The N.C. A&T men’s 4×400 team of juniors Kemarni Mighty, Chase Bonham and Brandy Felix and freshman Akeem Lindo won their race in 3:14.93. Bonham ran a 47-second split during the race. The women’s 4×4 team, freshmen Shalah Means, Monzerad Creary, sophomore Arianna Purvis and junior Kristoni Barnes finished in second place with a time of 3:50.05.

Townsend returned to the track to win the women’s 200m with a time of 23.91. It was Townsend’s first career win in the 200 as well as a personal record.
Another sprint victory came to N.C. A&T in the men’s 400m.

Sirleaf crossed the finish line in 47.01 to claim the win in what was his second 400m race of the season. He shaved off a considerable amount of time from his last 400m run, a 47.26 ran at High Point University’s VertKlasse Meeting on March 23.

Distance running continues to be an improved aspect of the Aggies’ team this season. N.C. A&T was successful in both 3000m steeplechase races. Junior G’Jasmyne Butler dominated her race by winning the challenging and grueling race in 11:41.70.

The men’s race came down to two Aggies. It appeared with 200m left in the race that senior Hakeem Mustafaa would earn the win, but teammate and senior Daquan Maddox sat back before making one final sprint toward the finish line to run past Mustafaa and win the race in 9:58.90. Mustafaa was second in 9:59.51.

There was a wealth of success in the throws for the Aggies as well. Three Aggies finished in the top-3 of the men’s shot put with sophomore Aaron Wilkerson leading the way with a throw of 51-feet, 1 ¾-inches. He was followed by freshman Obie Taylor in third (51-feet, ¼-inch) and senior Derrick Wheeler in fourth (47-feet, 4 ½-inches).

Sophomore Kevin Fofanah finished second in the men’s hammer throw with a toss of 176-feet, 4-inches. He finished behind an unattached competitor. Wheeler finished in third with a measurement of 170-feet, 4-inches.

“Our throwers continue to impress,” said Ross. “The sign of a good event area is when multiple athletes are battling for the top spot and we have that in the men’s hammer, discus and shot.”
N.C. A&T athletes will compete in two different competitions next week. Some athletes will head to Durham, N.C., to compete in Duke University’s Duke Invitational. Others will head to Baton Rouge, La., to compete in LSU’s LSU Alumni Gold meet.