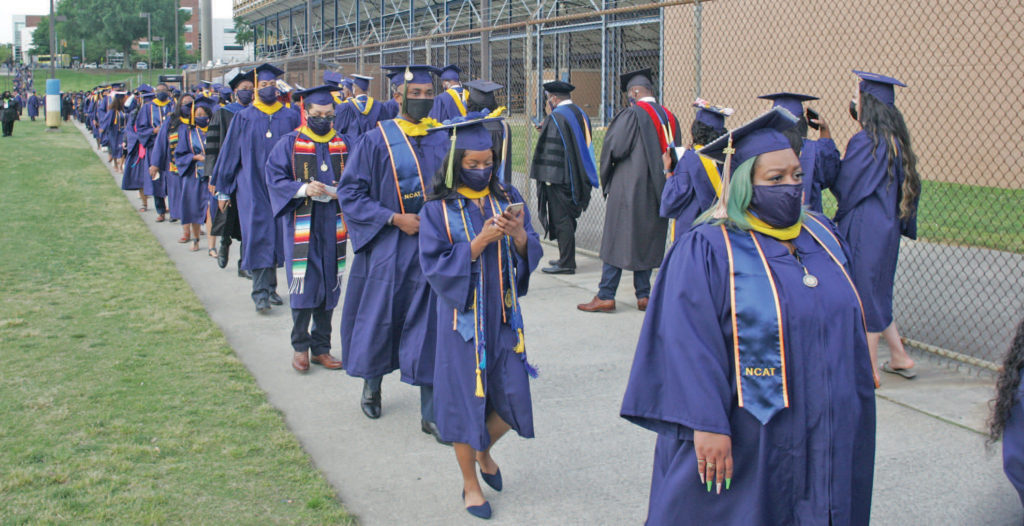 A&T celebrates its first graduation on campus in more than a decade.
Photo by Joe Daniels/Carolina Peacemaker.

After a year of virtual classes, rescheduling and hard work, graduates of N.C. A&T State University celebrated their accomplishments with an in-person commencement ceremony.

North Carolina Agricultural and Technical State University held two commencement ceremonies on Sunday, May 9, at Truist Stadium on campus. The first ceremony was at held at 8 a.m. for the spring 2021 graduates. The second ceremony, at 4 p.m., was for spring, summer and fall 2020 graduates, who missed out on an in-person graduation due to the COVID-19 pandemic.

According to the university, about 2,400 students applied to graduate or graduated this academic year, including about 1,600 this spring, making this semester’s graduating class the largest in N.C. A&T history. It was also the first time in more than a decade that graduation ceremonies have been held on campus.
Camryn Deanes, 2021 senior class president, and a journalism and mass communications major with a concentration in public relations from Bowie, Maryland encouraged her classmates to keep standing strong in face of adversity.

“It is important that we do not allow our adversities to define, in a negative way, our life’s experiences or college memories. We should reflect on those adversities and learn from the lessons that are heavily embedded in that adversity. This past year has shown us that we must not succumb to our circumstances, but rather conquer every challenge we face,” said Deanes.

In the second ceremony, Devin Henry, 2020 senior class president and journalism and mass communications major told his fellow classmates to keep forging ahead.
“We’ve waited a long time for this. We have been through our trials and tribulations, but now it’s time for celebration. Class of 2020, we have passed on the torch to another generation of Aggies. Let’s remember all of our achievements that have gotten us to this moment. Aggies survive, Aggies persevere, and Aggies endure because that’s what Aggies Do.”

Award-winning actor Sterling K. Brown (“This Is Us,” “Black Panther”) served as commencement speaker for both ceremonies through a pre-recorded video. Brown opened his speech by acknowledging the fact that the graduates survived a global pandemic that impacted their college experience, yet they overcame all the obstacles.
“If this pandemic has taught us anything it is the value of community and how precious and necessary it is for our survival,” he said.

Although Brown is not a graduate of A&T, he noted that the type of support and community that the university provides for its students is unmatched and that is something to cherish.

“You are stepping out into the world with something special. For the past two to five years, you have been able to live your lives not as an ‘other’ but in an environment that was made especially for you and your success. In a place that states, ‘you belong.’ You now get to take this Aggie Pride with you wherever you go. No one can take that away from you,” he said.

Brown also advised graduates that when finding your place in the world, do not let anyone diminish your shine.

“Do not let the world convince you that you are anything less than what you know yourselves to be,” he said. “Many of you will be stepping into scenarios where you will be treated like the other. In some cases, you may be the only. Do not let your circumstances dictate your level of success. You didn’t let COVID stop you from getting this diploma. Do not let this nation, which was built on the precepts of White supremacy; convince you that there is no seat for you at the table. Aggies win!”

He wrapped up his remarks by giving gratitude to families and supporters, telling graduates to simply do their best in life.

“A simple way to honor all who have been a blessing in your life is to do your best. Just do your best. Developing a habit of doing your best will always serve you,” said Brown. 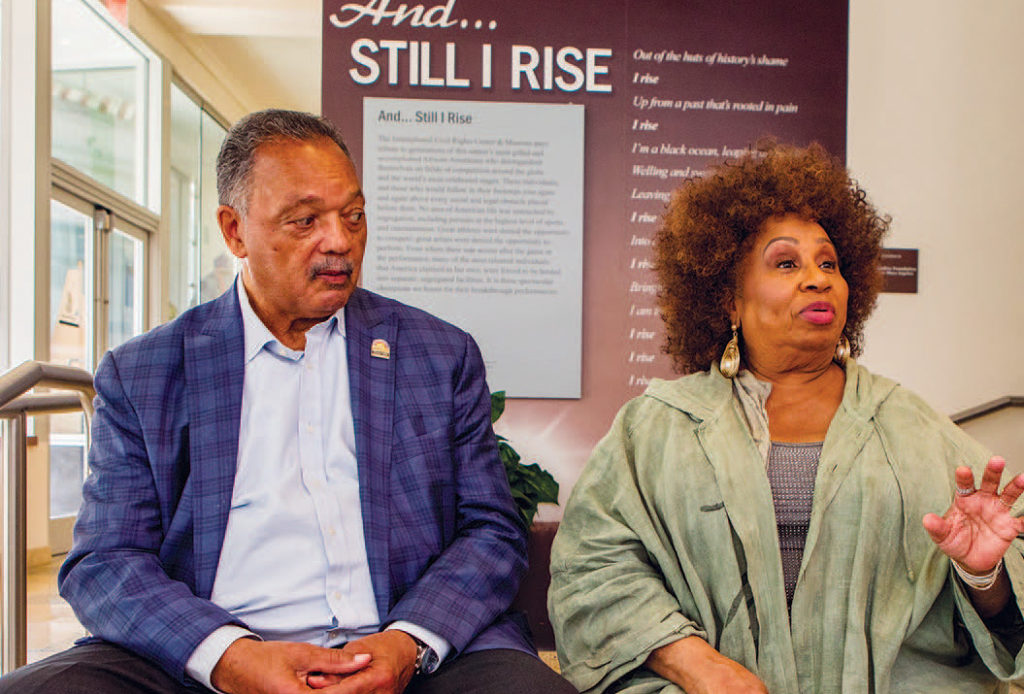 The university presented two honorary doctorates this year. Jacqueline L.B. Jackson, wife of Rev. Jesse Jackson, with an honorary doctorate at the morning ceremony. A native of Fort Pierce, Florida, Jackson studied sociology and psychology at A&T. She and Jesse married in 1962 as undergraduates. Jackson went on to have a long and distinguished career in civil rights and activism, alongside her husband. In an exclusive interview with the Peacemaker at the International Civil Right Center and Museum in downtown Greensboro, Jacqueline Jackson said, “I am very excited about this award because I asked God to allow A&T to accept me at the age of 17 when I applied at the time. And now to be invited back, this is just the icing on the cake for me and I am pleased to know that they have recognized my service to my husband and my country and my support for people across the world and their struggle for self-determination.”

“All of the friends that we made at A&T remained a part of our lives until their demise. They have just been a part of our family,” said Jackie Jackson. Her husband touted her foreign policy endeavors which included peace missions to Nicaragua and Lebanon.

While she recalls meeting her husband when they were both A&T students, Jackie Jackson said one of her fondest memories was meeting renowned American novelist, playwright, essayist, poet, and activist James Baldwin at A&T. “I was just in love with him and his work,” she said.

During the afternoon commencement, A&T presented a second doctor of humane letters to legendary entertainment entrepreneur Clarence Avant. A native of Greensboro, Avant became a renowned dealmaker, businessman and producer starting in the 1960s in the recording industry and later in the broadcast and film businesses. His incredible life and career were chronicled in the 2019 Netflix documentary, “The Black Godfather.” Avant was unable to attend the ceremony in person but sent a recorded message of gratitude for the honor.