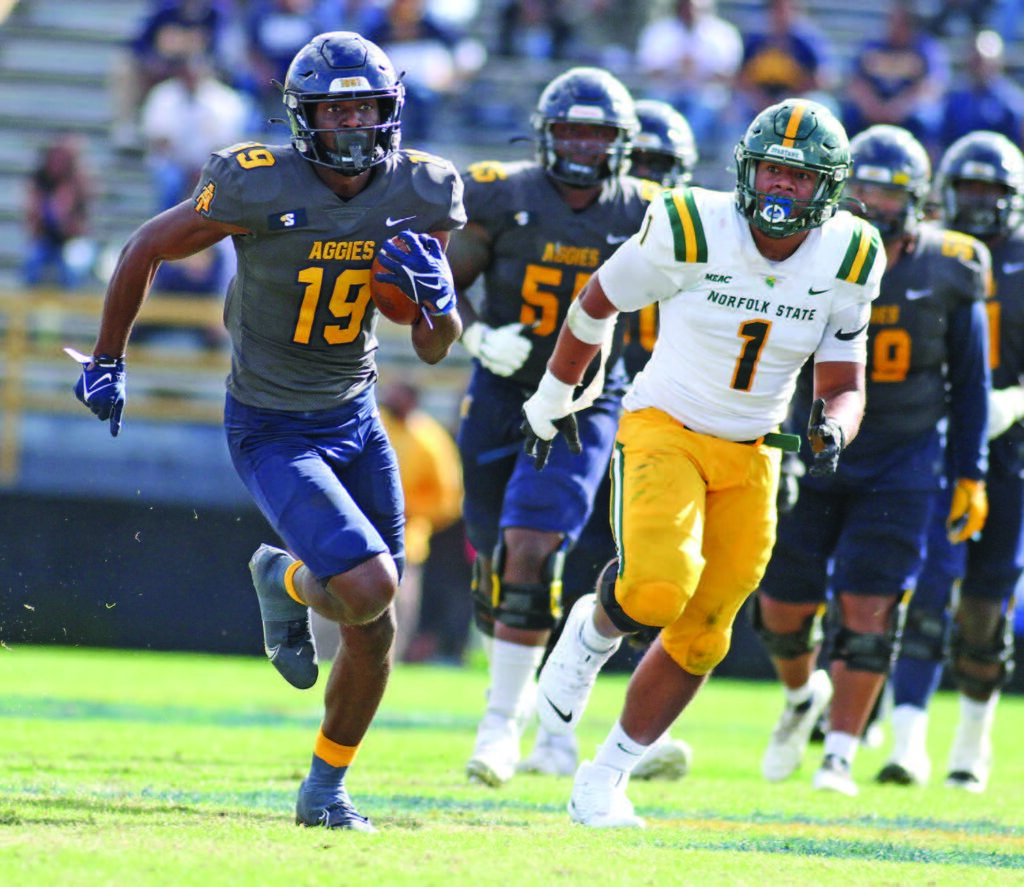 Senior receiver Zack Leslie breaks free for a 31-yard gain against the Spartans. Leslie finished with eight catches for 120-yards in the Aggies’ 49-24 victory. Photo by Joe Daniels/Carolina Peacemaker.

It wasn’t a flawless victory, but A&T displayed enough fire power against Norfolk State last Saturday to surge past a feisty Spartan team, 49-24, and remain unbeaten at home on a sunny afternoon at Truist Stadium.

Despite being penalized 13 times for 115 yards, the Aggies led from start to finish, racked up nearly 400 yards of total offense and recorded a season-high four interceptions to extend their winning streak to six games.

Still, A&T head coach Sam Washington has his sights set on earning a conference title in the Aggies’ final year in the Big South and making a run in the FCS playoffs. He knows in order to reach those goals, his team must finally solve its lingering penalty issues. 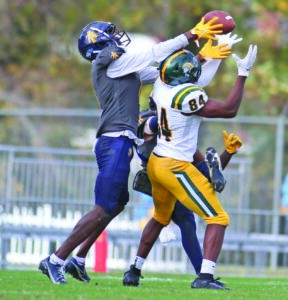 “I can’t say what I would like to say,” Washington admitted afterwards. “We are going to have to find a way. One of the things when it comes to this type of teaching is negative reinforcement. We like to find ways to punish or penalize people to get the response we want. That could jeopardize the team when you do stuff like that. But at this point, I feel it’s necessary.”

Next up for the Aggies will be a Big South conference showdown against Charleston Southern this Saturday at 12 p.m. in what will be final home game of the regular season and Senior Day.

The Buccaneers (2-7 overall, 2-2 in the Big South) are coming off a 34-21 conference win over Robert Morris last week, in which they limited the Colonials to just 14 net rushing yards while gaining 207 yards on the ground themselves.

Last year, A&T overwhelmed the Buccaneers 21-18 on a wet, windy day in Charleston – recording a school-record 11 sacks and holding CSU to minus three yards rushing.

This time around the Aggies will look to duplicate that defensive intensity while finding a way to cut back on their own self-inflicted mistakes and mental errors.
A&T currently ranks next to last in the Big South, averaging 72.2 yards in penalties per game.

Making the task even more difficult last week was that A&T had 14 players diagnosed with the flu before the kickoff and four were unable to suit up.

One of the backups who was thrust into action was sophomore defensive back Aaron Harris who responded by making two big interceptions against the Spartans.

Another player making a huge contribution on the defensive side of the ball was junior linebacker Jacob Roberts who became the first Aggie to return an interception for a touchdown in back-to-back games. He had a 39-yard return against Campbell on homecoming and a 22-yard return last weekend against Norfolk State.
Roberts also led A&T with 12 tackles against NSU, marking the seventh double-figure tackle performance of his career.

On offense, sophomore running back Bhayshul Tuten again led the way – rushing for 117 yards and a career-high three touchdowns against Norfolk. He extended his consecutive streak of 100-yard rushing games to a school-record eight games.

Leslie needs 14 receiving yards to become just the fourth Aggie to record 2,000 in a career. His 132 receptions rank him fourth all-time on the school list.

Washington knows his team will have to play with great energy and focus if they hope to avoid an upset this Saturday against Charleston Southern.

“They are a team that’s not winning but isn’t playing badly,” he said. “They will put it all together at that one moment; you just don’t want it to be you on the opposing side when it happens. I’m hoping we can get some of this flu stuff under control this week. We’ve returned to masks 100 percent and tried to take electrolytes to boost our immune systems. We have also been drinking water and Gatorade. We’ll see.”