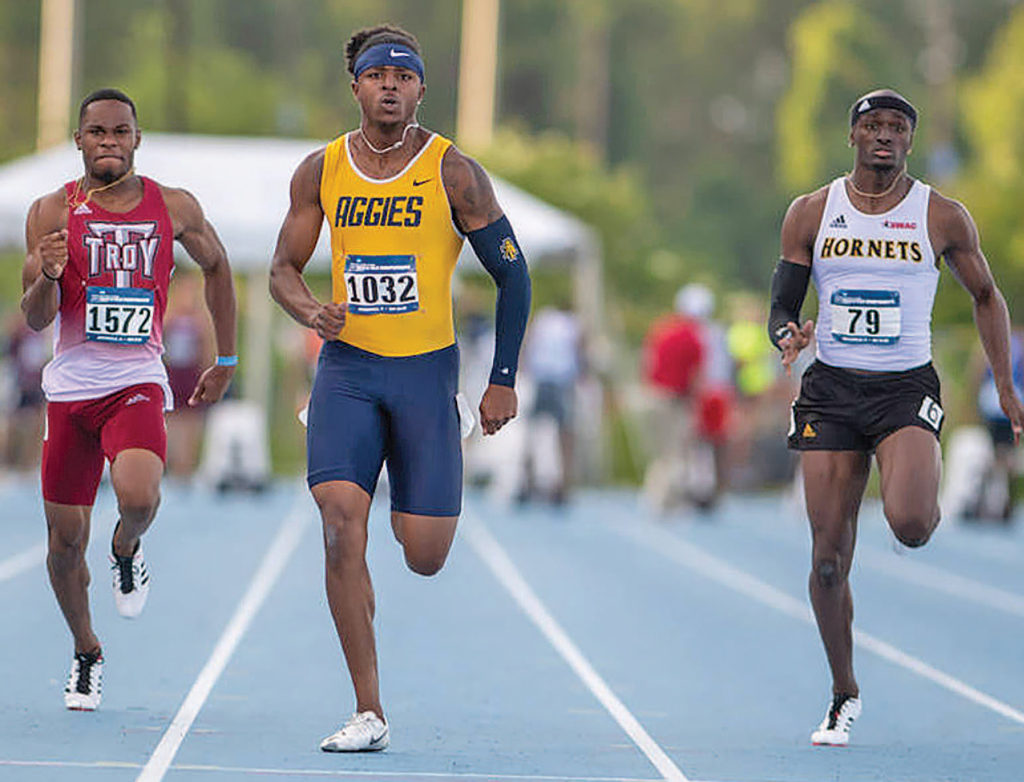 A&T senior Rodney Rowe qualified for the NCAA Nationals in the 200m with a time of 20.15 seconds. Rowe also anchored the 4x100m relay team to a fourth place finish with a time of 39.14 seconds. Photo courtesy of Erin Mizzelle

JACKSONVILLE, Fla. – With all four relay teams earning their way to the NCAA Outdoor Track and Field Championships scheduled for June 5-8 at the University of Texas, the path is now set for the North Carolina A&T men’s and women’s track and field teams to accomplish things no other Division I school its size or resources has ever done nationally.

Saturday was the final day of the 2019 NCAA Division I East Preliminary Round held at the University of North Florida at Hodges Stadium. The Aggies women’s and men’s 4×100-meter relay teams qualified for NCAA Nationals along with their men’s and women’s 4×400 relay teams.

In addition to four relay teams in Austin, Texas, the Aggies will also be featured in several other events at nationals. Those events could equate to numerous points for the Aggies as they go after individual, relay and team national championships in June. The top-12 from each heat advances. The 12 are made up of the top-3 finishers from each heat and the next three best times.

Two of those women with excellent chances of bringing home a national championship for the Aggies are freshman Cambrea Sturgis and senior Kayla White. Sturgis and White had the top two times in the women’s 200-meter quarterfinals on Saturday.

Two Aggies will be competing on the men’s side of the 200 as well. Senior Rodney Rowe and junior Akeem Sirleaf qualified for nationals on Saturday as Rowe ran a 20.15, three-tenths of a second off his personal best to finish fifth in the quarters. Sirleaf finished tied for 11that 20.483.
The Aggies added to their list of national participants starting with the women’s 4×100 on Saturday. Freshman Kamaya Debose-Epps, junior Tori Ray, Sturgis and White finished in 43.41 for the fifth-fastest time in the qualifying race.

On the men’s side, it was senior Michael Dickson, junior Akeem Sirleaf, freshman Malcolm Croom-McFadden and Rowe with the fourth-fastest time as they finished in 39.14 to qualify for nationals.

In the women’s 4×400, it was Ray, juniors Sun-Sara Williams, Kristoni Barnes and freshman Nilaja Florence who advanced to Texas. They finished in 3:33.38 for the fourth-fastest time. On the men’s side, juniors Trevor Stewart and Kemarni Mighty, senior Justin Hamilton and Sirleaf qualified in the 4×400 with a time of 3:04.21. It was the third-fastest time of the day.

The list of Aggies headed to the NCAA Nationals is an impressive one including two additional athletes who made through on Saturday in the hurdles. Junior Madeleine Akobundu is headed to Texas in the women’s 100-meter hurdles after finishing eighth in 13.17.

Dickson qualified for nationals after running one of his best men’s 110mh times. Dickson was four-tenths of a second off his personal-best time by running a 13.58 to finish with the seventh-best qualifying time.

In addition to what they accomplished Saturday, the Aggies will have a presence in other events at the University of Texas.

White and Sturgis will compete in the women’s 100m while Rowe will go after national championship and All-American honors in the men’s 100. Stewart is going to Texas with the best men’s 400m time in the nation. Sirleaf will also compete in the men’s 400 to go along with his participation in the men’s 200, men’s 4×1 and 4×4.

Ray qualified in the women’s 400 for nationals. She will compete in two other events – the women’s 4×1 and 4×4. Freshman Akeem Lindo is headed to Texas in the men’s 400mh.