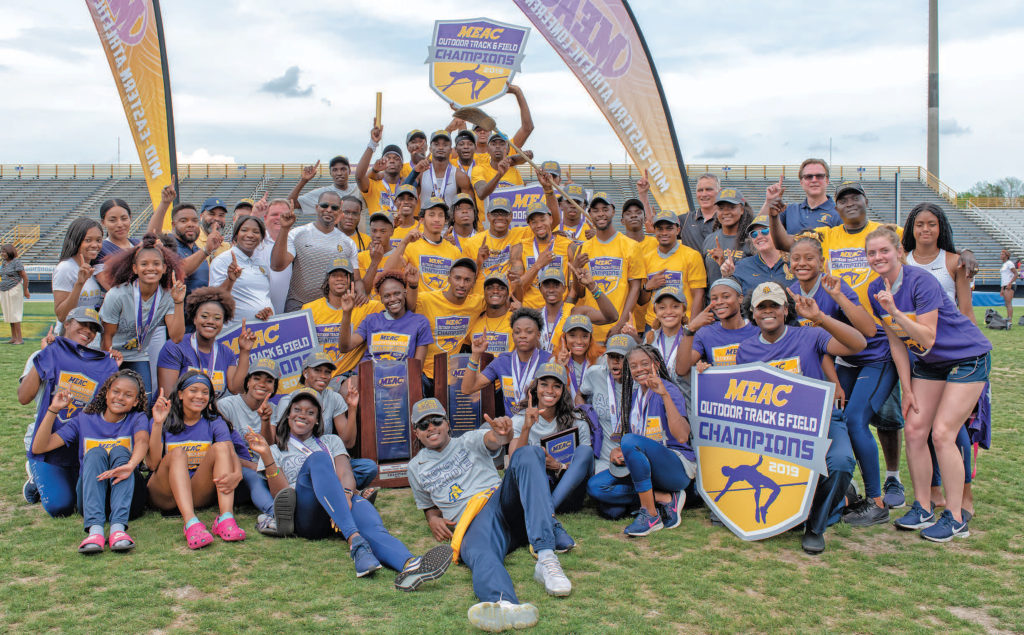 Florida A&M has proven to be a formidable opponent for the North Carolina A&T women’s outdoor track and field team over the past two years at the Mid-Eastern Athletic Conference (MEAC) Outdoor Track and Field Championships. They would prove the same at this year’s outdoor conference championships. It was the Rattlers who prevented the Aggies from repeating last season, and it was the Rattlers who led by more than 100 points after the first two events were scored on Saturday during the final day of the championships.

N.C. A&T overcame the deficit by scoring some unexpected points in the field events early before dominating the competition on the track.

The Aggie women won seven events on Saturday and claimed gold, silver and bronze in two of those events to stage the comeback.

The Aggie women posted 198.5 points to outlast the Rattlers’ (189.5). Bethune-Cookman (116), Howard (67) and Norfolk State (65) rounded out the top-5 on the women’s side. For the second straight season, senior Kayla White was named the meet’s most outstanding runner.

“To see us fight back the way we did was the highlight of my weekend,” said Duane Ross, the Aggies’ director of track and field programs. “I was sitting around calculating in my head how in the world are we going to make up all those points. But winning the pole vault got our team going. By the time the sprinters and distance runners hit the track, it was a snowball effect. We were off and running.”

White ran an NCAA-best 10.96 to win the 100 meters. According to the United States Track and Field Cross Country Coaches Association, it was the fifth-fastest collegiate time ever. White also ran an NCAA-best 22.52 to win the 200. White was also a part of the Aggies 4×100 championship team.

“After the 100 meters I knew we were going to win,” said Ross. “We had a few events left, but just to see the momentum and how they were focused, I felt good about what we were doing. I knew we would pull it out.”

Ross also had a good vibe when he saw junior Tori Ray bounce back from her disappointment in the 400 last year to win with a time of 52.73.

Junior Madeleine Akobundu won the 100-meter hurdles in 12.81 and was surrounded at the podium by junior teammate TeJyrica Robinson (12.98) who finished second and freshman teammate Paula Salmon (13.35) who came in third. N.C. A&T also populated the awards stand in the 200 as White was followed by freshman Cambrea Sturgis (22.62) and freshman Kamaya Debose-Epps (23.14).

“Kayla was a huge part of us coming back because our younger athletes follow her,” said Ross. “When you’re at this level you have to be mindful of the things you say and the things you do because they’re watching even when you don’t think they’re watching. For them to see her still working hard helps them learn all the right things to do.”

But it was junior Jayne Roberts who got the Aggies rolling on Saturday by winning the women’s pole vault with her best vault recorded at 11-feet, 9 ¼-inches. The Aggies then had Gabrielle Ryan score in the javelin by finishing fourth place (104-feet, 4-inches) to give the Aggies points they were not expecting.

The Aggies women now have won two of the last three outdoor conference titles and three straight MEAC indoor titles. There is no reason to believe the winning will stop. The Aggies lose White after this season, but they return numerous freshmen and juniors next season along with a strong recruiting class coming to AggieLand.

“I think there is a chance to get caught up in complacency when you call yourself a dynasty, so I don’t want to go there,” said Ross. “But I think we’re at the point where we can say that’s what we’re building toward.”

During the final day of the MEAC Outdoor Track and Field Championships, the A&T men scored 211 points to cruise past Bethune-Cookman (178). Norfolk State (135.5), Coppin State (58) and Morgan State (45.5). Those teams rounded out the top-5 on the men’s side.

It was the third straight title for the men’s outdoor team to go along with their three straight MEAC indoor titles and their 2018 MEAC men’s cross country championship.

“Based on some of the times we put up, this is the best MEAC championship we have ever had,” said Duane Ross, the Aggies’ director of track and field programs. “If there are teams out there who didn’t know we are for real about being a nationally-recognized program, they have not been paying attention. Our times today show we mean business.”

Senior Trevor Stewart was the main highlight for the men. Stewart won the 400 meters by running the 14th-fastest time ever in the world at 44.38. Stewart will head to the NCAA Division I East Regional Preliminary Round (regionals) with the No. 1 team in the nation.

“I think he is going to be the future in the 400-meter event,” said Ross. “I’m talking about in the world. I think once he matures, I think he can be an Olympian, a world champion, you name it.”

Senior Rodney Rowe also looks to make noise once regionals and nationals arrive. Rowe had a thrilling come-from-behind win in the 100m to walk down S.C. State’s Demek Kemp as Rowe finished with a personal-best 10.05 to claim gold. Rowe won the MEAC 200 for the second straight year.

Rowe ran a personal-best 20.12 to move to No. 2 nationally in the country. Four other Aggies scored in the event with Akeem Sirleaf coming in third (20.37), Stewart finishing fourth (20.51), senior Justin Hamilton placing seventh (21.26) and senior Michael Dickson finishing eighth (21.42). Rowe was also a part of the 4×100-meter relay team along with Malcolm Croom-McFadden, junior Akeem Sirleaf and Dickson that finished first in 39.14.

“Even though he was down, there was no doubt in mind Rodney was going to win those races,” said Ross about the 100 and 200 for Rowe. “He has got too much pride, and he is running at home.”
In his final MEAC outdoor track meet, senior Lasheon Strozier also won the triple jump with a jump of 50-feet, 4 ¾-inches. It was his first-ever conference outdoor title in the triple jump. Freshman Regan Kimtai captured the 1,500 meters, finished third in the 3,000m steeplechase and second in the 800m.

Dickson won his second career MEAC outdoor title in the 110mh with a time of 13.82. Junior Robert Miller also scored in the event by finishing fourth at 14.04. And what has become an annual tradition for the Aggie men, they closed out the MEAC outdoor event by winning the 4×400.

This year’s team consisted of freshman Akeem Lindo and juniors Brandy Felix, Chase Bonham and Kemarni Mighty. They ran 3:09.15 to mark the fourth straight year the Aggies have won the 4×400 at the MEAC outdoor. It was Lindo, Bonham and Felix who finished second, fourth and fifth in the 400mh to post 17 points for N.C. A&T.

“There is no better feeling as a coach than to know you can depend on your guys when it is championship time,” said Ross.