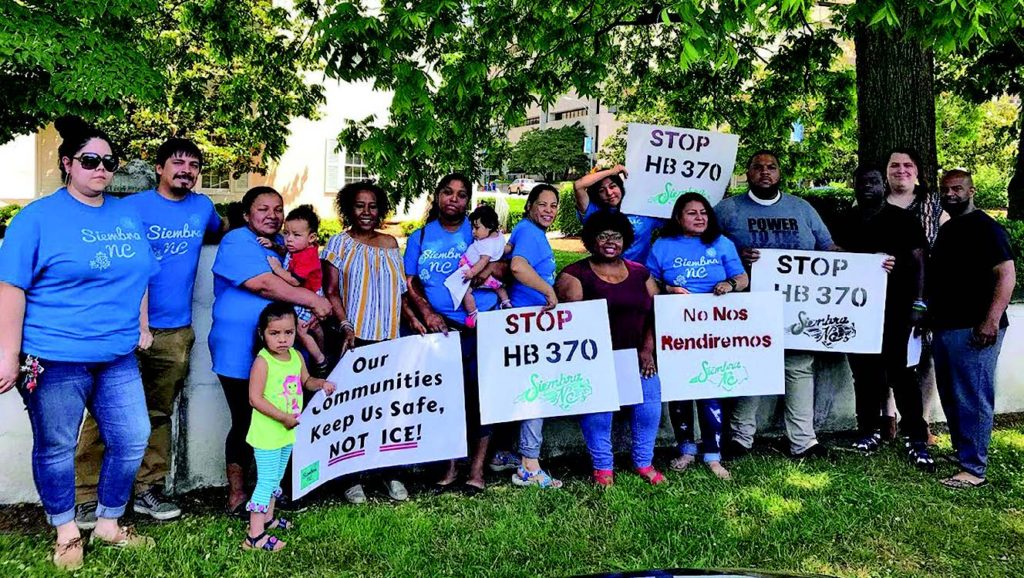 African American and Latino area residents gather outside the Guilford County Sheriff’s office in Greensboro to voice their opposition to N.C. House Bill 370, which requires N.C. Sheriffs to cooperate with ICE. Photo courtesy of Courtesy AFSC.

More than a dozen Black Greensboro and High Point residents stood beside Latino community members at a press conference and rally at the Guilford County Sheriff’s Office on Friday, May 24.

“We are here today in solidarity with this community,” because we “are support of our immigrant community,” said Rev. CJ Brinson, a youth pastor and Greensboro NAACP member. “Considering the history around citizenship for African Americans in this country, we have a moral obligation to be in solidarity with others as they seek to have their lives affirmed…”

The groups rallied in opposition to N.C. House Bill 370, a bill that would require county sheriffs to cooperate with U.S. Immigration and Customs Enforcement (ICE) and honor the federal agency’s request to hold someone in jail even though they are eligible for release.

Juan Miranda, organizer with Siembra N.C., a grassroots group of undocumented Latino residents fighting for immigrants’ rights said, “HB 370 is an anti-immigrant bill. No matter how you phrase it, the loopholes, or amendments you add. If you don’t oppose it then you’re not doing your best to support the immigrant community,” said Miranda, who added that the group wants to continue to work with the sheriff on this issue.

“We want the sheriff to know that regardless of what has happened so far we are here to support him. We’re willing to hear any feedback on how to make this relationship better, but he must know that we will do whatever it takes to keep our families together,” he said.

The group requested that Guilford County Sheriff Danny Rogers allow Spanish-speaking residents to speak with him directly. Members sayg that the sheriff declined to use interpreting equipment he had been provided for a meeting with the group on May 13. They also asked that the sheriff’s office oppose all versions of HB 370 and to listen more closely to the concerns of undocumented parents about holding license checkpoints close to schools.

Although not present at the rally, Sheriff Rogers and the Guilford County Sheriff’s Office Attorneys made clear Roger’s position on immigration in a released statement:

“Guilford County Sheriff’s Office ended its involvement in the 287(g) program in 2012 and Sheriff Rogers will not renew the program under his watch.
Guilford County Sheriff’s Office will NOT enforce the 48 hour hold provision in ICE Detainers after an inmate’s State criminal charges have been resolved. The only exception will be when ICE presents an actual warrant or order issued by a Federal judicial official (i.e., a Federal Judge or Federal Magistrate).

Guilford County Sheriff’s Office is going to begin accepting FaithAction ID cards for identification purposes and is currently in the process of finalizing its agreement with FaithAction International House.”

Republican state legislators filed HB 370 in March 2019 titled ‘Require Sheriff Cooperation with ICE.’ It passed in the state House in April and now sits in a Senate committee after passing the first reading.

According to state Rep. Destin Hall, R-Caldwell, the bill’s primary sponsor, the bill would not mandate that sheriffs enforce federal immigration law, but rather the bill is asking sheriffs to cooperate and communicate with federal law-enforcement officials.

However, the bill includes a provision that if a city, county, or law enforcement agency is found to be non-compliant, the superior court could issue penalties of up to $1,500 per day, and subsequent offenses would be up to $25,000 per day.

The N.C. Sheriffs’ Association (NCSA) and the American Civil Liberties Union of North Carolina (ACLU), both statewide organizations, have also released statements in opposition to the bill.

“The people of each county, as reflected by the decision of their elected sheriff, should retain the ability to decide which lawful method they will utilize in complying with existing federal and state law,” the NCSA said in a statement.

The ACLU called the bill, “blatant political retaliation against the growing number of sheriffs across North Carolina who have pledged to not assist ICE with targeting or detaining community members for immigration offenses.”