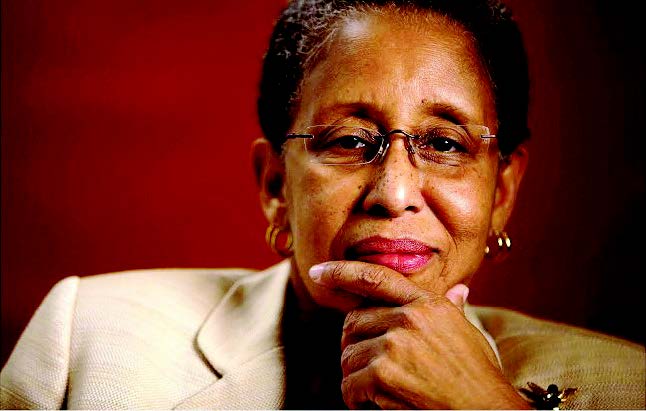 Last weekend, by order of Gov. Roy Cooper, state government building flags flew at half-staff in honor of an inspiring leader who was best known for standing strong for Black economic development and advancement. She mentored many to become public servants and leaders in Black and women-owned businesses.

And she rarely said “no” if she knew she could help anyone in need in the community.

The death of activist and Black economic development leader Andrea Lynette Harris, 72, last week, co-founder of the nonprofit N.C. Institute of Minority Economic Development (aka “The Institute”) came as a shock to those who knew, loved and respected her. The sincere and overflowing outpouring of sorrow and condolences were testament to the impressive legacy of service Ms. Harris gave the state of North Carolina.

“It is not enough to just be in the room,” Ms. Harris is famous for saying, “you must be at the table.”

She is credited with generating more than $1 billion to Black and women-owned businesses, which, in turn, has led to home ownership across the state.

“Andrea Harris was a trailblazer who never stopped fighting for social and racial equity in our state,” said Gov. Cooper in a statement May 20th. “When doors were intentionally shut, she broke through for women and minority-owned businesses to succeed, modeled excellence in advocacy and mentored scores of freedom fighters. She left an indelible impact on North Carolina’s business and African American communities, and she will be missed.”

“Kristin and I send our prayers and deepest condolences to her friends and loved ones.”

It was Ms. Harris’ vision that created The Institute in 1986, and she led it for the next two decades, helping marginalized and disenfranchised African Americans and women navigate the perilous waters of business creation and wealth building.

During her career, Harris and her work has been heralded with many honors, including the Order of the Long Leaf Pine, the state’s highest honor.

“Ms. Harris was a counselor, friend, mother, sister and leader to many, well-beyond her birth family,” said Kevin J. Price, current president/CEO of The Institute. “We stand on her shoulders and will honor her legacy by tirelessly continuing her work, serving those who are marginalized and/or face unnecessary challenges and barriers limiting the ability of living their best life. She will truly be missed.”

Andrea Harris grew up in Henderson, N.C., and graduated from Bennett College for Women in Greensboro in 1970. It was there where she developed her keen social consciousness. Harris later became executive director of a community action agency fighting poverty in Henderson.

It was 1986 when Harris went to Durham, and cofounded The Institute on “Black Wall Street” there.

Upon word of her passing, condolences from across the state flooded in, like from her alma mater, Bennett College, where she served as a trustee, Yvonne Lewis Holley, Democratic candidate for Lt. Governor, U.S. Rep. David Price (D-NC-4), Former Durham Mayor Bill Bell, U.S. Rep. G.K. Butterfield (D-NC-1), the N.C. Black Alliance, and so many others.

“Thank you, Andrea for lighting the way for so many others including myself,’ said U.S. Rep. Alma Adams (D-NC-12).

It was Sept. 10, 2018, when Andrea Harris wrote Rev. Dr. T. Anthony Spearman, then the president of the North Carolina Council of Churches, petitioning him to oppose gentrification in a certain section in Durham, where Black families were losing their homes to Whites who were doing little to be considerate of the families they had just displaced.

In that letter, Harris told Rev. Spearman, “We all must be treated with dignity,” a sentence that Spearman says is a good summation of who Andrea Harris was.

“A mighty builder of some sturdy bridges has exchanged life for life eternal,” Rev. Spearman said in tribute. “Andrea Harris has been a friend, confidante, counselor, consoler, woman of conviction and encourager.”

In lieu of flowers, the Harris family asks a donation to Bennett College be made in memory of Andrea Harris: Bennett College, Attn: Institutional Advancement, 900 E. Washington Street; Greensboro, N.C. 27401