America’s mistreatment of its Black citizens

When a seventeen-year-old White boy walks down the streets of Kenosha, Wisconsin, with a loaded automatic weapon, he is cheered and thanked by the police and offered a water bottle. No matter that he’d killed two people and wounded another. His attorney says it was self-defense, and Kenosha Sherriff Miskinis said the shootings would not have happened had those killed not broken curfew. Later he “clarified” his remarks, but his callousness was frighteningly evident.

Speeches at the Republican National Convention painted a wildly inaccurate picture of the Democratic Biden/Harris ticket. It would not be “safe,” said VP Mike Pence. There will be lawlessness, violence, and destruction, said Rudy Guiliani. And count on the Republican presidential nominee to stir the pot during his dystopic 70-minute combination of lying bombast and dire predictions. Through it, all the words “looting” and “lawlessness” were repeatedly used.

Black folks are all too familiar with lawlessness. After the aching oppression of enslavement, much of which was lawful, we endured the post-Reconstruction era where laws were made to re-enslave the recently emancipated with Jim Crow “laws” voter suppression, random violence against Black people deemed “insolent” and others. Rabid racists took Black people’s property, raped Black women and girl-children, and experienced no consequences.

Though much of this was against the law, White law enforcement did not enforce the law, so there were few arrests, even fewer trials, and hardly any convictions. A White man was more likely to be convicted of killing an enslaved person (and usually fined) because they “destroyed someone’s property than to be tried or convicted because they killed a Black person.
Consider the lynching of Anthony P. Crawford, a Black man of considerable property who was lynched on October 21, 1916, in Abbeville, South Carolina. Crawford owned 427 acres of “prime cotton land” and was wealthy enough to lend money to both Black and White farmers. He was a civic-minded AME church member but was described by some Whites as “rich for a (N)egro and insolent along with it. Anthony Crawford, born enslaved, had land worth $20,000 in 1916 or $500,000 today. 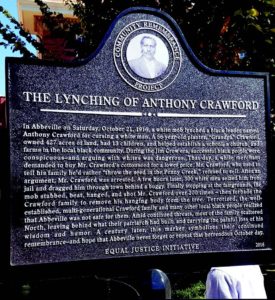 One day Crawford went to the county seat to sell cottonseed and other goods at the county seat. The owner offered him five cents a pound less than he offered Whites. Crawford, being “insolent” said he would rather dump his cottonseed in the river than be cheated, using colorful language. He was arrested for cursing at a White man. He bailed himself out. He had it like that and attempted to head home when a White mob attacked, beat and lynched him. The cabal may have been as many as 300 strong. The sheriff asked the mob to let the law take its course, but they preferred to physically destroy a prominent man, undoubtedly the source of considerable economic envy. How’s that for lawlessness, Trump, Pence, Guiliani? With all the RNC talk of fear, there was no reference to how Black men and women feel when they get behind the wheel of a car and drive in a rural area. Because of our double standard, White fear matters more than Black fear.

We often are told that lynchings occur when Black men “violate” White women. That isn’t the case! Many Black men were killed or lynched because they had too much money, like Anthony Crawford. After the lynching, a newspaper editorialized, “the black must submit to the white, or the white will destroy him.” No one was arrested, tried, or convicted for this lynching. However, a “civic meeting” voted to tell the Crawford family that they had to leave Abbeville within a month, and their property was seized. Two of the mobsters who participated in the lynching were named executors of Crawford’s estate. The tight-knit family was scattered, their wealth appropriated by the lawless and disordered.

Thousands of Black people experienced the same loss of life and property as Anthony Crawford, of people expelled from “sundown towns” on a ruse of Black men and women lynched because they were “insolent.” The fact that Black people could accumulate, even in the face of the history of lynching, intimidation, and property appropriation, is a refutation of the White presumption of Black inferiority. That history is at the root of the contemporary racial wealth gap.

Our 45th President waxed eloquent on our nation’s history without mentioning our nation’s foundational flaws because “we build the future, we don’t tear down the past.” He suggests we should “embrace history.” The history of racism, predatory capitalism, and exploitation cannot be embraced. When statues and monuments celebrate that sickness, there are those prepared to tear them down in the name of justice. His name was Anthony Crawford. Say his name. For too many Black people, law and order meant lawlessness and disorder.

Nobody at the RNC bothered to mention this history of lawlessness while disparaging peaceful protestors. The double standard of law and order is as clear today as 104 years ago when envious and evil White people lynched Anthony Crawford. And no one can speak of unity until our nation acknowledges its exploitative past.