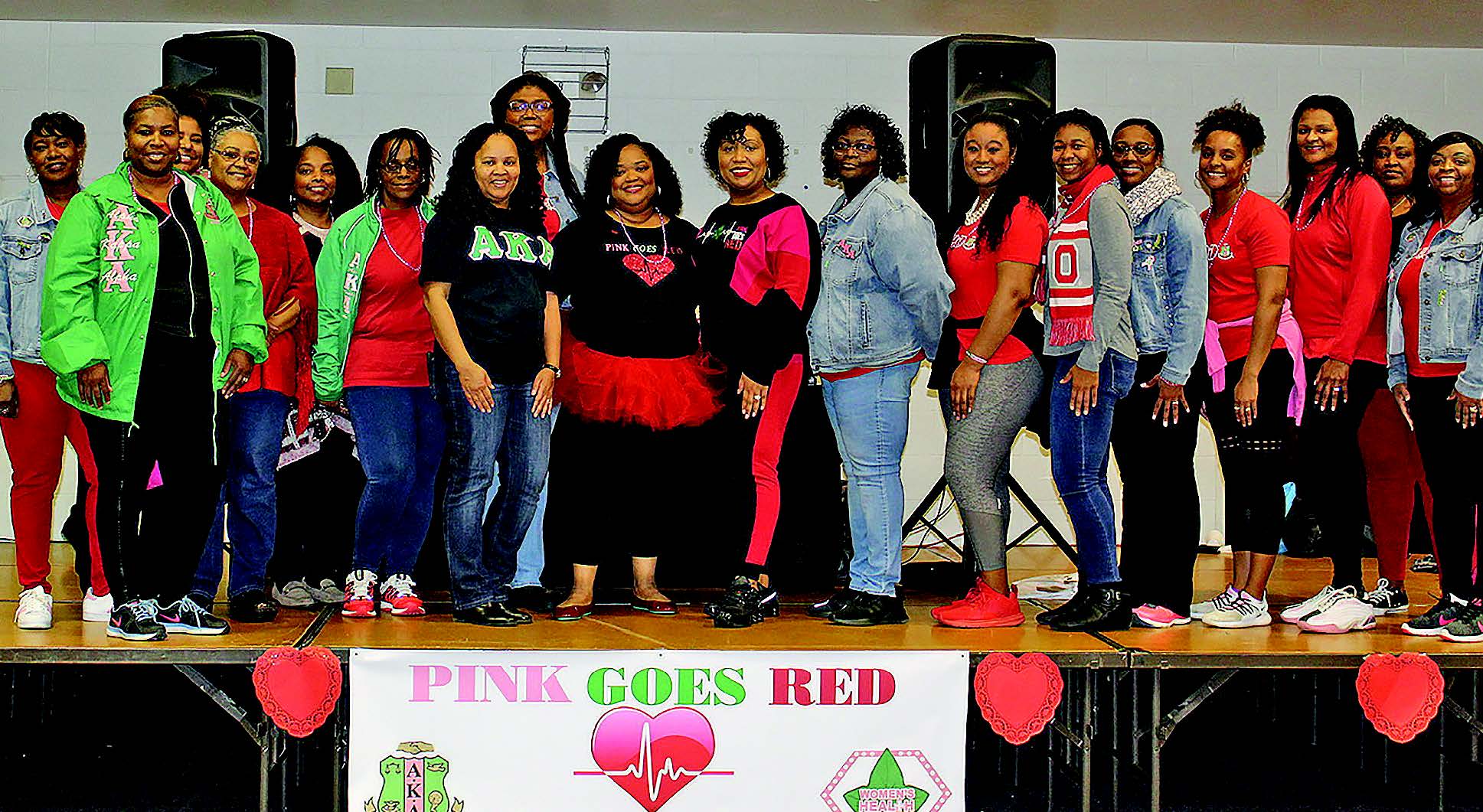 Women of all ages participated in physical activities and health screenings. Vendors were on hand to provide Pink Goes Red swag, heart health education materials, along with healthy snacks like protein shakes and nutrition bars. A portion of the event’s entrance fee was donated to the American Heart Association of the Triad.

According to the American Heart Association, approximately 50,000 African American women nationwide lose their lives annually to cardiovascular disease. According to 2018 statistics from the North Carolina Center for Health Statistics and Guilford County Health and Human Services Division of Public Health, heart disease is the second leading cause of death (behind cancer) in the county for African Americans (243), Whites (551), Asians (13) and Hispanics (9).

Crystal W. Boyce, president of the Beta Iota Omega Chapter said, “Alpha Kappa Alpha Sorority, Incorporated saw that it was important that we acknowledge heart health and the importance of that in individuals all across this country. On this day, the entire sorority celebrates ‘Pink Goes Red’ for heart health and we have partnered with the American Heart Association to do that.” Boyce said the sorority began this partnership two years ago and they will continue to do so to increase heart health awareness and heart disease prevention, especially among Black women.

Melanie Palmer, president of the Eta Omicron Omega Chapter says, ”Our focus is women, being that we are a sorority, but we want to raise awareness globally.” The chapter advocates for women’s health in High Point, N.C. by holding various screenings, having educators visit and provide literature on health. Palmer says their two top priorities are breast cancer and heart disease.

“A lot of African American women who have heart disease don’t even know that they have it because the symptoms are so different than just the clenching of the chest. Sometimes it’s nausea, vomiting, headache for days which leads to stroke, heart attack and, sometimes, death,” said Takela Anderson-McClinton, a Greensboro Nurse Practitioner.

Being aware of the symptoms of a heart attack and stroke is a start to preventing heart disease. Four key factors to the disease that cannot be changed are your age, gender, race or ethnicity and family history. According to The U.S. National Library of Medicine, maintaining a healthy diet, managing stress, not smoking and limiting alcohol are ways to prevent heart disease.

“To that one person that doesn’t want to go to the doctor, that doesn’t want to get checked out. I would just remind them of the implications and what can happen with heart disease. Even though she thinks it’s stress or she thinks it’s something else, there’s a huge chance that it could be her having a heart attack or on the way to having a stroke, or mini-strokes,” said Anderson-McClinton. “We’ve got to remember the people that love you. You have to take care of yourself in order to continue taking care of the people you are working for.”

Boyce said that nationally, the sorority will continue to make efforts to address the issue of heart disease, and local chapters like Beta Iota Omega will continue partnering with organizations across the triad to bring health awareness to their communities.

Alpha Kappa Alpha Sorority, Incorporated is the nation’s oldest sorority founded in 1908 by African American college women on the campus of Howard University (Washington, D.C.). Today, it has a membership of more than 300,000 active members worldwide.