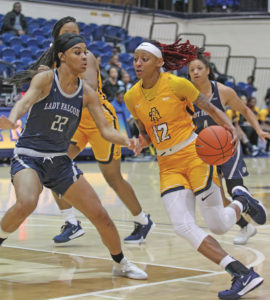 “I wasn’t happy with how we performed, but I’m happy that we performed like that and still got a win,” head coach Tarrell Robinson said.

Senior guard C’coriea Foy led the team with a game-high 23 points including 19 points in 14 minutes played in the second half. Foy also recorded five rebounds and three steals while shooting 10-for-17 from the field.

“She really picked up,” Robinson said. “I thought it was nerves with her. She missed a couple of layups early in the game and everything with Foy is based upon her confidence and her flow and I thought she got into her flow in the second half.”

The Aggies (5-3) started cold from the field (4-for-18), which allowed the Falcons (3-3) to remain competitive at the end of the first quarter as the Aggies led 10-9. But then the shots started to fall for N.C. A&T. The Aggies were 6-for-9 from the floor in the second quarter.

In the process, N.C. A&T scored the first nine points of the quarter to increase their lead to 19-9 with 7:35 remaining in the second quarter. McCray had seven points during the run. The Falcons would get to within eight twice in the second quarter, the final time with 1:38 remaining in the half. But the Aggies closed out the first half four straight points from Winters to take a 30-18 halftime lead.

“For some reason, we tend to get off to a bad start,” Robinson said. “Our first half, I don’t know if it’s jitters, but in the third and fourth quarters, we’ve picked it up over the last three games.”

The Falcons were led by Sha’nia Leach and Nia Phillips with seven points apiece.

The Aggies have 10 days between games with the next game against cross-town rival UNC Greensboro 5:30 p.m., Thursday, Dec. 12 at Corbett Sports Center.