Aggies Trample Bison at Homecoming, Head for Battle at the Border 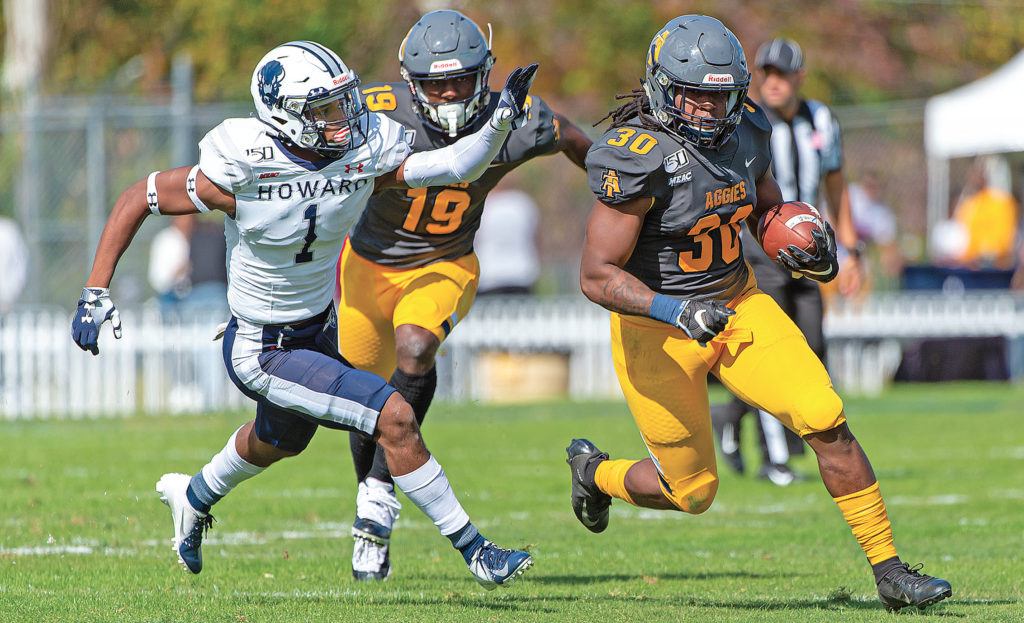 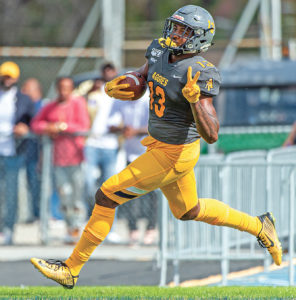 Senior wideout Elijah Bell (#13) had his best game of the season with five catches for 94 yards and two touchdowns. Photo by Kevin Dorsey/Carolina Peacemaker

As Homecoming sparring partners go, the 1-6 Howard Bison provided about as much resistance last Saturday as probably was expected from them – which honestly, wasn’t a lot to begin with.
After keeping things close for over a quarter, the undermanned Bison were eventually undone by their own talent deficiencies as A&T exploded for 24 unanswered points before halftime and cruised to an easy 64-6 victory.

Under clear skies and a gentle autumn breeze, an overflow crowd at BB&T Stadium saw the Aggies score a season-high eight touchdowns and rack up 574 yards of total offense, while A&T’s Blue Death defense held Howard to just 174 yards and recorded six sacks and a pair of interceptions.

When the dust finally settled and the GHOE crowd had migrated to other parts of campus, A&T’s football team was able to enjoy a major confidence boost after last week’s disappointing showing at Florida A&M.

“This is definitely the atmosphere we wanted for Homecoming 2019,” said A&T head coach Sam Washington, whose team improved to 5-2 overall and now 3-1 in the Mideastern Athletic Conference. “I thought the guys came out really prepared and really focused. The energy was fantastic. We had a very good week of practice and that’s where it all begins.”

It was the ninth straight Homecoming win for the Aggies, who have prevailed by an average margin of 32.4 points in those games.

Against Howard, A&T junior Jah-Maine Martin continued to stake his claim as the best running back in FCS football, rushing for a game-high 140 yards and three touchdowns on just seven carries. He now needs just 49 yards to become A&T’s ninth 1,000-yard rusher in the last 10 years.

Senior wideout Elijah Bell enjoyed his best game of the season, pulling down five catches for 94 yards and two touchdowns against Howard’s smaller defensive backs. On the other side of the field, A&T wide receiver Zach Leslie was just as dominant, catching four passes for 120 yards, including a 45-yard touchdown.

Defensively, the Aggies were led by true freshman linebacker Jacob Roberts who registered a career-high 15 tackles and three sacks. Afterwards he was awarded for those heroics by being named both the MEAC Rookie and Defense Player of the Week.

Both of A&T’s interceptions on the day were made by backup cornerback Chris Moseley, a redshirt senior from Page High School in Greensboro.

Now the question becomes just how much this minor tune up will prepare the Aggies for a much tougher opponent this upcoming weekend in the form of the 5-2 South Carolina State Bulldogs.

Kickoff is set for 1:30 p.m. on Saturday at Oliver C. Dawson Stadium.

“This is a very evenly matched game, and it should be a very physical ballgame,” said Washington, who has beaten SCSU four straight years. “It’s going to be a good football game. I tell you what; I would purchase a ticket for this one.”

Last year SCSU led A&T by 13 points in the first half, before the Aggies discovered their rushing attack and quickly pulled away after the break for a 31-16 win. A&T would finish with 311 yards rushing in that contest, with Martin contributing 94 yards on the ground and a long touchdown run.

This year, the Bulldogs are coming off an impressive 27-19 road victory at Bethune-Cookman, in which they held the Wildcasts to just 59 rushing yards and 4-of-13 conversions on third downs.
Prior to that contest, SCSU nearly upset FAMU three weeks ago, losing 42-38 in the final minutes on a 19-yard touchdown pass by Rattler quarterback Ryan Stanley.

The Bulldogs currently boast the second-best scoring defense (23.3 points per game) and second-best rushing defense (96.0 yards per game) in the MEAC, trailing only A&T in both categories.
They are led defensively by senior linebacker Cornelius Walker (37 tackles) and junior defensive lineman Tyrell Goodwin (five sacks).

“They play run defense with a lot of effort,” said Washington. “Even if one guy makes a mistake, there are 10 others running to the ball. They cover up their mistakes with effort. That’s what makes them a very tough football team.”