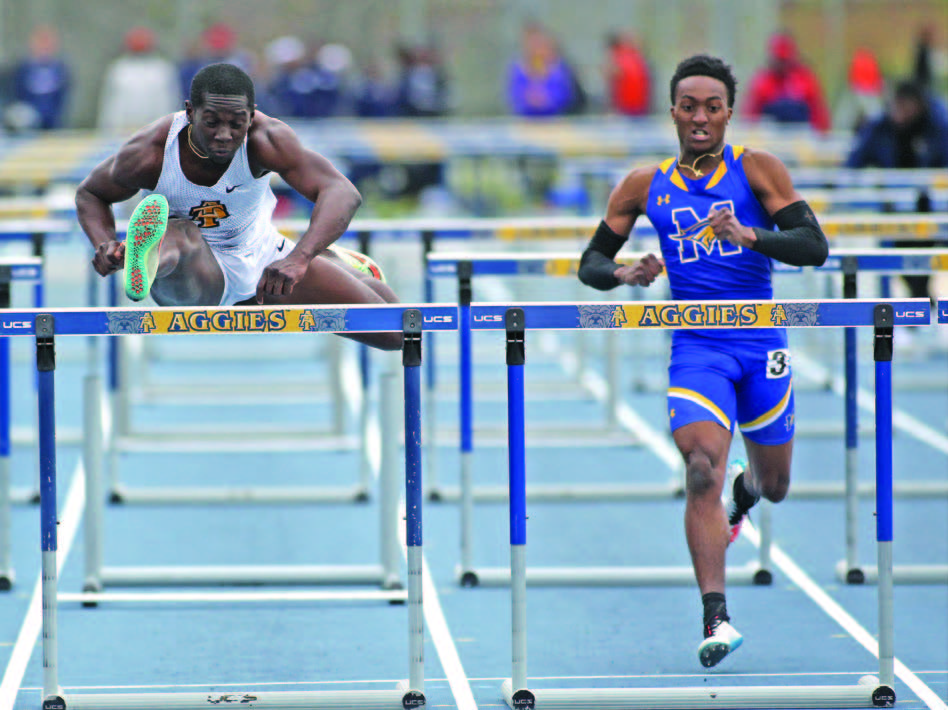 It is always great when North Carolina A&T’s championship and nationally renowned women’s and men’s outdoor track and field teams can compete inside its home facility, Marcus T. Johnson Track.

But there is more to the exercise than fans getting a chance to see the successful programs perform. A&T moved the annual Aggie Invitational from two days to one this week. That one day occurred on Saturday, and the Aggies used that one day to get some of their freshmen competition experience.

They also used the day to get some training done for some of their more experienced athletes. So, if you’re going to get some work in and experiment a bit, you might as well do it at your home facility.

“I think it (went) well today despite the cold weather and the wind,” said Duane Ross, the Aggies director of track and field programs. “We had some great performances, but at the same time, we got a lot of things done. This was a good weekend to get a lot of quality training in as we enter the second half of the season.”

Freshman Lashanti Williams made her collegiate debut on Saturday in a big way. Williams won the women’s long jump with a leap of 18-feet, 9 ¼-inches. She is now fourth in the Big South Conference in the event.

The men’s long jump also saw an Aggie freshman do well as Aeneas Reed jumped 22-feet, 10-inches to finish second. A pair of youngsters also did well in the men’s 400 meters. Sophomore Shemar Chambers finished first in 47.19. Freshman Reheem Hayles was a close second with a time of 47.23.

“I saw many good things from some of the younger athletes, some of the freshmen,” said Ross. “Lashanti’s performance was huge. We saw what we needed to see today.”

Some of the more familiar names to Aggie fans also did well.

Senior Rasheem Brown, a first-team All-American hurdler in indoor and the 2021 Mid-Eastern Athletic Conference (MEAC) champion, had a big-time performance in the 110 hurdles on Saturday. He ran a personal-best 13.59 to win the event. The showing also moves Brown to No. 7 in the nation in the 100H.

Junior Kenady Wilson found herself in the winner’s circle again. Wilson won the women’s high jump at 5-feet, 8 ¾-inches. It was her second win of the season after she won the Big South indoor championship. She is also the reigning MEAC outdoor champion and a 2021 NCAA outdoor championship qualifier.

Wilson is No. 1 in the Big South and ranks 28th nationally thanks to her 5-foot, 10-inch jump at N.C. State’s Raleigh Relays. Senior Nazah Reddick finished second on Saturday at 5-feet, 7-inches.

“We know Kenady’s talented, but she can go higher,” said Ross. “Seeing her compete today, but knowing she wants more is a huge plus for us.”

One of the most decorated women’s throwers in A&T history, graduate Loren James, secured another win on Saturday as she won the shot put with a throw of 51-feet, 3 ¾ inches. James, a six-time conference champion, was an NCAA regional qualifier last season in the shot put.

“The jumpers and throwers stepped up big for us this weekend and showed they’ve been listening to the message I’ve been delivering since indoors that everybody needs to step up and do much more,” said Ross.

The Aggies also got some work in for championship hurdler Paula Salmon. She ran the fastest 100H qualifying time on Saturday at 13.08 before sitting out the final. The Aggies also used the event to get their middle distance runners some work by using different events.

Freshman Fajr Kelly, who normally runs the women’s 800 and 1500M, ran the 400 on Saturday. Sophomore Jalen Chin, an 800 and 1500 runner, also got some work in the 400.
“Everything we do comes with a purpose,” said Ross. “When you see an athlete running outside their normal purpose, there’s definitely a training purpose behind it.”