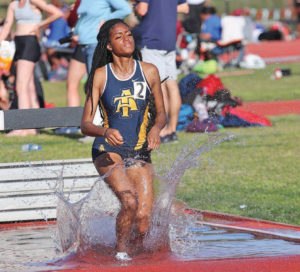 ELON – North Carolina A&T took many of its up and coming track and field athletes a few miles down the road to Elon University Saturday (April 6) to compete in the Phoenix Invitational at the Belk and White Field Complex.

The Aggies, who are a week away from hosting their own track meet on the A&T campus at Irwin Belk Track and four weeks shy of hosting the Mid-Eastern Athletic Conference (MEAC) Outdoor Track and Field Championships again at N.C. A&T, prepared their young athletes by coming away with four first-place finishes and four second-place finishes at Elon.

It was a big day for freshman Kamaya Debose-Epps who won the women’s 100 and 200 meters. Junior Kemarni Mighty, who is in his first season with the Aggies, won the men’s 400m at 48.40 seconds. Sophomore Joshua Faison also grabbed a win as he took first place in the men’s discus.

Debose-Epps competed in the 100 for the second straight week. In her collegiate debut in the 100 two weeks ago at High Point University, Debose-Epps ran an 11.73. On Saturday, she won the event in 11.91.

It was a blowout win for Debose-Epps with her closest competition coming from High Point’s Leah Bolden at 12.15. Debose-Epps made her collegiate debut in the 200m with overwhelming success as she captured the race in 24.59 finishing ahead of Elon’s Lauren Brzozowski who finished second in 24.87.

Freshman Malcolm Croom-McFadden also had a good showing over the weekend. He finished second in the 100 with a time of 10.76. In his collegiate debut in the 200, he finished fourth by crossing the finish line in 21.86.

Joshua Faison headlined a big day in the field events for the Aggies. by winning the men’s discus with a throw of 149-feet, 11-inches. It was his first collegiate win in his third overall collegiate event. Teammate and sophomore Aaron Wilkerson finished third in the same event with a personal-best throw of 147-feet, 4-inches.

Division I transfer Kevin Fofanah and Wheeler finished ahead of Wilkerson in the hammer as Fofanah finished third with his best throw landing at 173-feet, 5-inches. Wheeler was fourth recording a measurement of 168-feet.

The Aggies will host the annual Aggie Invitational, April 12-13 at Irwin Belk Track. They will also honor their seniors during the meet.